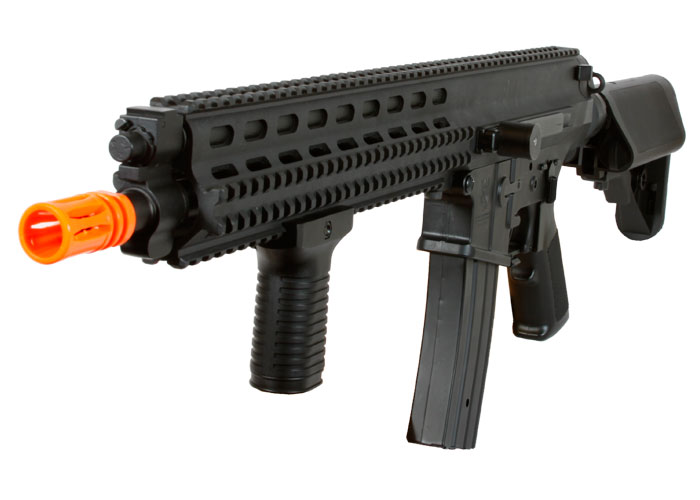 Today's product spotlight is pointed directly at the Echo1 Robinson Armament XCR-L Polymer AEG and I plan to illuminate the heck out of it.  For starters, how's about we play a little game I like to call, "What's in the box?"  Luckily, this box does NOT contain Gwyneth Paltrow's beautiful, yet severed head.  It contains the airsoft gun itself, along with a big ol' 9.6V 1500mAH NiMH nunchuck battery, battery charger, warranty stuff, stubby vert grip, mag winder tool, some other tool, and two (2) high capacity m4 magazines.

If you'd like to see the whole review, along with some gun pron, you'll need to click here:
Echo1 Robinson Armament XCR-L Polymer AEG Review
So the first question that some of the more astute readers will ask is, "What's the difference between this new Echo1 XCR-L and the first Echo1 XCR AEG that has been out for some time now?" 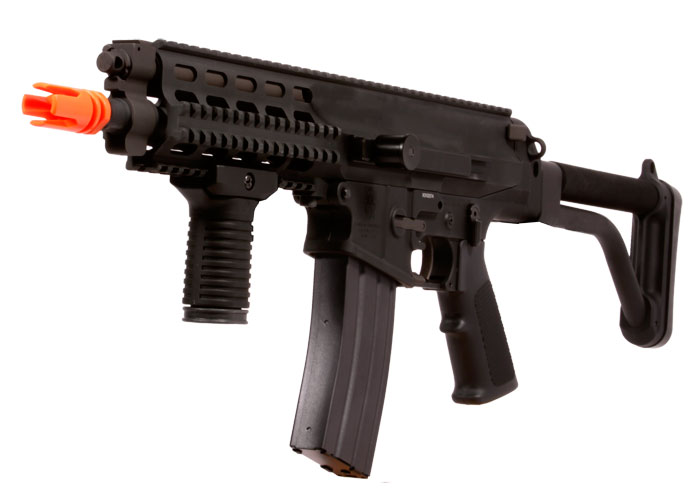 Perhaps the biggest difference on paper would be the price.  The Echo1 XCR-L Polymer edition is $235 cheaper than the standard Echo1 XCR, less than half the price (~55% less to be precise).  While merely a guess, I'm betting Brian Holt and the rest of the Echo1 crew thought it might be nice to offer an XCR at a more affordable price point.  The original XCR they produced is one they worked with VFC to create and for anyone who knows VFC, knows that there are two things that go with that name.  High quality and high cost.  So not everyone can afford a $430 gun.  Enter the Echo1 XCR-L Polymer AEG.  The majority of the the Echo1 Robinson Armament XCR-L AEG is, in fact, polymer, including the one-piece upper and rail system which I'm almost certain provides the explanation on how they were able to drop the costs of production so substantially.  The nearly all-polymer body also creates a very lightweight airsoft gun.  Like anything related to cutting costs, there are sacrifices that must be made and, in this case, I would say that in the case of the new Echo1 XCR-L, those sacrifices were made in the realm of durability.  The polymer front end is not going to be as sturdy as the front end on the full-metal Echo1 XCR by VFC, but I wouldn't say that this would be an issue at all, unless you sit or step on the gun for whatever reason.

Naturally, with the explosion of our industry within a pretty short amount of time, we are seeing a lot more licensing agreements being put into place, which, believe it or not, is a good thing as it helps to legitimize our industry in the eyes of the greater community beyond anyone who plays Airsoft.  This is America and in America, stealing someone's intellectual property is a violation of the law or something.  So I get rather annoyed when I see these idiots around the web complaining about licensing.  If you truly love Airsoft, then you will need to get on board with companies doing business the right way, which is the legal way.  All rants aside, check out the licensed Robinson Armament trades on that XCR-L lower.

One of the other things that I like about Echo1 producing Airsoft guns, is they usually include high cap magazines with their guns that feature a speed winding feature.  The only downside is that you need either the tool they provide you with, which looks like an old-time clock wind-up handle thing, or you can just use an Allen wrench, which is what I prefer.  Either way, it makes winding your high cap magazines a must easier process.
Here is a shot of the hop-up adjustment dial, which is pretty much a standard M4-style hop-up assembly.

Speaking of the buffer tube, that's precisely where the gearbox is wired to, so you'll need a stick-type battery with a small-type Tamiya connector.

So there you have the Echo1 Robinson Armament XCR-L Polymer Airsoft AEG, with an overview of its features.  Next week, we will take a look at the performance of this little beauty, along with a few other guns, so check back in again to get the word.