"If you go out in the woods today, be sure to bring your HK."

At last. The KWA HK USP Match Pistol has come under my possession. Many of you may recognize this as one of the two identical pistols that Lara Croft uses in the hit video game series, Tomb Raider, and it also appears in the movie adaptation starring Angelina Jolie. Although, I will point out that the guns Lara used were two-toned, black with a silver slide at times, and at others she used the all black version. But that is more of a "moo point." It's like a cow's opinion; it doesn't matter. I would think most of the veteran players that are reading this right now would probably wonder why I'm taking a look at a gun that has been out for so long and the answer is simply this: Because I want to. Is it so wrong to derive a little pleasure from this stuff every now and then? I'll freely admit to selfish motives here, as long as you freely admit that this gun is awesome.

Perhaps one of the most recognizable features of the KWA HK USP Match Pistol is the presence of the big ol' compensator on the front end that says "Match" in big white lettering. For the record, not only do I love suppressors, but I love pistol compensators as well. They just look cool. I suppose I should point out that compensators are not really purposed for aesthetics so much as they are for performance enhancement. Namely, recoil reduction and counteracting the effects of "barrel rise" by redirecting the gases as the bullet exits the weapon. At least that's what they're for when used with real firearms. Due to the nature of Airsoft guns, they don't serve as useful a purpose, but can help with barrel rise, depending on the compensator. 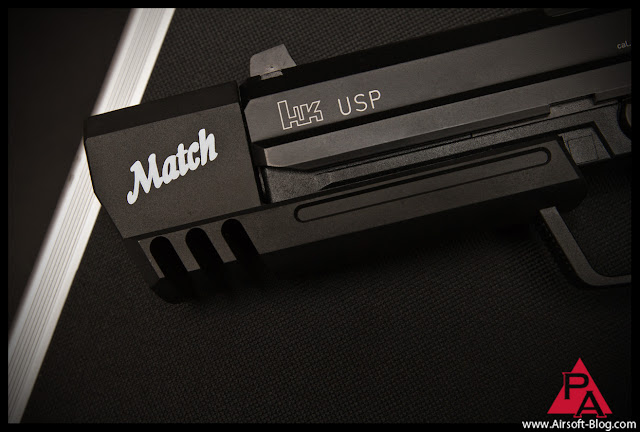 One of the other major characteristics of the KWA HK USP Match Pistol is the heavy presence of Heckler & Koch (HK) trademarks. Look above and below. They're everywhere!!! 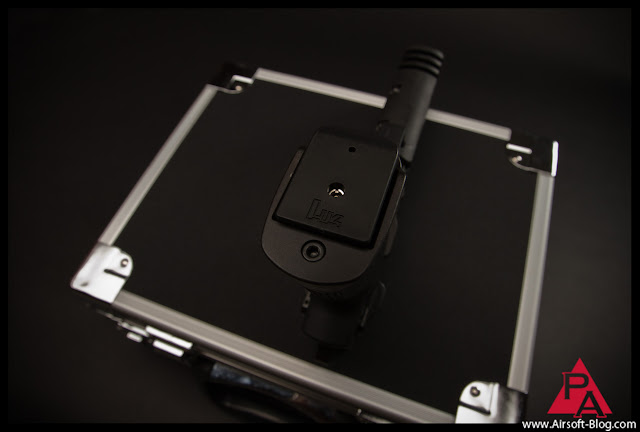 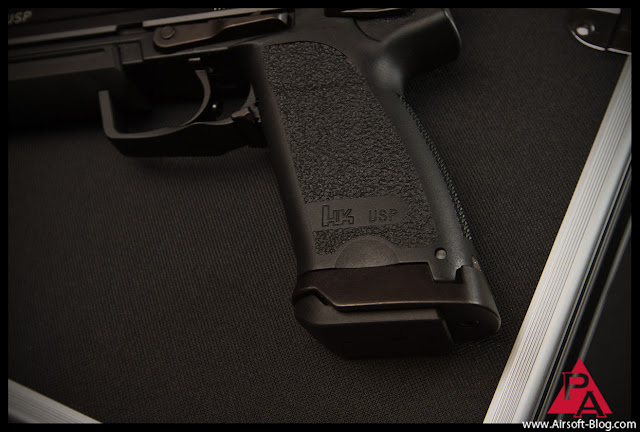 There's even a red HK logo laser inscribed (I'm guessing) onto the front of the already-sexy compensator. 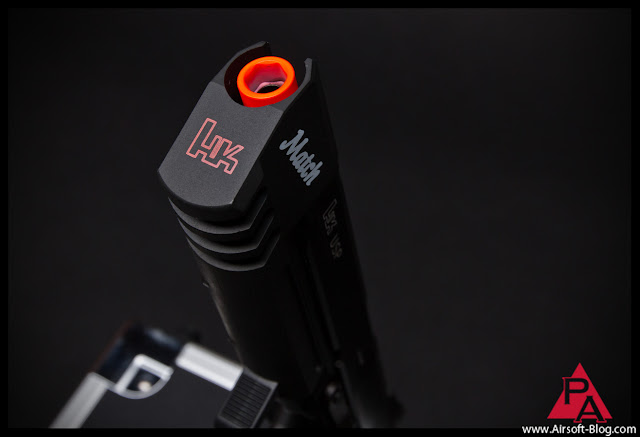 So that's already quite a few places on one pistol where they've got the HK logo, right? Well, they're not quite done yet. 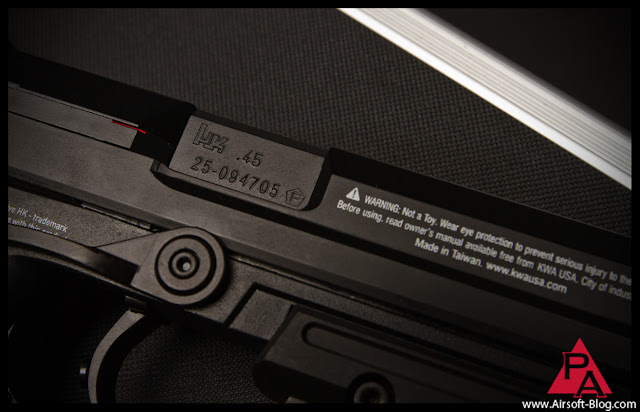 They even managed to get an HK logo on the adjustable rear sight, which makes it an even more unique little sight. 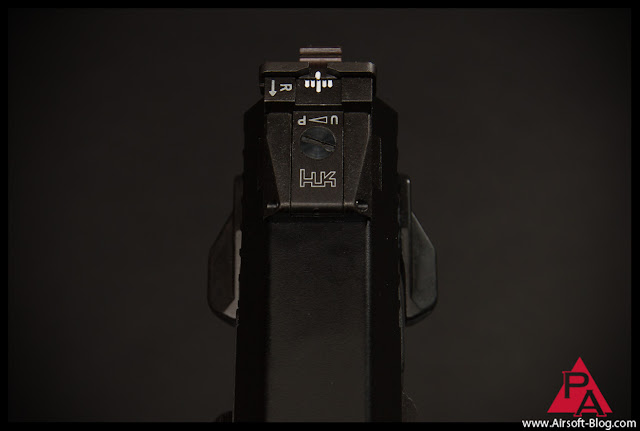 Ok, so that's the last of the HK markings on the KWA HK USP Match Pistol. Below, you will see how the compensator is attached. Two hex screws, with tiny washers (be sure not to lose them when you take them out of the box). 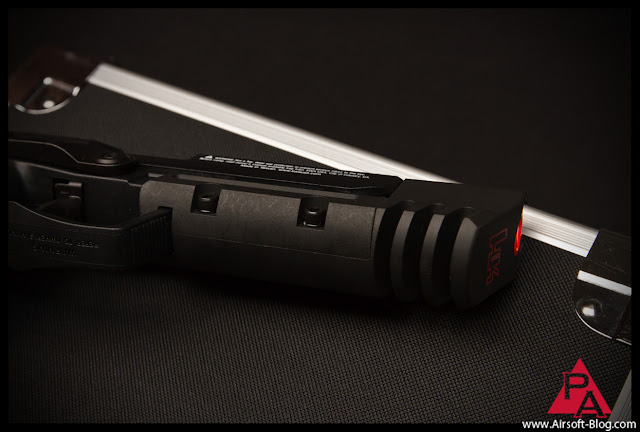 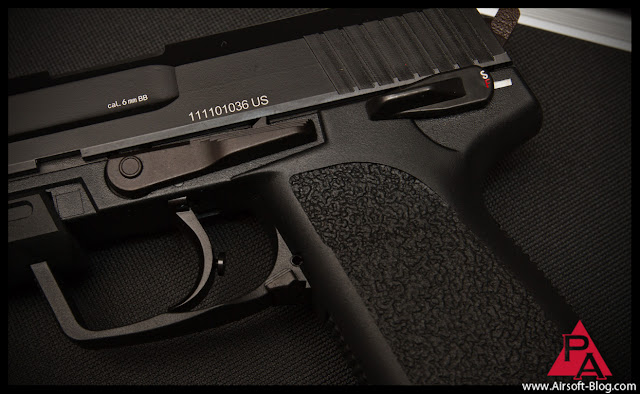 So there is a lot going on in the images above and below. Aside from the serial number on the slide, there is the ambidextrous fire/safety switch, which also functions as a de-cocking lever to bring the hammer forward without having to pull the trigger. Then, two of the more unique features to the KWA HK USP Match Pistol is the ambidextrous slide release, which you don't see on too many guns, and the adjustable trigger. If I'm not mistaken, this adjustable to the user's preference to assist in reducing the over-travel of the trigger. 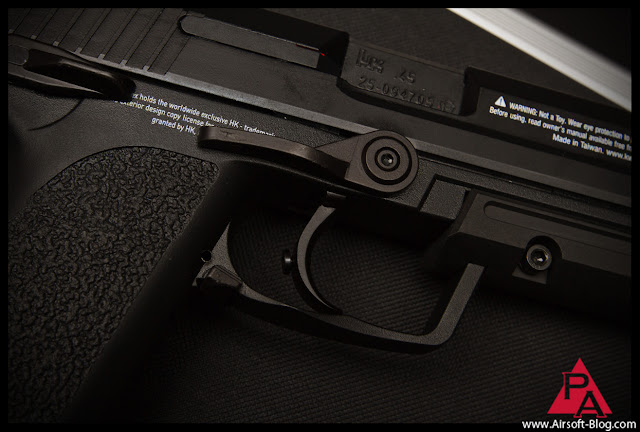 But wait! The ambidextrous controls don't stop there. Peep that mag release, dawg. 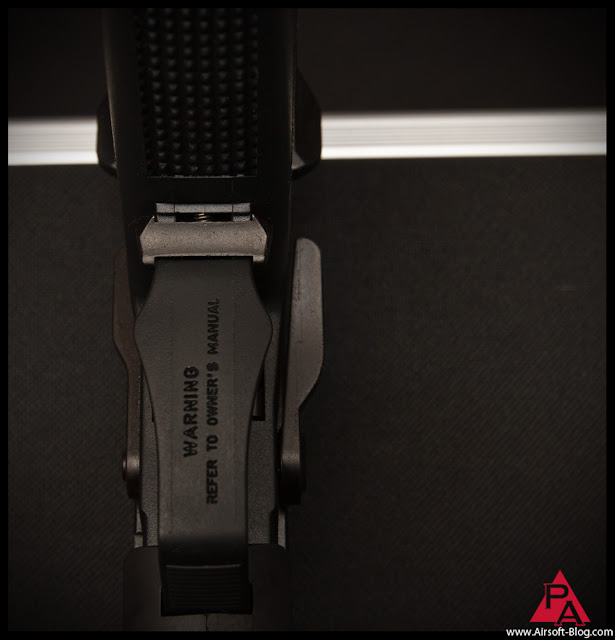 So there you have the features. In the next installment, we shall see how well this little handheld beast holds up on the firing range.

I love you. Goodbye.