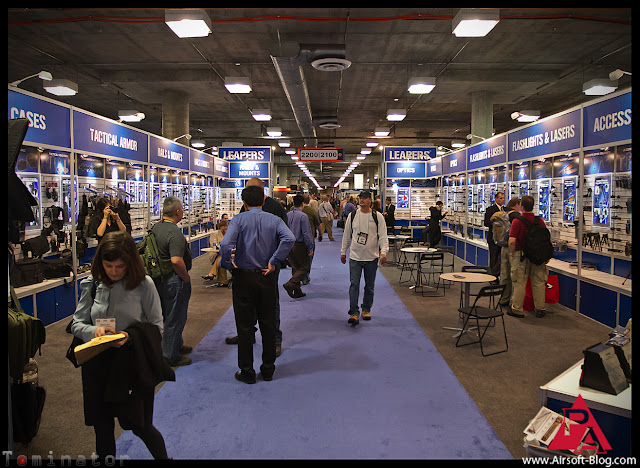 While I was en route to another booth whose name escapes me at the moment, I happened to walk through the Leapers booth, which was quite ginormous, so I figured, "Hey, what the heck?"  I like a number of their products, so I thought I'd stop and see what kinds of new things they have coming out.  I snagged a Leapers rep and away we went.  I was in a hurry, as I recall I had to be somewhere at sometime for something, but again, I don't remember.  'Twas a Shot Show blur.  Anyway, so I told the guy to pick like three or four of his most exciting new items to show me.  One of the first items was a new laser aiming device that enlarges the beam of the laser as the distance to your target increases so as to increase visibility of the laser.  However, looking back, I see that as much more of a hunting tool than for Airsoft (they also seemed to be marketing it for that, considering there was a 12-point buck on their literature).

Check out my photos of the new Leapers accessories along with some JUICY TRADEMARK INFRINGEMENT SPECULATION after the jump...

I happened to come across an opportunity to get a hands-on introduction to the new ATAC Flashlights from 5.11 Tactical two weeks ago and luckily I had my camera with me like a good little Pyramyd Airsoft Blogger.  So I snapped off a shot (with permission) of the five new torches from my favorite tactical gear company.  They are not the final production models, so some features (form or function) may change between the time this photo was taken and the time they are released for sale to the public.

Check out the new 5.11 ATAC Flashlights after the jump...