No, seriously.  I'm going to tell you how I cleaned my KWA HK45 Gas Blowback Pistol today. 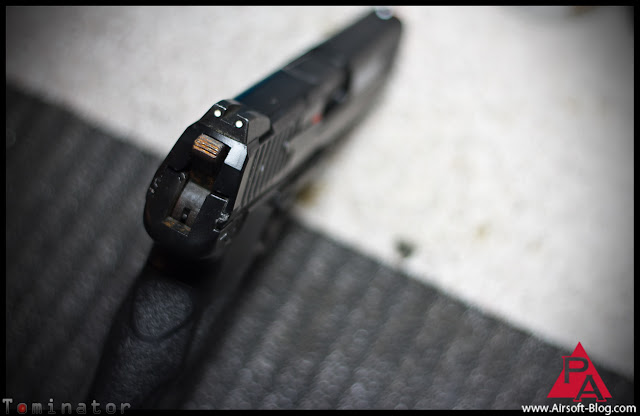 I can't say that this is the most exciting topic you could be reading about, but here are the cold, hard, ugly, boring facts, my friend: A dirty gun is a dirty no-good-so-and-so.  Sorry, for the offensive language, but a dirty gun is a bad story.  All that fancy Crye, LBT, and/or otherwise AOR1 gear won't mean a whole lot during the game if your gun is too dirty to function.  It will mean a lot in the parking lot and/or staging area of your favorite field though.

Don't tell Allen over at KWA, but I dropped my KWA HK45 in the worst kind of dirt you can drop an amazing gas blowback gun in.  That fine, almost-silky kind that gets everywhere, in every crevice.  If Allen was reading this right now, he would simply be shaking his head in quiet disgust, his face: expressionless.  So I figured it would be best to clean this beauty up as best as possible.

If you're curious to know how I went about cleaning my favorite Airsoft pistol, then check it out after the jump.  If you're not interested or even remotely curious, then I apologize, but just know that you have hurt my feelings.
Links to this post

Elite Force continues to churn out new stuff,
this time in the form of a Beretta M92FS gas blowback pistol.

Check out the full photo gallery with some specs after the jump...

WE Desert Warrior 1911 Slide Getting Stuck 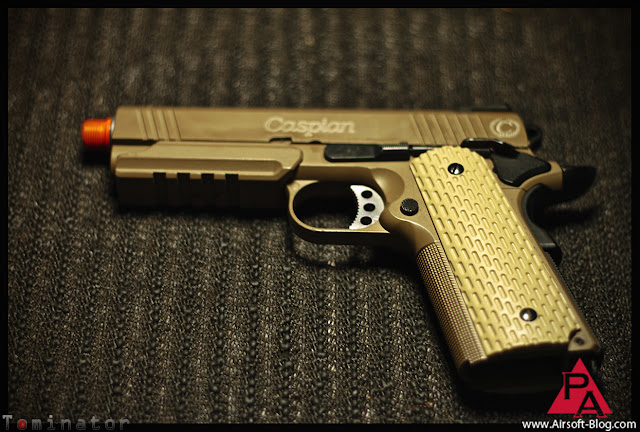 Alright, so I've been having some real trouble trying to figure out the solution to the slide on my WE Desert Warrior 1911 Gas Blowback Pistol getting stuck.  I know that it's definitely go something to do with the slide getting jammed on the outer barrel.  The outer barrel isn't getting pulled back enough on its own to move out of the way of the hop-up assembly.  It's kind of hard to explain, but here's a shot of what the situation looks like when the slide gets jammed. 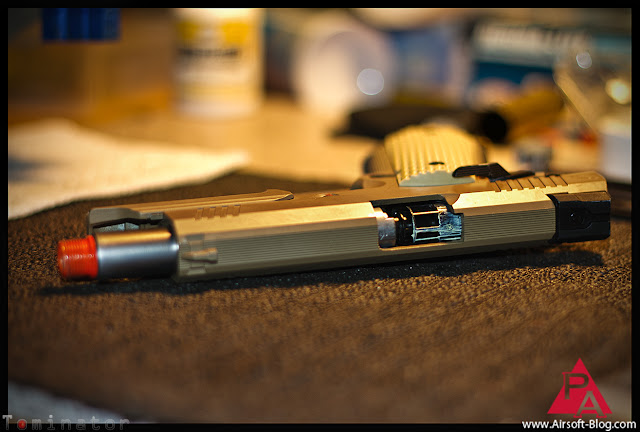 Sometimes it gets stuck without the blowback nozzle getting stuck as well.  I've investigated the nozzle issue and determined it not to be the issue.  The slide is getting hung up on the top of the outer barrel and on the bottom of the hop-up assembly.  Basically, it's a timing issue in effect, because the outer barrel is not getting pulled back soon enough before it catches on the slide and the hop-up assembly. 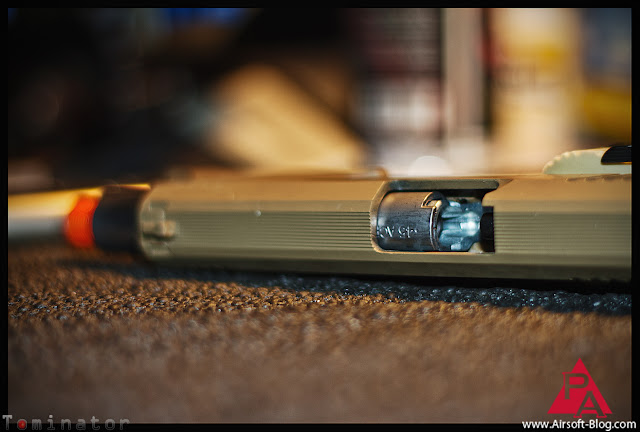 I had not anticipated this to be such a perplexing issue and had a much grander blog tutorial planned for you, but have just spent way too many hours trying to sort this out and had to put something online for you.


I've done a bit of Google searching for a solution, but based on a few of the top results from the first two pages, it doesn't really look like anyone has truly found the solution here.  There are definitely others who have had the same issue, so if any of you out there had figured this one out already, please feel free to share it here in the comments section below.  In the meantime, I'll keep at this and see what I can figure out. 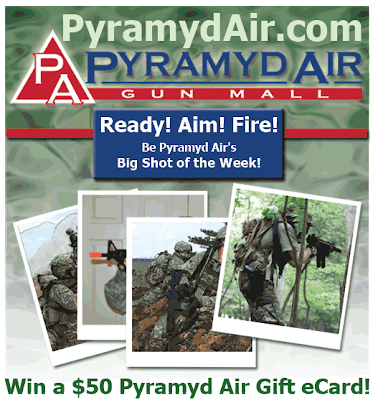 While at Shot Show 2012, Mike from KWA USA gives me the rundown on the new KWA ATP Auto GBB Pistol, which is the full-auto version of the highly awesome semi-auto ATP, along with a heads up on their new, original issue WWII-era M1911 GBB and last, but certainly not least, the new and ultra sexy, KWA Makarov gas blowback pistol. They surprised me with that one. Maybe I'm just out of the loop, but I did not know they'd be dropping that one on us. It was pretty awesome. Here's the video:

Could you use 50 BUCKS to boost the purchasing power of your next shopping spree at Pyramyd Air?  Check the image link below.

About six months ago, I began to notice how much time I was having to spend nursing my gas blowback pistols. I have several that I throw into rotation when I play, with the majority of them being Hi-Capa variants from both Tokyo Marui and WE with a Marui Mk23 SOCOM and one or two others as well. One common issue I was having was mag leaks. Not always a big blowout like you'll see in the video below, but a leak none the less. I've also gone through several loading nozzles in the Hi-Capas, including the Tokyo Marui 5.1. So I thought about it, talked to a few friends who not only use gas pistols but gas blowback M4s as well, read a bit online and came to the conclusion that I ought to give Green Gas another shot.

For those of you that didn't know, Green Gas is propane gas mixed with silicone oil and when I refer to using just plain propane, I am referring to those Coleman camping stove cans you can get at your local hardware or camping store for like $3-$4 a can, attach an Airsoft propane adapter to and use just like a can of Green Gas for filling your Airsoft green gas guns.  The only difference being that when using propane by itself, you must remember to add a drop or two of silicone oil to your adapter when filling your mag for the 10th to 15th time.  The number of refills varies, but that's the range I've commonly seen recommended over the years.  Some say as often as eight refills, but I don't know.  Anyway, now you've been brought up to speed here.

I had initially switched from Green Gas to Propane several years ago because once you get the propane adapter, it becomes an extremely cost effective solution for powering your gas guns on a per-can basis. The problem is a common one that applies to many other things in life. You might some savings on one end, but it'll end up costing you on the other end. For me, the primary cost was time, which I really don't have to be spending at my workbench, resealing gas mags and replacing loading nozzles. Now I realize there's a HUGE group of propane advocates out there. Within just a few short hours of uploading the video last night, I had a whole slough of fresh comments ranging from reasonable arguments to conspiracy theories from guys who have used propane successfully for quite awhile, it sounds like. That's cool. All I'm doing here is trying to share my experience and provide a different point of view. The cost difference between a can of propane and a can of green gas is something that can't be ignored. But for me, I have had a heck of a time being able to regularly drop in the silicone oil periodically. Whether I just forgot or I DID remember, but didn't really have the time to go through all my mags and lube each up them up. I realize this is more of a personal issue than anything else, but I know there are others out there who would just prefer their gear to work and not have to spend the majority of their free time working on guns. I'm not saying one should ignore taking steps to clean barrels & perform other procedures that contribute to the longevity of your Airsoft guns, but in this particular instance, I think the process of maintaining your gas guns can be streamlined quite a bit by simply using green gas. Yes, you're going to have to pay quite a bit more for it, but, personally, I still find value there.

If you're short on cash, then yes, Propane is a great way to make those dollars last longer, but it's simply going to take a bit more work on your part to keep your guns in good shape.

One last note to the conspiracy theorist out there. I was trying to keep the video short and sweet, so I cut out as much dead time as I could. I did NOT remove any o-rings or apply any other sneaky, underhanded techniques to get the mag seal to blowout. As God is my witness, for the propane mag fill scene, I literally just took a regular hi-capa mag that I knew to be functional and filled it with propane. Some have already stated that I over-filled it, which may be true, but I made it a point with the green gas to try and fill the mag for the same amount of time (~ 4 seconds) to see if I would get the same result of a blowout, which I did not. To me, this shows that green gas is easy on the mag. Apparently, to some of the trolls out there, it means nothing and/or that I'm just trying to sell Green Gas here. Well, I can honestly tell you that there is zero incentive for me to push green gas over propane and vice versa. I get no commission. Like I said, I'm just here to share my own experiences and point of view on the matter. Make your own choices based on what you think makes the most sense. There are advantages to both sides, as I see it.

Help us Dominate.  Please Nominate!
We appreciate your support!

My homies, Cliff & Andy over at Elite Force Airsoft have released a sneak peak at their new M1911 Gas Blowback Pistol.  There have been contentions on the Elite Force Facebook page that this is just another WE rebrand.  Well, sports fans, while I have yet to confirm anything with Elite Force officially, I did receive some reliable intel a few months back that Elite Force was partnering up with a rather unexpected, but legitimate & well-known manufacturer to handle this project.

Hello, sportsfans. Happy Friday. We made it through the week together! And what a week it was.  If I'm lucky, I'll be able to compartmentalize the memory of it way back, deep into the dark depths of my mind and never have to think of it again.  That's how good it was.  Therapy session over.

Today, I thought I'd share some photos with you, featuring the WE Hi-Capa 5.1M Gas Blowback Airsoft Pistol, which features a unique, sort-of-spaceage-futuristic design on the slide.

As some of you may know, I currently use the WE and Marui Hi-Capas exclusively as my sidearms of choice for Airsoft games because of their insane reliability and outstanding practicality. On top of all that, you can upgrade the crap out of them (literally, you can take the crap parts out and put any number of good parts in).

Check out today's Hi-Capa 5.1M Photo Gallery after the jump...