How to upgrade your Airsoft AEG for (almost) free

Today I'm going to show you how to upgrade your Airsoft AEG for quite possibly only a fraction of a cent (one penny). Two words:


Also known as Polytetrafluoroethylene, or PTFE, Teflon Tape ain't just for plumbers. It's great for anyone who loves air-sealing stuff and/or materials with a low coefficient of friction.  For the purposes of this little Airsoft upgrade mod, it's nice to work with something having both of those characteristics.  A roll of Teflon or PTFE tape or "Thread-Seal Tape" will run you between $1 - $2 at your local hardware store.  This mod only require a very small percentage of that entire roll, hence my assertion that this may only cost you a fraction of a penny.  I could be underestimating by a cent or two, but my point is, IT'S FREAKIN' CHEAP!!!

Special note, the beauty of this Airsoft upgrade mod is that it doesn't matter what type of Airsoft AEG that you are wanting to work on.  This trick will work for most of the AEGs you're going to find at a MilSim-type game.  Technically, although usually a different configuration, this will similarly on many gas blowback guns (rifles and pistols) out there as well.

So let's get right to it.  First, you'll need to disassemble your Airsoft AEG to the point that you have your tight-bore inner barrel and rubber hop-up bucking separated from the rest of the gun.  There is no reason I can think of that you would need to open up your gearbox for this particular mod, so if you've gone that far, STOP.  The inner barrel and hop-up assembly is located inside the upper receiver and handguard for the average AEG like the M4/M16 models, as well as the AK47s.  This should cover most everyone. 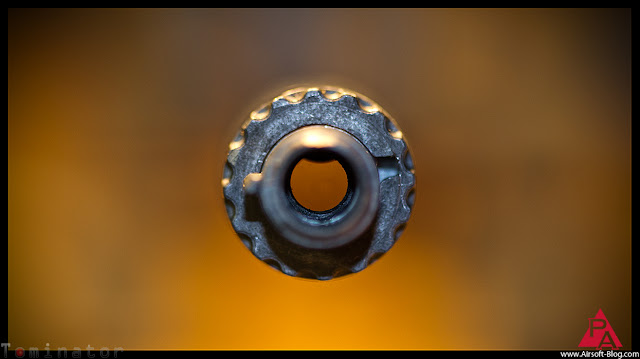 You don't need to have the hop-up assembled to press down on the bucking.  You can just use your finger, or what I do is use the shaft of a screw driver.

The importance of that little maneuver is almost unfathomable.  Without your hop-up bucking being seated in the most up-right positions, your Airsoft gun will not be as accurate as it could (all other things being perfect).

Anyway, once you've established that your hop-up bucking seated properly.  Carefully wrap your Teflon Tape around the point where your inner barrel meets the end of the bucking.  Three to four circumnavigations is all you'll need.  Anymore than that and you're going increase the already difficult process of getting the hop-up assembly back over the bucking without pulling the bucking off axis. 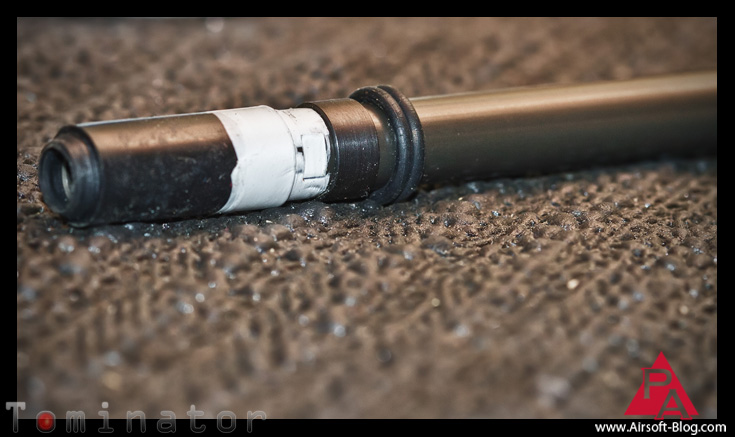 You'll want to wrap it firmly, but I said "carefully wrap" because when you first start the wrap, if you're NOT careful, you can disorient the bucking and you'll have to reset it.

Once you've got the bucking wrapped, you're ready to slide that hop-up unit back on.  I personally add one or two droplets to the outside of the bucking to make this process quite a bit easier.  I've seen that some assemblies just slide right on, while others are extremely snug even with a bit of lubrication. 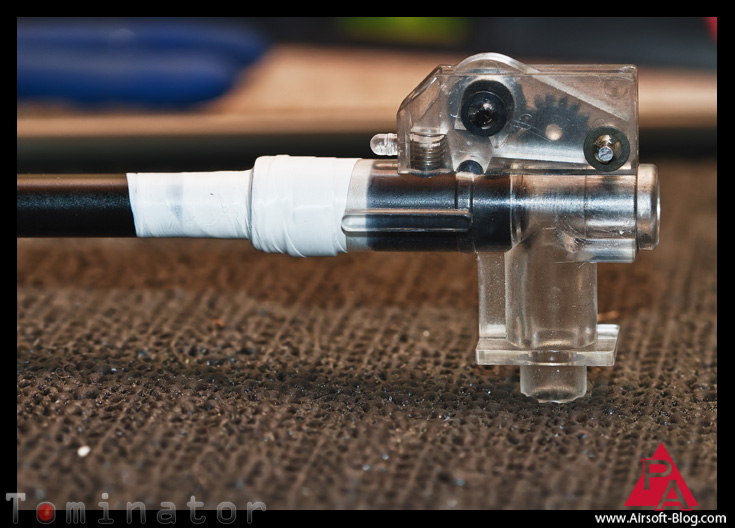 Here again, you'll need to exercise patience and care in sliding that hop-up unit back on as you may mess up the alignment of the bucking.  Once you get your hop-up unit back on and reassembled, you are probably OK to put the gun back together and get the Airsoft party started. 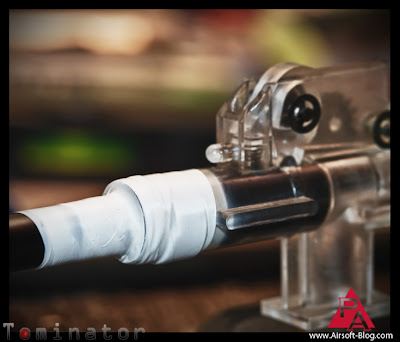 However, in the same exact manner that we wrapped the rubber bucking, I like to wrap the hop-up assembly three or four times as well.  This does a couple things:

1) Helps to keep the inner barrel from sliding around too much inside the bucking and hop-up assembly, especially if you've got a hop-up unit that slides over the bucking fairly easily.

2) Adds a 2nd line of defense against any possible air leaks out of that end of the hop-up.  Some of my engineering buddies tell me that this is sort of pointless for this purpose, but what the hell do engineers know about anything?  Plus, I'm a creature of habit and I'm used to doing it this way.  It makes me feel better.


3) In some of the M4/M16 AEGs that I've dealt with, it actually helps seat the assembly more snugly inside the outer barrel and enhances the seal between the Air Nozzle's entrance into the assembly and the gearbox, which is another potential point of leakage inherent in most AEGs.

In fairness, there are more ways to skin this metaphorical cat (don't actually skin your cat or anyone else's).  This is just my preferred method, which has netted some very consistent results on the chronograph. 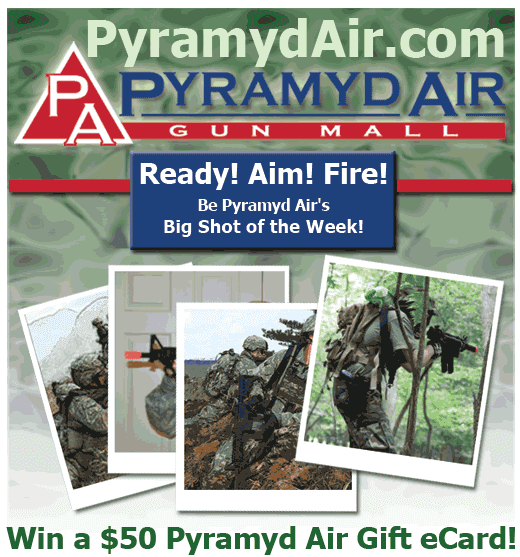