I got to hang out with the Echo1 GAT AEG again recently and I thought I'd share a few things about it here on the Pyramyd Airsoft Blog. I'm certainly intrigued by this popular, yet elusive Airsoft handgun.  Yes.  I said handgun (and Airsoft, too!).  In case you missed it the first time I reported on the GAT, check out my Shot Show 2011 update here. 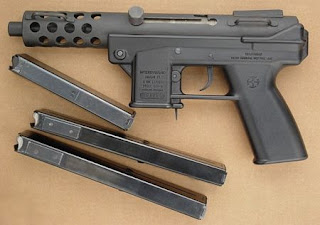 The Real Steel KG-9, Image Credit: Modern Firearms Encyclopedia
The real steel version of the Echo1 GAT AEG is the TEC-DC9, more notoriously referred to as simply the TEC-9 (It was one of the few firearms specifically banned by name in the Federal Assault Weapons Ban.  The TEC-9 was produced by Swedish firearms manufacturer, Interdynamic (who would later become Intratec), and is classifed by our friends the U.S. Bureau of Alcohol, Tobacco, Firearms and Explosives (BATFE) as a semi-automatic handgun or pistol.  It is NOT a fully automatic submachine gun, like I had initially thought.  Oh, what's that?  You already knew it was a technically a handgun but you didn't tell me because you were enjoying your sense of superiority in the knowledge department?  You smug turd.  Help a brother out next time, would you.  I feel like my whole world has turned upside down.  Apparently, thugs and other delinquents have modified their TEC-9s to fire in full-auto mode, but this is highly illegal, so I certainly wouldn't condone anyone do that.  Anyway, Intratec was run by a dude named, George Kellgren, who may or may not be Swedish and would eventually leave Intratec and start a new firearms manufacturing company whom some of you may be familiar with: Kel-Tec CNC Industries, Inc.  It seems that name is not just a random string of hyphenated alphabetic characters after all, is it?  Oh, you already knew that, too?  Well, darnit! Just sit tight then.  I've got a BUNCH of things to share with you after the jump, some of which I KNOW that you don't already know.  So check it!