-
If this isn't a sign that Airsoft is going to continue to grow in the future, then I don't know what is.
Well, today turned out to be a real treat.  I called up one of my besties, Trent F. Warren, and we went to check out Operation: Black Shield at SC Village.  I was particularly interested to see the new KWA FMT truck & trailer that I had seen the day before on their Facebook page.  "FMT" stands for Field Marketing Team, according to KWA.  Little did I know that their trailer was more than just a trailer.  It is a mobile showroom for all their guns, including ALL their known prototypes.  This thing was super fresh, super clean like Outkast. Heck, it even has air conditioning in it.  I wouldn't be surprised if they had a secret martini bar hidden away in there that flips out from behind a wall at the touch of a button.
While the big show was obviously the trailer, there was quite a lot going for their new Ford F250 Monster truck. Customized a la KWA. 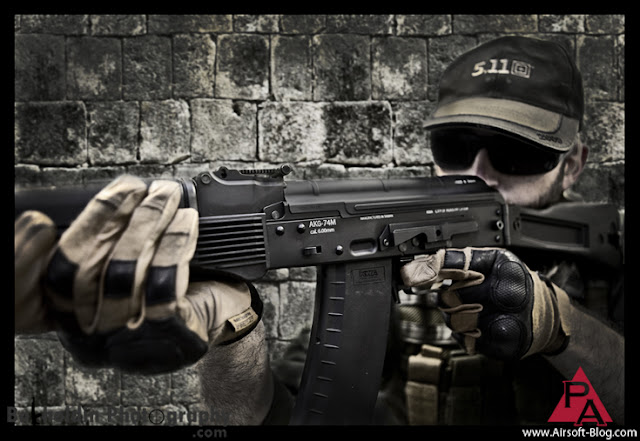 
Happy Monday. Today, I've got some more pics of the upcoming KWA AK-74 series Airsoft blowback rifles. In case you missed my Shot Show 2011 write-up on these particular beauties, I'll recap a few things for you.

One interesting feature of KWA's new Kinetic Feedback rifles is the electric cut-off, which activates once the last BB is fed from the gun's magazine.  Enhance realism...Enhanced winning.

*The AKG-74M (Gas Blowback) and the AKR-74M (Kinetic Feedback Recoil System) rifles are essentially the same, externally-speaking.  In the photogallery I've included after the jump, you'll notice I've combined my descriptions for these two rifles because of that fact.  There was no point in shooting the same design twice since we were only allowed to photograph the externals this time around.  There is still some super secret squirrel stuff going on over at KWA with these guns, so they weren't too keen on us leaking classified internals intel for the time being.

Check out the KWA AK-74 Photogallery after the Jump (or don't.  See if I care).
P.S.  I do care.  Please check out the photos.  I like the attention (even if it's negative).