So I've been working for quite some time on the making the Classic Army CA25 into an incredible Airsoft DMR machine who's performance will make your mother want to bake me a cake.

I've got no idea whether the situation pictured below is going to work, but I do know that time will tell and when it does, I will gladly pass the message along to you, my anonymous readers. Even if the news is bad, I have no problem saying so. Otherwise, you might think that it actually worked, then go out and try it yourselves, only to find out after your time and money has been spent that it doesn't work and then you will hate me and then I will be sad and upset because I can't stand when people hate me.

So here's a sneak peak inside the inner barrel & hop-up assembly of the CA25 Airsoft DMR that I'm building for you and for me (but really, it's so that I can shoot you from farther than you can shoot me). 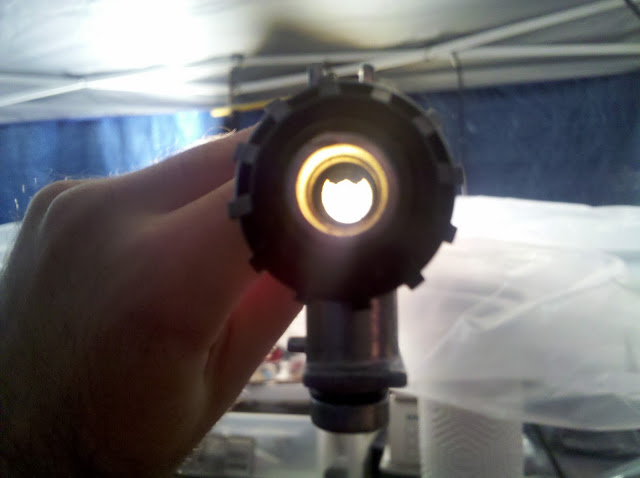 Listen, I've heard the argument and been called a sissy because I prefer long-range Airsoft rifles instead of grabbing a sub-400 fps assault rifle and getting up-close & personal with the OPFOR. Don't get me wrong, I've got a healthy portion of carbine rifles in my arsenal for just about any occasion, and just last weekend, I even put away the intimidation factor and ran a CA M15A4 Carbine at the Jericho Camp Pendleton MOUT facility for a while (which is actually located on the Marine Corps base itself, by the way).  But to be honest, you pro-assault gunners can look down your noses at me all you want, but while you're back at the respawn point killing time, I'll remain out in the field, sending more young thundercats to keep you company.

Alright, truth be told, I've actually been shot plenty of times by someone with an Airsoft rifle having less range than mine, however, DMRs are  better.  It's science.

Anyway, the point of this blog is to give you a little bit more of a glimpse of what the inside of the CA25 inner barrel & hop-up assembly look like after I've modified the CA25's hop-up bucking.

If you're wondering how I got the bucking nub to look like that, I'll tell you: with a razor blade and a soldering iron.  Now, in hind sight, the soldering iron may have jeopardized the integrity of the rubber when I melted/molded it, losing some of its softness, but if I don't test new ideas, I won't know which ones stink and which ones are completely ridiculous and embarrassing that I even thought it up in the first place.

I'll keep you posted on any and all developments on this very special project.

So I started upgrading the Classic Army CA25 AEG that I got from Pyramyd Air.  This is by far, my favorite rifle of all rifles in the world of real steel, so I'm actually ashamed of myself that it's taken me this long to acquire one, when I've been playing for years and have spent an shameful amount of money on other guns and projects.  Long story short, I am going to a masterpiece in the form of a long-range, semi-automatic sniper system in honor of the CA25's real steel counterpart.

To start, decided to work on the accuracy stuff first, since accuracy is much more important than how hard/far the gun shoots.  What difference does it make if your gun shoots 540 FPS if you can't hit the proverbial broad side of a barn?  First thing I did was swap out the stock inner barrel and replace it with a custom, 6.01mm diameter, 534mm length EdGI tightbore barrel cut to my specs by Ben Noji of PolarStar Airsoft fame. I chose the 534mm length because of the larger-than-normal cylinder volume that the CA25 uses. I measured the length and radius (diameter divided by two) of the CA25 using Mitutoyo Digimatic calipers to the best of my limited abilities.  My goal is to optimize the length of the inner barrel, which affects the volume inside the barrel so that there is maximum energy transfer to the BB upon firing the AEG.  I'm no physicist or anything, but I have figured out who to talk to about things like this, and that's basically what the purpose of this procedure is for.

So first, I had to take some measurements of the CA25's cylinder. 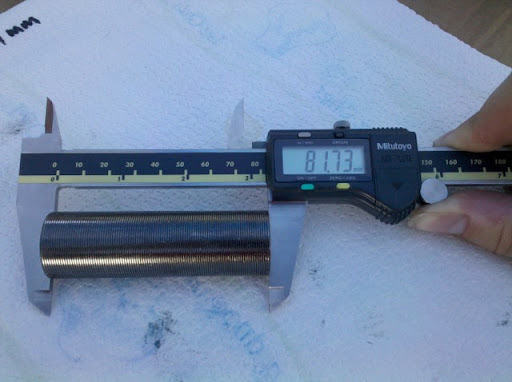 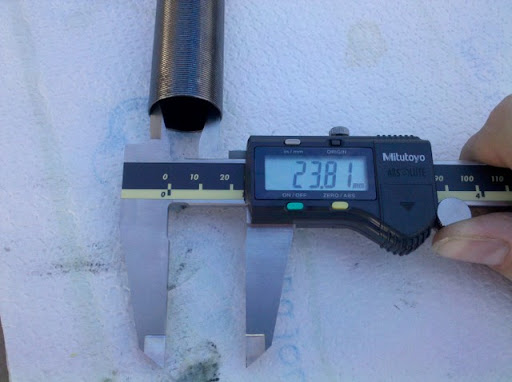 As stated in the super sweet title of the blog entry, my objective is to figure out what an optimal length for my inner barrel would be, based on a few pieces of given information and criteria.  I know I wanted a 6.01mm diameter barrel and the cylinder volume is set in stone, so that only left the height/length of the inner barrel TBD.  Through the use of my mad algebra skillz and the superb ability to solve for "X," I figured out based on the numbers I established and listed below, I was able to calculate that I needed somewhere around a 534mm-length inner barrel, which is actually slightly longer than the stock inner barrel that Classic Army put in the gun.  Here are the numbers:


So, long-story short, that's how I was able to calculate a relatively optimal length for my CA25 Airsoft DMR project. Next, I'll discuss what I'm experimenting with on the hop-up.

AEG Piston Mods - Removing Teeth is easier than pulling teeth, especially when you have a Dremel. Wait, what?

I would never suggest you Dremel your own teeth, you need those for chewing food, obviously.  However, if we were talking about piston teeth, then we have a different story.  I actually DO recommend removing at least one tooth for pretty much all types of setups, whether they are built for speed or for power.  Before you just go out to your Airsoft man cave and start filing away piston teeth, you need to know which teeth to remove or reduce.  You'll want to completely remove the 2nd tooth, which immediately follows the first tooth (weird), which is located on the end of the piston opposite the piston head.  You'll also want to basically file the 3rd tooth to about half it's original height (but probably not any more than that) as well.

The reason for doing this is to prevent the sector gear from prematurely engaging those teeth during a cycle.  Premature engagement is a problem for many guys out there and while embarrassing to have occur, IS a preventable situation.

Check out the photo below where I've taken the liberty of performing this mod to perfection. 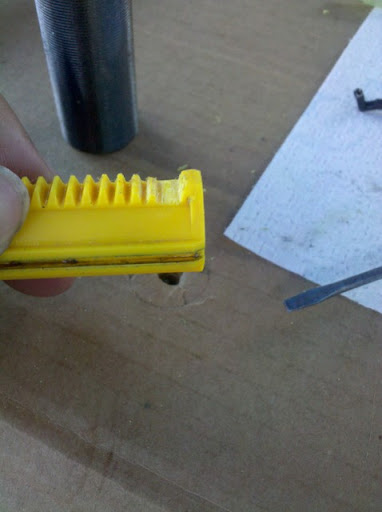 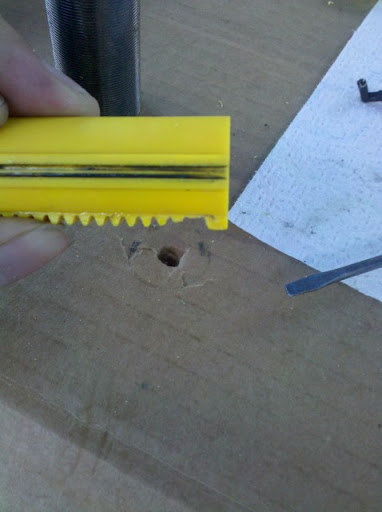 See, in the picture above, how the second teeth is completely removed, then the 2nd & 3rd teeth are reduced on a gradual basis?  You'll have to eye-ball how much you should remove within your own system, but this is the general idea.  Some setups may not require you to remove quite as much of the 2nd or 3rd tooth, so pay attention to what you're doing and think before you just start cutting things up.  This is yet another situation where my mantra of "Don't be an Airsoft idiot" applies.

Let's have a piston-measuring contest. Clearing the air surrounding the mysterious CA25 gearbox.

So, most of you already know this, but I know for a fact that not everyone does. The piston, cylinder and gearbox as a whole in the CA25 AEG is longer than a standard version 2 gearbox. I know, I know. Old news right? Well, yes, but I had a local Airsoft store manager try to tell me at a recent game that I could just use standard-length piston inside my CA25 gearbox. Well, not only is the piston in the CA25 longer, but it also has more teeth. PLUS, with a longer piston, you can expect the cylinder to be longer than a standard cylinder. And since the piston has more teeth, a standard sector gear will not suffice when used inside the CA25 gearbox. The CA25 sector has a few extra teeth than normal. Plus, even if you did find a regular sector gear that fit the CA25 gearbox and used a regular piston, because of that extended cylinder, your standard sector gear will not pull the piston back all the way, leaving a considerable portion of unused air volume within the extended cylinder. So in terms of energy transfer, you've created a serious inefficiency.

If you don't believe me, like that idiot I talked to on the field, check out this photo. 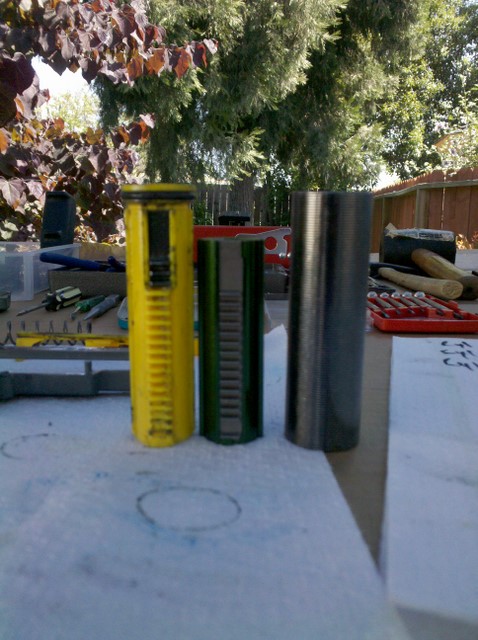 Eat some crow, nay-sayers. The proof is in the piston.  If you couldn't figure it out on your own, the cylinder on the right is the CA25's extended cylinder, the piston in the middle is a standard-length JBU piston and the long, sexy yellow piston on the right is the man of the hour.  Notice how the polycarb teeth on the CA25 piston

Long story short: make sure that if you're going to upgrade your extended version 2 gearbox like the one used in the CA25, you need to make sure you get a piston made for that specific gearbox, as well as gears that are also made with extra teeth to accommodate that extended piston.

Have a nice Airsoft day.
Links to this post
Home