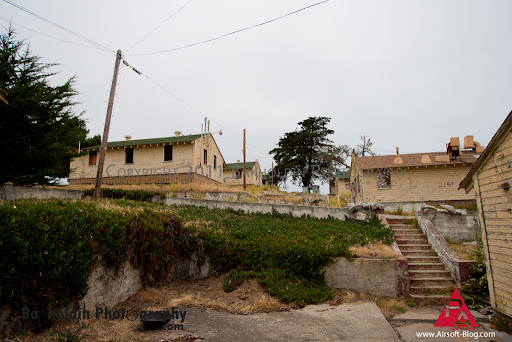 As many of you now know, California Senate Bill 798 () was voted down by the Assembly Public Safety Committee on Tuesday (June 21, 2011).  This was a significant victory for the shooting sports and hobby industries like Airsoft and Air Guns, considering we were definitely the underdogs in this battle.  I say battle, rather than war, because the war is not over yet.  SB 798 is scheduled for reconsideration in the next couple months, and it would be a safe assumption that Senator de Leon is not going to give up this easily.  Expect de Leon to amend his bill to address some of the many issues with it in its current form.  Now is not the time to sit back and relax, thinking we're safe for the foreseeable future.  There is still much work to be done.

Prior to Tuesday's Assembly hearing on SB 798, there were several events going on over the weekend in different parts of California.  Dave Bakholdin, of Bakholdin Photography, was kind enough to share his photos with the Pyramyd Airsoft Blog from a fundraising event by Roundhouse Productions to help fight Senator Kevin de Leon's SB 798 legislation, which was recently defeated (temporarily) during the June 21, 2011 hearing by the California Assembly's Public Safety Committee. 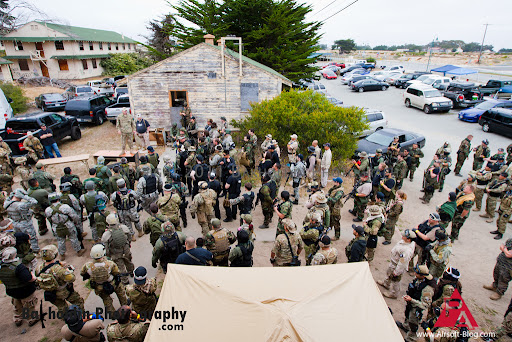 The event took place last Saturday, June 18, 2011 at Fort Ord, in Monterey, California and attracted over 250 players who came out to show their support for rejecting the bill.  The event raised close to $3,000 that will be donated to the Airsoft Safety Foundation to assist with the costs of fighting and on top of that, players were able to fill out letters of opposition that would be mailed to the California Assembly members.

The day didn't just consist of Roundhouse hosting a rally against .  There were BBs to be fired as well.  The gaming began after the morning rally and lasted all day.  There was a massive raffle that had to be broken up into four parts throughout the day because sponsors had donated so many prizes.

For those of you curious about a little background on Roundhouse Productions and some additional details about this particular event, Dave has graciously provided us with some factoids to fill you in. He writes: 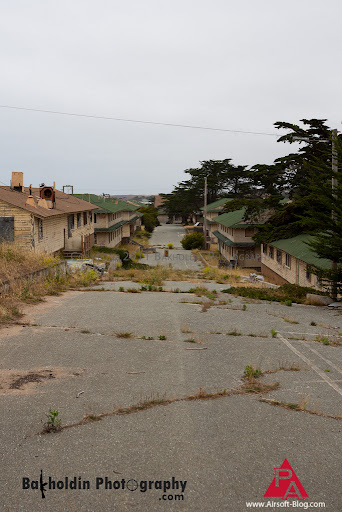 "Roundhouse is run by best friends, Sean St. Cin and Alex Eng.
They began hosing games in the year 2000 at Fort Ord. They have had several fields on the old Monterey, California military base and they are as follows:
- The Prison
- Holt's Bay
- Hayes Circle
- Crossroads
- Heartbreak Ridge (current field)
They introduced the CQB Challenge, which for many years pitted the West Coast's best teams against each other in a skills-based shooting competition.
They have been at the current field for three years now.
Over the past decade they have averaged 250 per game. They run one game a month, usually on the 3rd Saturday of the month.
They also put on one large-scale, three-day Op per year on their field, the AI 500 - OP: Red Reign.
They put on the AI 500 - Operation: Blackjack at the MOUT facility on Camp Blanding in Florida a couple years ago that I personally flew across country to attend. To this day, the Camp Blanding MOUT facility remains the best field I have had the pleasure of playing on.
Over the years, Roundhouse has set itself apart from the rest by offering the Airsoft player more than just a place to play. They have established a reputation for themselves for having detailed scenarios that require planning and teamwork in order to meet your objective. These aren't your mother's Airsoft games. They make you use your noggin as much, if not more than, your trigger finger. However, with their average attendance being as high as it is, there are plenty of opportunities to use that particular finger. Many of the games that Roundhouse puts on have intricate back-stories with multiple role-players and progressive objectives designed to get everyone at every skill-level involved. Over the years, the guys at Roundhouse have employed all sorts of cool props as well. There have been parts of a downed UAV, brief cases, Humvees, technicals, troop carriers, mortar tubes, satellite dishes, and even a military command center housed in an air-conditioned semi truck trailer.
Registration for games is done online at their website www.cqbchallenge.com. Upon registration you choose which side you will play based upon assigned BDU patterns. This has been a huge advantage when playing with groups more than 20 or 30 and has set them apart from anybody else whop puts on regular games. No arm bands, no guessing, just distinct BDU patterns that significantly cut down on the amount of friendly fire, that, of course, isn't so friendly, when you think about it. 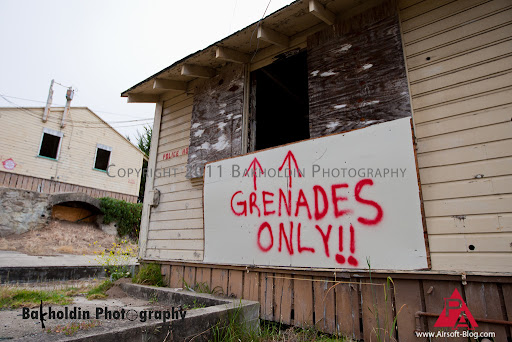 The current field Heartbreak Ridge in set on the northwest portion of the base which was used as troop barracks. There are over 40 buildings in the field with most being two-story dorms. It takes skill and teamwork to take a building, not to mention plenty of Thunder B grenades. All indoor fighting must be done with pistols, there are plenty of reminders painted on every entrance to buildings as a safety measure. On a typical day at the Ridge you will hear a Thunder B go off about every three or four minutes.

During last Saturday's OP: Stop SB 798, the first game had the REDFOR (Multicam and Desert) start on the southwest corner of the field while the BLUEFOR (Woodland and ACU) started at the northeast corner with one exception. ACU was pre-deployed into the Embassy and Onyx Bar (the objective buildings). 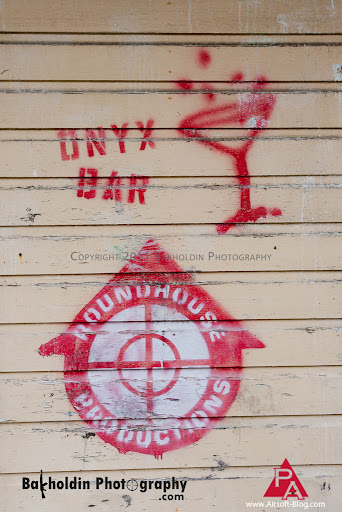 Whoever held the buildings at the end of 90 minutes would be declared the winner. One twist was that no member on the BLUEFOR other than those in ACU could enter the target buildings. In my opinion, it was a nice twist to keep things balanced.
For the second game, Sean split the field into three elements and the goal was to take control on the embassy. Again, the game was set up to keep people moving and guessing.
Overall, it was a successful fundraising event to fight SB 798 and a great day of quality Airsoft gaming."
There you have it.  I can vouch for the things Dave mentioned, having attended several Roundhouse events as well.  Sean and Alex have an impressive ability to effectively managed games of that size without having it turn into a chaotic mess, as I've seen occur at several other large, non-Roundhouse events I've attended in Southern California recently.