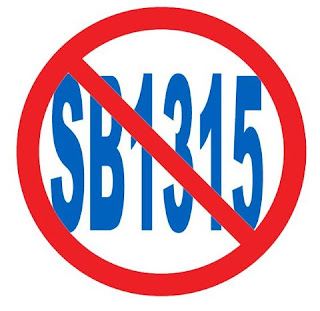 With his continued pursuit of passing SB 1315 Senator Kevin de Leon seems hell-bent on not only taking away our freedom, one Airsoft gun at a time, but also doesn't seem too concerned about the tax dollars he'll be losing, which I'm pretty sure help pay his generous little salary.  Make sure to call your local district's representative to let them know you oppose this bill.  Don't be rude.  Just be professional and polite.  Think of what you're going to say ahead of time if they ask you why you oppose the bill.  Try not to sound like an idiot. 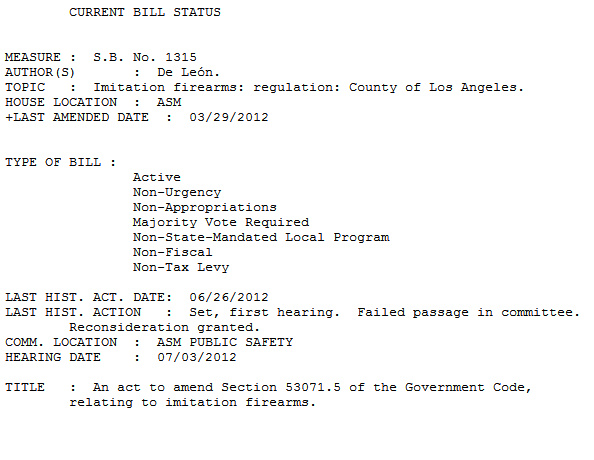 As some of you may have heard, SB 1315 has passed the Senate Public Safety Committee, just as SB 798 did, as I recall. No real surprise there. I believe it was the House of Representatives where we achieved victory last time and that's where it needs to happen once again.

Once again, we need to make some phone calls and write those letters to your local representatives. Here is a link to their contact information:

Here is the bill in its amended form.

FEBRUARY 23, 2012 An act to amend Section 53071.5 of the Government Code, relatingto imitation firearms.

This bill would provide an exception to those provisions byauthorizing the County of Los Angeles, or any city within the Countyof Los Angeles, to enact and enforce an ordinance or resolution regulating the manufacture, sale, possession, or use of aspot marker gun that expels a projectile larger than 16mm
that is more restrictive than state law regulating themanufacture, sale, possession, or use of any BB device, toy gun,replica of a firearm, or other device that is so substantiallysimilar in coloration and overall appearance to an existing firearmas to lead a reasonable person to perceive that the device is afirearm and that expels a projectile that is no more than 16millimeters in diameter.

THE PEOPLE OF THE STATE OF CALIFORNIA DO ENACT AS FOLLOWS:


SECTION 1. Section 53071.5 of the Government Code is amended toread: 53071.5. (a) By the enactment of this section, the Legislatureoccupies the whole field of regulation of the manufacture, sale, orpossession of imitation firearms, as defined in subdivision (a) ofSection 16700 of the Penal Code, and that subdivision shall preemptand be exclusive of all regulations relating to the manufacture,sale, or possession of imitation firearms, including regulationsgoverning the manufacture, sale, or possession of BB devices and airrifles described in Section 16250 of the Penal Code. (b) Notwithstanding subdivision (a), the County of Los Angeles,and any city within the County of Los Angeles, may enact and enforcean ordinance or resolution regulating the manufacture, sale,possession, or use of a spot marker gun that expels a projectilelarger than 16mm. that is more restrictive than statelaw regulating the manufacture, sale, possession, or useof any BB device, toy gun, replica of a firearm, or other device that meets both of the following requirements: (1) The device is so substantially similar in coloration andoverall appearance to an existing firearm as to lead a reasonableperson to perceive that the device is a firearm. (2) The device expels a projectile that is no more than 16millimeters in diameter.

It would seem that I predicted one of the amendments almost correctly. Rather than just dropping the number one, they just changed the wording to exclude all guns firing projectiles no larger than 16mm. That way the Paintballers can continue to thrive. That's cool. They played their cards better than we did and got better, more well-connected representatives. I'm all about working smarter, not harder, so I, unfortunately, find no fault in what they did. I would have done it, too, had I the same resources available to me. I realize I hit a nerve last time I mouthed off about paintball guns looking ridiculous and that notion still stands, Steve.

But do I hope that Paintball gets banned as well? Absolutely not. I DO hope that Senator De Leon would find something a little more constructive with his time than pursuing this and other frivolous bills. Are you telling me that our state has solved the education, unemployment, and overall budget crises (yes, plural for more than one crisis)?

Speaking of representatives, what's the deal with the Airsoft Safety Foundation. As I understand it, it takes a bunch of money to become a member of this non-profit organization, which is supposed to go towards funding some sort of lobbyist on behalf of the Airsoft industry. There are a ton of members, which means, in theory, that the Airsoft Safety Foundation now has a ton of money to help fund the countermeasures to this legislation. Aside from wondering what their audit report looks like, I wonder what the Airsoft Safety Foundation has been up to since the demise of SB 798. The only update I recall seeing from them since, was to announce that SB 1315 has passed the Senate Public Safety Committee hearing. Might I suggest taking a proactive, rather than reactive, approach to this one, guys? While I may be a bit critical at the wrong time here, what I'm really trying to say is that we all need to step it up again, not just rely upon the Airsoft Safety Foundation, especially since we have no real idea whether or not they're actually doing anything since there's no transparency, and in all reality, even if we win, we will need to maintain that higher level of safety consciousness and responsibility indefinitely. I knew that as soon as SB 798 blew over, we'd all go back to just chillin', and not worry pretty much at all what might be on the horizon from Senator De Leon. Sure enough, it was all quiet on the western front almost immediately afterwards and now De Leon is back, trying to weasel his way into our world so he can shut it down.

Bottom line is that we need to cut the crap and either upgrade our mindset to become much more safety conscious and much less complacent with our Airsoft guns, or we should find a new hobby because this one will becoming illegal in just a few short months. What's it gonna be, players?