by Paul Hudson
exclusively for PyramydAir.com. Copyright ©2009 All Rights Reserved

The Air Venturi HaleStorm is an interesting new precharged pneumatic repeating rifle in the affordable class. It's attractive, well-finished, accurate and powerful. It also includes some features not found on other rifles in its class. Air Venturi imports this rifle from the Turkish manufacturer Hatsan. It's available in .177 and .22 caliber, and I've spent a couple of months testing the .177 version.

A good-looking rifle
At just under 40 inches long, the HaleStorm is almost an inch shorter than a Beeman R7 and a half-foot shorter than an R1. The ambidextrous stock is a tight-grained hardwood with a medium-brown color and sports an even matte finish. No stain is used, so any scratches can be repaired without attempting to match the color. For adaptability to different shooters and positions, the buttpad is vertically adjustable by loosening a single bolt. The non-slip buttpad also does a good job of keeping the rifle steady on your shoulder. Weighing a bit over 7 lbs. without a scope, it's also a pound or two lighter than magnum spring guns and would be easier to carry in the field for a day. Checkering on the pistol grip along with a relief along the top of the forearm make the rifle easy to hold steady. A sling would be an easy addition and can be mounted without applying tension to the barrel.

Excellent fit and finish
The bluing on the reservoir, lower receiver and barrel is a very even, attractive black, and the metalwork shows a high level of finish. The aluminum receiver is finished in a matte black. The wood-to-metal fit is also done well. It's obvious that Hatsan is producing a quality rifle. 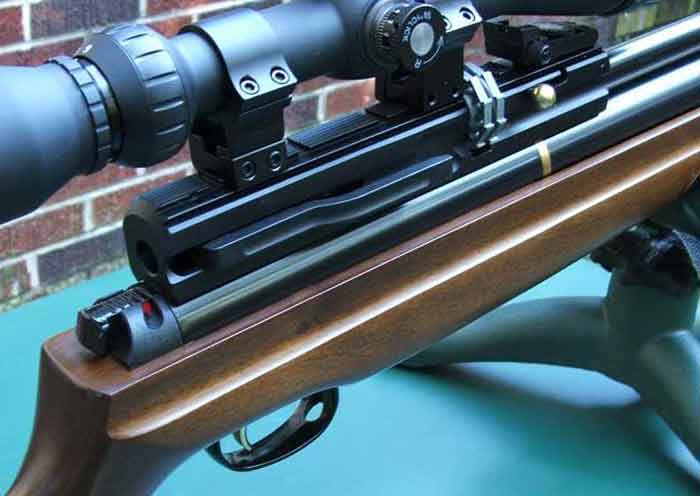 The finish is excellent for this price range. The magazine sits low in the receiver and is released by moving the brass knob forward.

The sidelever is easy to operate. You can shoot the rifle from a bench without having to move your left hand or even take your cheek off the stock between shots. Pulling the lever back cocks the striker, sets the safety and advances the magazine. Closing the lever pushes the pellet into the barrel. The two-stage trigger has a long first stage set by the factory. The second stage breaks smoothly and predictably. While the trigger is a little heavy (4 lbs.) for target shooting from a bench, I think it's possible that you could control the trigger and get the best accuracy from the rifle. Both the first-stage length and second-stage weight are adjustable, but the weight cannot be adjusted below about 4 lbs.

Two10-shot rotary clips are included with the rifle. A large o-ring retains the pellets once they've been loaded. Since no plastic is used, they should last indefinitely. The clips fit into the receiver only one way, so you'll never have to worry about inserting them backwards. They project only a quarter-inch from the top of the receiver and won't interfere with a scope tube. The last pellet visible in the magazine is the next to be loaded, so you can monitor your remaining pellets without removing the clip. Most standard .177 pellets fit easily and feed reliably, with one exception. More on that later.

Scope it...or not
The HaleStorm includes a good set of fiber optic sights, which are often missing from PCP rifles in this price range. However, given the potential long-range accuracy of the rifle, most shooters will mount a scope. The scope rail accepts both Weaver and 11mm mounts. It also has slots, but they're not Picatinny . 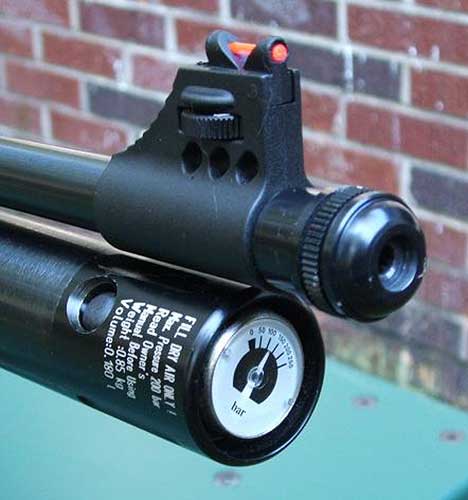 Front sight is adjustable for elevation. The removable reservoir has an integral pressure gauge and accepts a fill probe. No air is lost when the reservoir is detached from the gun.

Another uncommon feature is the removable reservoir. A manometer (pressure gauge) is in the end of the cylinder along with a port that accepts the fill probe. At 180cc, it's larger than most other competing PCP rifle reservoirs with the added advantage that a single fill provides about 50 shots. This is more than enough for a day of hunting. If you get a second reservoir, you'll have around 100 usable shots for a day of non-stop shooting. A degassing tool is included so you can empty the reservoir after you've removed it from the rifle.

Shooting the HaleStorm
To ready the HaleStorm for shooting, fill the air tank to 190 bar (approximately 2,755 psi), as recommended by the owner's manual. The pressure must be kept between 100 and 190 bar. When it falls below 100, accuracy quickly deteriorates. Load 10 pellets into the magazine. Place the tank back into the gun, and you're ready to go. Since this gun isn't shrouded, it's not quiet. It's somewhat louder than my old Crosman 2200 and a little loud for a backyard with close neighbors. For extended shooting in an enclosed space, hearing protection would be a good idea. 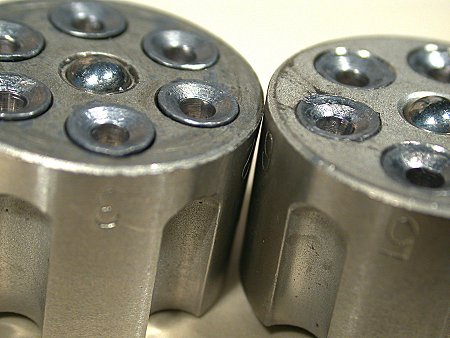 I tried a number of different pellets, but it quickly became apparent that pellets weighing at least 10 grains were necessary due to the power of this rifle. Anything much lighter will approach or exceed supersonic speeds, and accuracy will diminish. For example, I tried the Beeman Ram Jets that perform so well in my R1, but couldn't get groups better than an inch at 25 yards. RWS Superdomes--8.4 grains--exceeded 1,100 fps and grouped poorly.

10.2-grain JSB Exact Heavy pellets
The JSB Exact Heavy pellets performed well as far as velocity, but I had problems with inconsistent accuracy. It's an excellent pellet, just not in the HaleStorm. With a 190-bar fill, the velocity started at 967 fps, climbed smoothly to a maximum of 1,026 fps, and dropped to 935 at shot 50. I got a run of 24 shots that varied from just 997 to 1,026 fps. Over all 50 shots, the shot-to-shot variation averages just under 6 fps; that's excellent consistency for an unregulated gun. At the maximum, the gun is generating just under 24 ft-lbs of muzzle energy, which is pretty powerful for a .177. Few springers can generate this level of energy, even in .22 caliber. 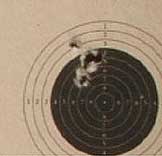 10.6-grain Beeman Kodiak (H&N Baracuda)
The Beeman Kodiak pellets performed well in the HaleStorm. Good 50-yard groups without flyers took some effort but were noticeably better than the JSBs. Starting velocity with a 190-bar fill was 946 fps; the maximum was 1,032, and shot 50 gave 927 fps. The shot-to-shot variation was low with this ammunition. A 31-shot string (from 7 to 37) smoothly varied from 991 fps to the maximum and then back to 990 fps. 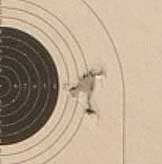 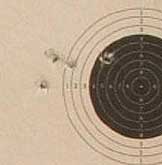 10-grain Gamo TS-10
The Gamo TS-10 pellets were a pleasant surprise. They don't appear to be made as well made as the other pellets. They tend to have flashing from the mould parting, but they had acceptable accuracy at 25 and 50 yards. I didn't run a full string for velocity testing, but they're within a few fps of the Kodiaks. 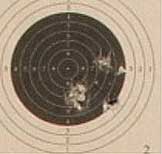 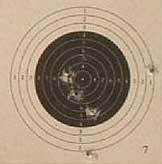 10.5-grain Crosman Premier Heavy
The Crosman Premier Heavy pellets are THE pellet for this rifle. Velocity was almost identical to the JSBs, and accuracy was excellent. Due to the velocity and the hard lead used by Crosman, it may be necessary to lightly lube these pellets, as they can lead a barrel when the speed exceeds 950 fps. With a 200-bar fill, the velocity started at 934 fps, topped out at 1,021 fps at shot 30 and fell to 903 fps at shot 60. The 58th shot still generated 942 fps. Accuracy was outstanding: 5-shot groups under .40 inches are possible at 25 yards, and 50-yard groups ran from about .50 inches to .60 inches. If you like to shoot only one pellet per gun, look no further. 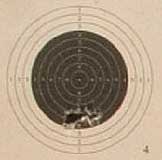 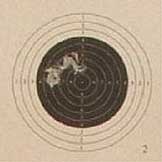 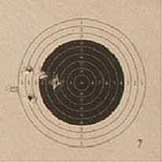 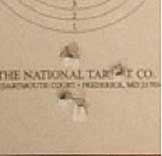 At 50 yards, the Crosman Premier Heavy pellets produced these .60-inch and .47-inch groups (two shots in the upper hole on RH target). 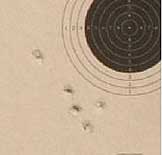 12.9-grain Skenco Big Boy
The Skenco Big Boy is a new pointed pellet. Their weight variation is fairly small and they seem to be well made. I'd hoped that they would be a compromise between the various 10-grain pellets and the much heavier Eun Jins. Starting at 190 bar, the velocity started at 868 fps, topped out at 942 fps and fell to 877 fps at shot 45. A 23-shot string (from 13 to 35) varied only 26 fps. Unfortunately, the HaleStorm didn't like them. At 25 yards, about the best I could do was an inch, but flyers were frequent. They'd be fine for plinking at shorter ranges but too inaccurate for shooting past 25 yards. Due to the shape, the Big Boy would sometimes protrude from the cylinder and hang up while operating the sidelever. Overall, I can't recommend them for the HaleStorm.

15.4-grain Eun Jin
Given the power of this rifle, I was very interested in testing the Eun Jin pellet. Rated at 16.1 grains, my tin averaged 15.4. Starting velocity at 190 bar was 801 fps (22.0 ft-lbs), maximum was 880 fps for 26.5 ft-lbs and shot 50 gave 808 fps (26.5 ft-lbs is an amazing muzzle energy for a .177 caliber gun!). The accuracy wasn't as good as the Crosman Premiers: 25-yard groups were generally around a half-inch, and 50-yard groups ran from just under an inch to an inch and a quarter. There were also occasional flyers. This pellet is made quite as well as the Crosman and JSB. 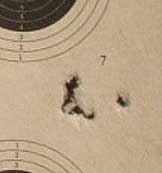 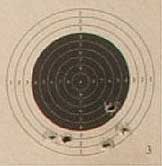 A flat shooter
Sighted in at 50 yards, the HaleStorm has a nice, flat trajectory with any of the 10-grain pellets. At 30 yards, the pellets hit about .70 inches over the aim point, and at 55 yards are only a half-inch low. Even at 75 yards, the drop is less than 4 inches. Due to their lower velocity, the Eun Jins are about 1.2 inches high at 30 yards, about .75 inches low at 55 and almost 6 inches low at 75 yards.

Wrapping it up
In firing over 1,200 rounds the last couple of months, I've been impressed by the HaleStorm. The build quality seems to be quite good and there were no operational problems at all. The metal and wood finish are excellent for this price range. Open sights and a removable reservoir are nice features not always included in competing rifles. Due to its tremendous power, it's a little picky with the ammunition it'll shoot well. But, with the right pellets, it's very accurate. Combined with a flat trajectory, hitting targets out to 75 yards is easy. I also appreciate the number of shots available from a fill. The HaleStorm does better than most PCPs in this regard. I have only couple quibbles. A lighter trigger would make accurate shooting easier. A lower power level might also help. This would probably make the rifle less sensitive to the pellet used and would provide an even greater number of shots per fill. If you're looking for a reasonably priced PCP rifle that's accurate, the HaleStorm should be on your short list.