Now that you know the types, mAH ratings, voltages and technology of airsoft rechargable batteries, it's time to discuss recharging. If a gun comes with a battery and a charger, the owner's manual gives instructions on how to recharge the battery. Pay close attention to those instructions, because the different types of batteries have very different charging requirements. 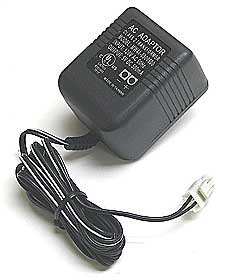 A standard charger usually comes with the gun. It charges at one rate only, and that's usually a low rate for safety.

Pay attention!
Battery chargers are built with several possible features that govern how they're to be used. Twenty years ago, most rechargeable batteries were NiCad and operated the same way. Owners didn't have to pay as much attention to how they charged them, but the times have changed. Now that the world has NiMH, Li-ion and even other exotic rechargeable battery technologies, it matters a lot how they're recharged. Failing to follow the directions can destroy the batteries and can even result in fires and explosions.

You can refer back to Part 1 of this report for specifics about which technologies charge slow or fast, but most people don't care. All they want to do is charge one battery. That can change suddenly, however, when they get a new gun or even buy a spare battery for the one gun they own. Each battery has an mAH rating and voltage printed on the outside, although some battery packs are encased in transparent plastic sheaths and are connected in a series. The information printed on the outside of one cell in a long string of cells pertains to the voltage of that cell, only. To get the total battery voltage, you have to add the voltage of all the cells in the series. If you have seven cells, each with a 1.2-volt rating, you have a combined 8.4 volts (7 x 1.2 = 8.4). These cells might have a 1,200-mAh rating or they might have a 2,300-mAh rating. Whatever rating one cell has will be the rating of the total battery it's part of.

The higher the mAh rating, the longer the battery takes to charge--all things being equal. With certain technologies, such as Lithium-Ion, the charging rate is so fast that the difference is a trifling bit of time. You'll probably never notice. With Nickel-metal hydride technology, however, the amperage capacity is extremely important, because that technology cannot accept a charge above a certain rate.

Know what you're doing!
It's dangerous to mix battery chargers with batteries unless you know they are compatible. You often don't have to do anything more than hook up your battery to the charger that came with it. The company selling the battery knows the top charging rate that battery is rated to accept, and they include a charger that doesn't exceed that rate. Sometimes, though, there can be other factors. To save money, the gun company may have only given you a minimal charger. Sometimes, it's possible to buy a faster battery charger. Other times, the battery you're trying to charge cannot accept a charge any faster than the charger that came with it. Most good instruction manuals will include this information, but not always. You may have to do your own research online to discover what charging rate a certain battery can take.

Danger!
Do you have a drawer or a box filled with spare battery chargers? Most people do, and that can get you into trouble just as fast as a well-meaning but unknowledgeable friend who says your charger is just a cheap one and will take forever to charge the battery. Sometimes, a low-rate charger is exactly what you need!

Improper charging destroys batteries
Battery retailers say that more batteries are damaged by improper charging than by any other cause. The faster the charge rate, the greater the risk to the battery; therefore, you need to be very certain about the charging solution. As clumsy as it may be to own many specialized chargers, it's also the safest way to proceed.

Universal chargers
If you know what you're doing, it's possible to buy chargers that can be set to charge at variable rates. These types are useful when you own a lot of different airsoft guns and perhaps some radio-controlled models that use different batteries. Simple universal chargers come with a variety of connection cables and switches for you to set the various voltages and charging rates. They also have a host of adaptors to fit various types of battery connections. More exotic chargers come with computer-controlled sensing devices that detect the battery's technology (called cell chemistry in the trade) and charge accordingly. 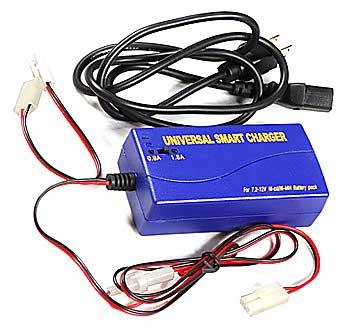 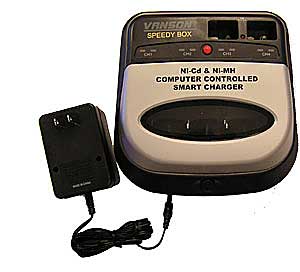 A smart charger is computer-controlled and charges the battery, although some fancier ones can balance cells and do other things that add life to batteries.

Temperature during charging
Usually, this shouldn't be a major concern, because you'll charge your batteries inside a building where the temperature will be between 10-40 degrees C (50-104 degrees F). If you charge in the garage in the winter in a cold climate, both NiCad and NiMH batteries will generate excess gas inside their cells --shortening their lives.

The charging rate is not elective and has nothing to do with how fast you want the battery to be ready. Overcharging a battery not built for a fast rate can destroy it.

Lithium chemistry batteries also have some special charging requirements. One is to guard against excess heat. This is such a concern that larger batteries come with fans built into their chargers. For prolonged life, Li-ion batteries should be stored at a cool temperature (below 80 degrees F), if possible.

Summary
Batteries have gone from simple to complex by the introduction of modern technology. Performance, however, has been enhanced many times and is worth the extra effort we must take to keep our batteries running. As never before, it's important that you understand the batteries you have and follow the instructions for their charging and maintenance. If you do, you'll be rewarded with a long service life and power when you need it.