By Tom Gaylord
exclusively for PyramydAir.com. © Copyright 2004 All Rights Reserved 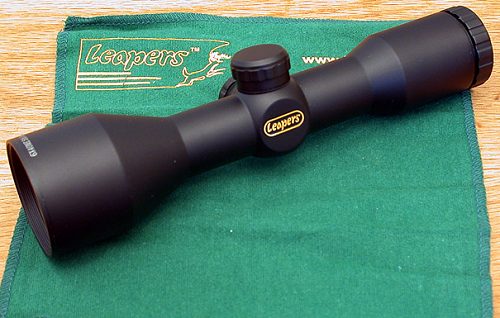 Leapers compact scope is a small, lightweight hunting scope with 6 power and a 40mm objective lens. Fifth-generation emerald-coated lenses throughout give it extra brightness.

At the range, I started at 25 yards and was on the paper target with the first shot. Because of the way this gun is designed, you can't boresight it without a collimator, so to skip that step, the closer you can get to your first target, the better. I mounted my paper targets on a 4-foot by 6-foot sheet of cardboard in case I didn't hit the target paper right away, but that proved unnecessary.

Before I describe how the rifle shoots, let me show you the three new bullets Pelletman makes for this rifle. They are all swaged from pure lead and they are some of the prettiest airgun projectiles you'll ever see. They're packed in custom Styrofoam trays, 50 bullets to a box. Don't even think of not using these bullets because I believe they are partly responsible for the great accuracy the rifle delivers.

From left to right the standing bullets are 225-, 250- and 275-grains, respectively. Each has a hollow cup in the base, like the bullet lying down on the left. Made by Pelletman and sold exclusively by Pyramyd Air.


The bullets are all shaped the same and come in 225, 250 and 275-grain weights. The principal difference other than weight, therefore, is length. Each bullet is finished mirror-smooth, which is a characteristic of swaged lead. There are no sprue marks anywhere on the bullets and they look like they will shoot quite well, which they do.

One problem with solid bullets in an airgun is getting them into the breech. Airgunners who have tried to load smallbore caliber solid "pellets," which are actually bullets by another name, know how hard they are to stuff into the barrel. That's because the bullet is being engraved by the rifling as it enters the bore. Think of a muzzleloading rifle and you have an airgun being loaded with solid bullets, only in reverse. With a muzzleloader, you use a short starter, which is a wooden dowel that can be struck with a hammer to ease the bullet into the rifling. In a breechloading airgun there is no short starter, so you are trying to start the bullet with your thumb as a substitute. You will only load a few solid pellets this way before you give up with a sore thumb.

Shin Sung has done the proper thing and counterbored their breech, so the Pelletman bullets are easy as pie to insert. Even the longest 275-grain bullet goes in with ease. And there is plenty of room in the loading trough for the longest of the three conical bullets. I found the 225-grain bullet to be the best performer on target. It grouped the best, which I believe is due to its short length that stabilizes better at the velocities the Dragon achieves. The 250-grainer was almost as accurate as the 225, but in my tests, the 275-grain bullet lagged behind the other two.

The Dragon operates from a 3,000 psi fill of air. You fill it from a scuba tank or a hand pump, though I caution you that because of the enormous amount of air this rifle uses, you won't want to pump it. There are a great many shots available, but I limited the total to five, with were in pretty tight range of one another. I see no reason why 12 or even 15 shots are not possible, though the first five will give the best accuracy at ranges beyond 25 yards. I topped off after each five shots for best performance.

I started shooting at 25 yards and moved back to 50 when the zero was established. The Leaper's scope was a perfect compliment to the rifle's intended hunting use and it was on paper with the first shot, which means the scope rail is aligned with the bore.

Accuracy was okay, until I stopped resting the rifle on the lower reservoir tube and rested it on the forearm instead. Then it went from okay to superb! Take a look at those groups!


At 50 yards there is some drop to the bullet, but you compensate by sighting in at 40 yards, then you're on from the muzzle out to perhaps 75 yards. A rifle like this has a limited range, after all. Within that range, though, it puts those bullets right where you tell it to, as long as you do your part.

The power of the rifle I tested was a tight band from 185 to 192 foot-pounds, with the heaviest bullets getting the higher power, as you would expect. I tested a brand-new rifle and it has been my experience that after many shots the firing mechanism will wear smoother and the power will increase a bit.

Velocity of the 225-grain Pelletman bullets ranged between a high of 613 f.p.s. and a low of 581 f.p.s. for five shots on a fresh 3,000 psi fill. The average for a five-shot string was 601 f.p.s., but the average for the first three shots was a healthy 609 f.p.s. That velocity gives an energy of 185.34 foot-pounds of energy. The start screen of the chronograph was set five feet from the muzzle and the day was 72 degrees F, with a humidity of 80 percent.

On paper the 250-grain bullet looks slightly better than the 225, but I'm staying with my pick because of what I saw on targets.

There are other models in the Dragon's general price range and they deliver similar power, so there is a choice of big bore rifles from which the shooter may choose. Of the Korean airguns, the Dragon is possibly the most accurate and it has the most contemporary lines. It's also the largest caliber, which may be a plus for hunters. It's a fine big bore that's worth the attention of serious airgunners.