The first thing that I noticed about the Gamo Varmint Hunter is just how similar it is to many other Gamo rifles. It's a reliable, efficient powerplant...and it delivers. How they get 1000 fps out of something that's so easy to cock is beyond me.

Solid construction
The Varmint Hunter is virtually identical to the Big Cat - composite stock, 4x32 scope and a polymer-encased steel barrel. There were only a few cosmetic differences that I found. One was the riser for the scope and the other was a different end cap for the back of the compression chamber. It may be that Gamo changed some cosmetics on their newer rifles, as I've seen the same end cap on the Whisper rifle.>

Gamo Varmint Hunter has a raised cheekpiece on each side.

The stock is great and the rifle's fit and finish are, too, but I'm not sure about the fluted bull barrel. I like more steel and less polymer, but I bet it would add a good bit of weight. One of the nice things is that the gun is very light and easy to carry for long periods of time. It seems sturdy and well-made.

Not an ordinary combo!
The Varmint Hunter comes with a 4x32 scope, flashlight and laser. The light is very bright and the laser, which is fully adjustable, can be seen over 200 yards away in the dark. After sighting-in, I tested the flashlight and laser by shooting an orange out of a tree at night. They work like a champ and made short work of my predatory citrus! 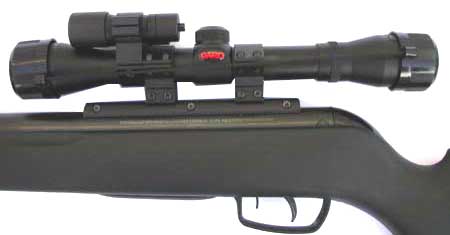 4x32 scope with laser and flashlight

The scope comes with a mount that includes a stop pin to secure it to the 11mm riser mounted on the receiver. It focuses down to 15 yards or so. It has a duplex reticle, although I'd prefer a mil-dot because this gun can take game out to 40 or 50 yards. An adjustable objective would also be nice, although I'm sure a scope with all those upgrades would make this a pricier gun!

Laser and flashlight sit atop the 4x32 scope and have convenient remote switches. They attach to the scope with rings, which you can also mount on any other scope with the same size tube. 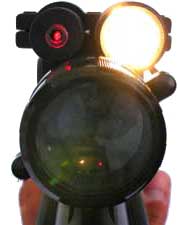 I'd hate to be a squirrel looking down this flashlight and laser beam!

The rest of the features are 100% Gamo. The trigger leaves a lot to be desired. The Varmint Hunter has the potential to be an excellent shooter, but it'll take a trigger replacement to get it there. My test rifle's trigger was hard to pull. However, when I did manage to keep everything steady, the Gamo Varmint Hunter was VERY accurate. 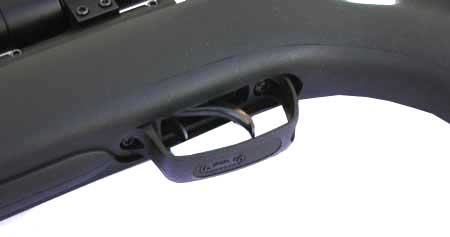 Loading and firing the .177 rifle is just like any other breakbarrel rifle with one significant difference. Most 1000-fps guns require significant cocking effort. This one needs only 28 lbs. of force. The safety is manual, which is a plus in my book.

Gamo's velocity figures are pretty accurate!
After a thorough inspection and a good barrel cleaning, I went to the bench to see what the Varmint Hunter could do. Gamo's published velocity is 1000 fps with lead pellets and 1200 fps with PBA ammo. I got close to 1000 fps using RWS Hobby pellets. With Beeman Laser pellets (6.5 grains), it delivered over 1000 fps but wasn't accurate. The Gamo Raptor PBA (5 grains) pellet shot at about 1150 fps and was inaccurate, as expected. Other pellets included various flavors of Crosman Premiers, RWS Super-H-Points, JSBs and various Beeman pellets. The best pellet I tried was the Beeman Kodiak Extra Heavy, with Crosman Premier Heavies shooting nearly identical groups.

Just because you can shoot at 1000, 1200, 1500 and even 1600 fps does not mean that you should. The best pellets in the Varmint Hunter were extra heavy ones. The velocities averaged 736 fps, but they held their groups out to 25 yards in the wind when the lighter pellets were shooting 2", 3" and 4" groups. Rather than velocity, convert the velocity and pellet weight to foot-pounds of energy. Using the 10.6-grain Crosman Premier Heavies, the Varmint Hunter produced 12.75 ft-lbs at the muzzle and 10.38 ft-lbs at a 25-yard target.

But, is it accurate?
I really had to work at it to wring out some accuracy from the Varmint Hunter. Because it's light, it's affected more by recoil. That means the stability of your hold and follow-through are put to the test, because you can't stop the gun from moving so you have to provide the most stable platform possible.

The point of impact between different weight pellets was significant. Some pellets hit a full 4" away from the center. Finding the right hold was another problem. My old favorite predator shooting rest was not an option. I took a cue from Tom Gaylord and tried setting the rifle on the back of my left hand. That did the trick! It took a while to get the hang of the Gamo trigger, but I finally did and got some tight groups. If you're planning to do a significant amount of hunting with this rifle, consider replacing the trigger with the GRT III trigger.

To simulate hunting, I mounted a Gamo squirrel field target in a pine tree to see if I could reliably hit the kill zone. To my disappointment, I found this difficult outside of 30 yards. Anything within 25 yards was 95%; but, once I got past 30 yards, I had some real problems. This is not to say that it won't hit beyond that. It's just going to take a lot of practice. The bigger issue goes back to the scope. I had to manually adjust the Varmint Hunter every time I significantly changed my distance, something that will be an absolute given in the field. Once I adjusted the scope for the appropriate distance and did not have to use the hold-over method, the rifle really performed. 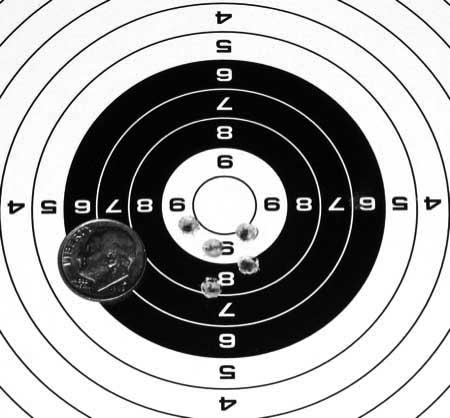 The bottom line: I like it!
I think this is a great rifle. I know that I was hard on it from certain perspectives, but I really like it even with all its shortcomings. The laser and light should easily transfer to just about any scope. So, if you want to upgrade the scope, make sure you use one with the same tube size as 4x32 already on the gun so you can transfer the laser and flashlight rings. It's really hard to go wrong with a Gamo rifle.