by Tom Gaylord
exclusively for PyramydAir.com. © Copyright 2006 All Rights Reserved

At the end of this article, there's a short video that shows the fast-action fun you'll have with the Walther CP99 Compact. Not only will you see what the blowback action looks like, you'll get to see the pistol used rapid-fire on a Shoot-N-C target.

Sometimes, you get an air gun just for fun! While there are a great number of highly accurate guns that will tickle the fancy of any rifleman or pistol shooter, accuracy alone isn't always enough. There are powerful airguns that are ideally suited to hunt small game, but not everyone is a hunter. Every now and then, all you want is to smile when you shoot, and fast-action BB guns such as the Walther CP99 Compact are designed for that! 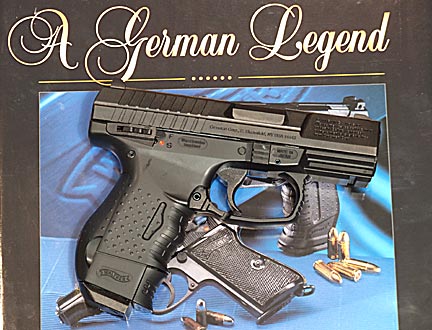 It's a handful, make no mistake about it! Walther's CP99 Compact BB gun with real blowback action is designed to make any handgunner smile.

This is yet another of those realistic air guns made by Umarex, the parent company of Carl Walther. While most of the pistols they make are 8-shot pellet pistols, they look like semiautomatics. They're actually revolvers. Your trigger finger has to advance the cylinder for every shot, and that makes the trigger-pull long and heavy. The CP99 Compact, on the other hand, is a true semiauto BB gun and has a slide that blows back with every shot, automatically re-cocking the pistol. So, every trigger-pull is short and light. You can pull it up to 17 times to send a BB on its way at more than 300 f.p.s.!

The 9mm Walther P99 Compact firearm is a smaller version of their popular P99 service pistol, used by Law Enforcement agencies around the world. In fact, in his previous movie, film icon James Bond was upgraded to the P99 from his former sidearm, so you're in good...and famous...company when you carry one. The P99 Compact is often selected as a backup or a concealed carry weapon because of its smaller size.

No doubt, the No. 1 reason shooters will love this air pistol is the blowback action. Every time the gun fires, the slide is blown back, re-cocking the gun for the next shot. In a firearm, this function also loads the next cartridge into the chamber, but BB guns don't work that way. The impulse of the heavy metal slide coming back imparts the feeling of recoil. Until you try one, it's difficult to comprehend how good it feels. Watching the video demonstrates it fairly well. Each light pull of the trigger fires the pistol, and your finger cannot work faster than the gun, so the rate of fire is entirely up to you!

The trigger lets off at 5 lbs. If you're shooting fast, you'll never notice. Only a slow trigger-pull reveals the weight and a bit of creep in stage two. The first stage is actually long. Again, if you're shooting fast, you'll never notice. If you keep your finger on the trigger all the time, most of the first stage will not come back, leaving you with a quick second stage that seems to break crisply. It's all in how you shoot.

If you haven't yet experienced the realism of an Umarex airgun, there's a big treat in store when you hold your first one. If you're already familiar with them, all I need to tell you is that the CP99 Compact looks as good as any of them! It weighs 29.5 oz. - or about 10 oz. heavier than the prototype firearm. The feel in your hand is a solid one, very realistic, indeed. Fit is equal to all Umarex guns, but finish is beyond them because a tactical matte finish was selected. Blued or nickelplated guns often have dull spots in the finish, but the matte black on the Compact is even all over.

The sights are non-adjustable - just like one version of the P99 Compact. On two other versions of the firearm, you can drift the rear sight in both directions with a punch; once regulated, the shooter never touches the sights again. The CP99 Compact shoots to the point of aim at 10-20 feet, so there is nothing to do but enjoy it.

The safety is on the right side at the rear of the slide. It's a little strange, in that you first pull back to unlock it, then push down for safe. It automatically uncocks the gun when it's put on. Every time you release it, you have to re-cock. 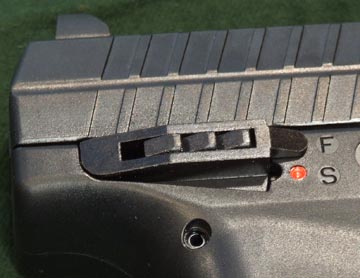 The safety is first unlocked by pressing back on the switch, then moved to the desired position. It uncocks the gun when put on.

This BB pistol operates entirely on the power of compressed gas - CO2, in this case. A standard 12-gram cartridge is installed through the back of the grip. It launches the BB and powers the blowback action. You might think that would limit the shots you get, but Umarex has found a way to conserve on the gas used. You'll get about 100 usable shots before it's time for a new cartridge. In fact, if you just want to dry-fire the pistol without shooting BBs, simply remove the magazine and the blowback still works! I find shooting it that way is almost as enjoyable as shooting with BBs. Don't forget to put one drop of Crosman Pellgunoil on the tip of each new cartridge to keep the gun operating a long time. 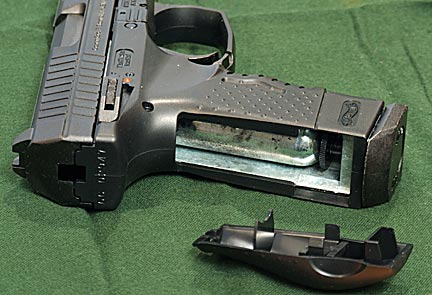 The Walther CP99 uses a stick magazine. It fits in the bottom front of the grip and feeds the BBs straight up until they are grabbed by a magnet prior to being shot. Loading is easy, if a bit tedious because the magazine holds so many. The spring-loaded follower is locked down, and BBs are dropped one at a time (the tedious part) through an opening in the lower rear of the magazine. The photo shows it best, and I just set the magazine on an angle so all new BBs roll down and out of the way. It's actually possible to load as many as 19 BBs if you want to, so I believe the recommended number of 17 is to reduce the tension on the magazine spring. 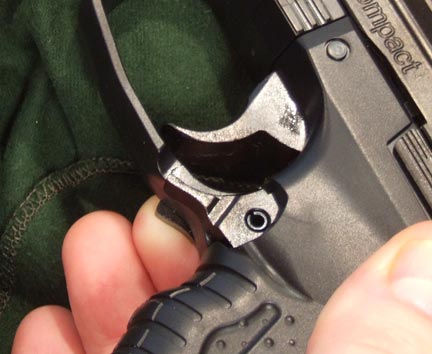 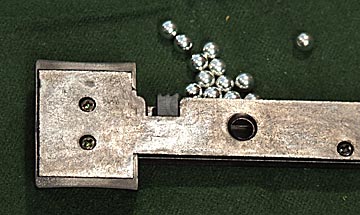 Drop each BB through the hole in the rear of the magazine.

Spare BB magazines are available and they make a lot of sense for this gun because the gas cartridge lasts so long. When you run dry, simply flick the ambidextrous magazine release on the lower rear of the triggerguard and the magazine drops out freely. Having several spare loaded mags makes sense if you want to keep the fun going.

This is a fast-action BB pistol - not a 10-meter target pistol, so you'll want to choose your targets accordingly. Daisy ShatterBlast targets are a lot of fun if you have a yard to place them in; for indoors, you'll want Crosman's 850 pellet and BB trap. It's the only BB trap that holds the BBs inside, so they don't get loose and bounce around the floor. When your gun is charged up and fully loaded, just pull the slide back once and let it go. Then start shooting.

For the absolute maximum fun you can have, get some Shoot-N-C targets! When the BB passes through the target, the bullseye changes color from black to bright green. I can tell you about it, but seeing it is more dramatic, so I've shot some video to show you what's possible. Remember, this is not a precision target handgun; it's a realistic copy of a top defense handgun. Be realistic when you set up the target. I like 10 to 15 feet when the target is a 3" bull. I don't even have to aim when I'm that close. If the first round is on target it's easy to put them all through.

A lot of air gun for the money!


For the price, the CP99 Compact is one heck of an airgun. Be sure to get lots of BBs, CO2 cartridges and targets when you get your gun, because you're going to go through them fast!