Since you sight a gun with your eyes, let’s talk about them.

Binocular vision – a blessing and a curse!
Binocular vision (both eyes looking at the same thing with some separation between them) gives humans their ability to judge distance. We can train this talent and actually improve it a lot, but it’s the skill that allows us to operate cars and catch a thrown ball.

When we shoot, though, having two eyes can be difficult. Most untrained shooters, and more than a few who should know better, instinctively close one eye to sight their gun. It seems like the thing to do, until you receive advanced marksmanship training. Then, you’ll be taught to keep both eyes open when you shoot.

I wrote today’s posting because I read a report of a pistol shooter who was getting lousy groups because he couldn’t remember which eye to close. The answer is – neither! Learn to trust your dominant eye and leave both eyes open if you can. When the person I read about figured that out, his groups shrank to one-fifth their original size.

Closing one eye while sighting uses voluntary muscles (to close your eyelid), which will tire you during a long shooting session. That’s one reason target shooters are trained to keep both eyes open.

I received a recent comment asking if I was going to post any tips about accurate handgun shooting. Well, here it comes! 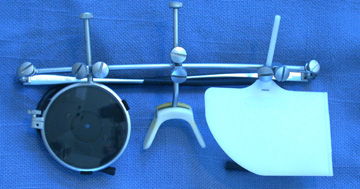 You should keep both eyes open even when using a scope for the same reason. More light strengthens the sighting eye. Only with the other eye open to see, it does get confusing! It’s something I still have to think about after many decades of shooting, so the strangeness probably never goes away completely

Even if you continue to close one eye, you’ll still be able to hit the target. But the technique of keeping both eyes open is valid. Try it and see if it helps your score.