Don’t understand parallax? This should help!

Is parallax real?
Parallax. What the heck is it, and why should you care? Many of the better airgun scopes have parallax adjustments, but nobody explains what parallax is or why it’s so important. Is it real, or just something made up to sell costlier scopes?

Parallax is real and can cause you to miss!
I have tried many times to explain parallax, but the message never gets through. People who understand me already know about it, but those who don’t understand continue to miss out on a lot of potential accuracy.

Simply put, parallax is an optical phenomenon that can make you miss your target, even when your sights are exactly aligned! Don’t believe me? How about this? You know that things under water are not where they appear to be, right? A bowfisherman has to shoot in a different place than where the fish appears to be because the water refracts or bends the light. Parallax is not exactly the same, but it acts in a similar way.

How to see parallax
Rest your rifle so it is steady without you holding it. Now, look through the scope at a target. With the scope reticle resting on a small target, move your head up and down and from side to side and watch the reticle move in relation to the target. If the scope’s parallax knob has been adjusted correctly, the reticle movement will be very little, but you should be able to see some movement at all times. That movement is parallax, and it demonstrates how important your eye placement is relative to the scope. If your eye moves, you will aim for the target in the wrong place – like the fish under water.

The U.S. Army trains its riflemen to cancel parallax
Rifle marksmanship is a skill the Army has always needed. In the Civil War, the Union Army discovered that its soldiers had never received even the basic marksmanship training they needed to shoot a rifle in the field, so they had to quickly correct this deficiency. After the war, the National Rifle Association was created to promote rifle marksmanship in the U.S., but the Army didn’t stop there.

They developed a manual of basic rifle marksmanship that breaks down the principles into steps that can be learned easily. One of the most important principles is how to sight a rifle. Soldiers had to be taught to always place their heads at the same spot on the stock, so the sights would always appear the same to their eye (parallax). The Army calls this head placement a spot-weld, meaning that once you find your spot, you have to be able to return to it every time you hold the rifle, as though your head is spot-welded to the stock.

How important is parallax?
Just last week, I was shooting groups at 50 yards with a .22 rimfire. The rifle’s stock has a low comb that makes cheek placement difficult, so for the first 100 shots I was unable to group any smaller than 5 shots in 2 inches! This was a target rifle with a bull barrel, and it should have been capable of half-inch groups at that distance. Then, I noticed a small amount of parallax through the scope, which instantly told me what was happening.

Because the rifle was a semiauto, I was able to place my head on the stock and hold it in the same place for all 5 shots. Once I did that, the groups shrank to less than an inch, with the best one being smaller than a half-inch. THAT is what parallax can do to you! 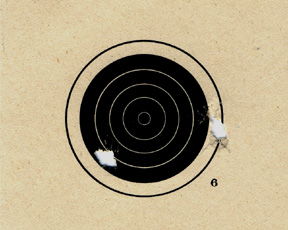 Three tight shots on the right; two tight shots
on the left. A five-shot group measuring almost two inches
center-to-center, but every shot was made with the identical sight picture.
The culprit? Parallax – caused when the shooting eye moved between shots.

Here is a common symptom of a parallax problem that shooters often blame on “scope shift.” They shoot three pellets into a tight cluster at 30 yards, then the next two go into another tight cluster an inch away. Parallax causes this, but they want to blame the scope. If the scope has a parallax adjustment, they can’t believe that it still has enough parallax to move their shots around.

Parallax is one of the greatest contributors to inaccuracy with any kind of gun. It confounds most scope users because they can see the sight picture so clearly – yet the picture is really moving as they reposition their head for each shot.