Let’s get right to it.

You will see your sights suddenly jump off the target just as the shot is fired! If you are shooting right-handed, they will jump to the left; if left-handed, vice-versa. Seeing this will make you concentrate on relaxing to the point that the sights no longer jump.

You will see the shot taken with the sights not properly aligned. Non-shooters have a fantasy that sights remain steady on a target the way they are shown in movies. Shooters know they don’t. The sights almost never stop moving, and follow-through forces you to watch in horror as the gun fires at the least opportune moment.

You may see yourself start dismounting the gun before the shot is fired! This is a REAL shock the first time you see it. I have run pistol ranges where the shooters were kicking up dust six feet in front of themselves while shooting at a chest-high bullseye 25 yards away. This happened during rapid-fire exercises, and the bullets weren’t lying. Those shooters really were pointing their pistols at the ground shot after shot, all the while thinking they were aiming at a distant bullseye! What they really did was dip the muzzle of the pistol the moment before they jerked off the shot. It is so unbelievable that you often have to see another person do it before you can believe that you do it yourself.

Follow-through forces you to evaluate each shot, and your own self-esteem takes it from there. Either that or you get out of the shooting sports altogether.

Tip 4. Measure your groups
I was once surprised when a shooter told me he had just shot a half-inch group from 100 yards. I was looking at his target and though I didn’t have a ruler, I could clearly see his group was larger than two inches! That’s because, after many years of shooting and measuring groups, I’ve developed a sense of scale.

Here is how to measure a group. Measure across the widest dimension of the two shots farthest apart. If there is any doubt about which ones are farthest apart, measure all of them. If you shoot anything but wadcutter pellets, don’t forget to include the torn margin around the bullet hole that is also where the bullet passed through the paper. You can measure this with a ruler, but a dial caliper is much easier to use. 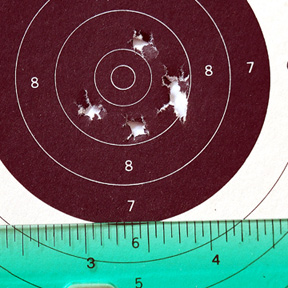 You can measure with a ruler. I’ve placed the ruler below the bull so you can see the markings on it, but you should place it across the widest spot in the group. 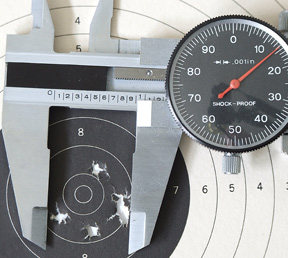 After measuring across the group, subtract one pellet diameter from the measurement. That eliminates half a pellet from each side of the group – resulting in a center-to-center measurement!

What you learn from measuring is how large a half-inch group can be and how small a one-inch group really is. With practice, you’ll be able to estimate sizes more easily.