Celebrity BB guns
In 1932, Daisy signed circus performer Buzz Barton to put his name on a special BB gun. The first gun appears to have been either a rush job or one that was half-baked. It had a PAPER label on the left side of the stock that proclaimed it as a Buzz Barton Special No. 195. The metal was blue and the stock was walnut. Daisy had come close to excellence in many ways, but that first gun missed the mark of being a classic. The paper label was quite fragile, as you might expect, so today a good one (the label, not the gun) commands a high price.

A shining star
A year later, Daisy got it exactly right. The second Buzz Barton was quite different from all other Daisys of the time. It was the first to feature a branded stock – Buzz Barton was burned into the left side of the butt inside a star frame. They used both light maple and dark mahogany wood for this stock, and the visual impact is both dramatic and gorgeous! That’s why a perfect No. 103 Model 33 Buzz Barton Special commands almost $600 today. Even a well-worn original brings $200 to $250! Beware of refinished guns, though. They’re worth far less than the real deal!

This all-original Buzz Barton Special has about 50 percent of its finish. The sights are complete, as well. 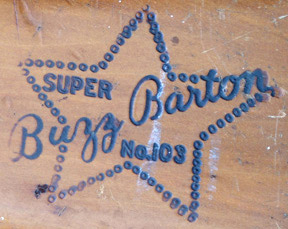 Tubular sight
The metal was nickelplated except for the unique rear tubular sight, which was blued. Working together with the front tubular sight, it was great! The inside of the rear sight was a small aperture, while the front globe housed a conventional bead. Acquiring a target with this sight is fast and easy – exactly what a shooter wants. Daisy received such a warm reception for the sights that it appeared on a number of their special BB guns for years after.

Rites of passage
The Buzz Barton had much of the early 20th century about it. The lever was cast iron and worked in the old-style short cocking stroke that made men out of small boys. It was harder to cock, but that was part of the passage to manhood! The shot tube was filled through a small hole behind the front sight. You learned how to manage the loading operation quickly or lost more than half your BBs as they missed the opening. The cover of the shot loading hole usually rotated past the right place, so a shooter had to keep one eye on the loading hole all the time, or BBs would come pouring out of the gun! 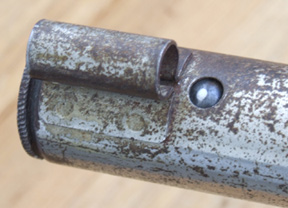 The loading port was small and didn’t stay shut. Little boys and girls learned dexterity and responsibility by loading and operating a Buzz Barton BB gun.

They couldn’t leave it alone!
Later Buzz Bartons reverted back to the No. 195 models 33 and 36. That model was based on a Markham BB gun, because Daisy also owned the Markham company. They made cheaper guns under that name for trade accounts like Sears & Roebuck. Though the stock was still branded, these Buzz Bartons are ho-hum compared to the No. 103.

Daisy went on to market the Buck Jones, a “trombone-action” pump gun that has the ONLY compass and sundial they EVER put on a vintage BB gun. It was another fine classic. After that, they made the gorgeous Golden Eagle, a copperplated gun with a black painted stock that is strikingly beautiful. But that Buzz Barton Special from 1933 was the high-water mark of the 20th century American BB guns.