Home > Blog > Education / Training > Where (and how) to locate a scope

This post was requested by MCA, who has noticed some movement in his shot groups depending on where he places his face on the stock of his air rifle. This is a problem older than scope sights and was first addressed in early Army rifle marksmanship manuals of the 1870s.

The spot-weld
During World War II, marksmanship instructors taught soldiers about the “spot-weld.” The term was used to embed the notion that there is only one place on the stock for the head to be. [I recently saw this term called both a “stock weld” and a “cheek weld” on the Internet, but they mean the same thing.] That is important because of the relationship between the sighting eye and the sights. Parallax is the phenomenon that describes the apparent movement of near and far reference points due to different sighting angles. Big words for a simple concept.

Parallax
Hold up one finger at arm’s length and align it with a distant mark. Then close each eye separately and see if the finger moves in relation to the mark. It should appear to move when your non-master eye is open but your master eye is closed. Because your eyes are separated, they each see things from a different angle. That’s what enables you to judge distances, and it also demonstrates the concept of parallax.

The eye must remain in place!
If you move your sighting eye relative to the reticle of your scope, the reticle MAY appear to move on the target. I emphasize MAY because if there is zero parallax at the targeted range, there SHOULD be no movement. So, if you place your head on the stock differently each time you shoot, the reticle will be aimed at a slightly different point. That will affect your impact point. If you keep your head still for five shots but in a different place than when you sighted in, you will get a tighter group that has shifted from the initial aim point. If you move your head for each shot, your group will be much larger than it should be.

The solution is to find the best spot on the stock for your head to rest in order to see clearly through the scope, and ALWAYS place your head at that spot! That spot, which must NEVER change, is called your SPOT-WELD! Got it?

Whether your scope has parallax adjustments or not makes no difference if your head is always in the same spot. That cancels any parallax error.

Natural hold
Locate the natural hold by adjusting how you hold the gun until it feels natural. If you cannot see through the scope in that position, you need to move the scope until you can. That can mean relocating the scope at best, or new scope mounts (and sometimes a new scope to go with them) at the worst.

Once your hold feels natural and you can see through the scope, LEARN that hold and practice it until it becomes a habit! This is the reason that a one-gun shooter is often more accurate than someone who owns many guns. In the Army, they used to put masking tape on the stock so the soldier would remember where his cheek was supposed to go. Another technique was to grasp the wrist of the stock in a certain way, so your cheek was always pressed against the side of your hand.

However you do it, locating your shooting eye at the same point every time is a serious accuracy tip.

How a spring-piston airgun works 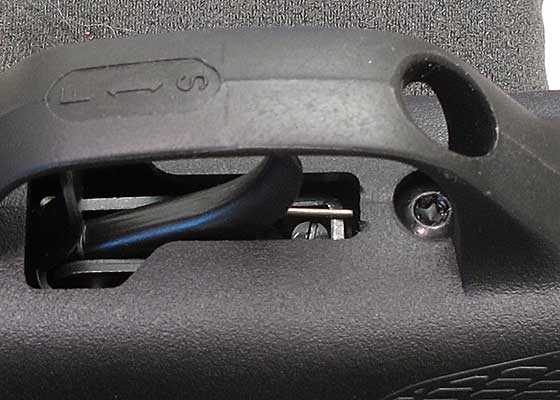