Sights
The sights are a ramp-type square post in front and a wide square notch in the rear. The rear sight adjusts laterally for windage by means of a single jam screw. Loosen it and slide the sight in the direction you want to move the pellet. The manual says the front sight is set up for shooting at 10 meters, and that’s exactly what I saw. A 6 o’clock hold on a standard 10-meter pistol target at 25 feet netted me a score of 45, for five nines clustered around the center. 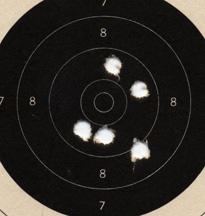 All five shots from 25 feet landed in the nine ring. I used Gamo Match pellets.

Safety
The safety is ambidextrous and allows the full functioning of the trigger and hammer when applied. I wondered at the wisdom of that before realizing that it’s the perfect dry-fire feature. You can shoot the gun in safety, knowing that gas cannot be released with the safety on. Of course the 8-shot clip should be removed from the gun for complete safety. The trigger feels the same whether the safety is on or off.

Be careful how you grip the pistol!
During chronographing, I sometimes found myself gripping the moving slide as the pistol fired. This lowered the velocity anywhere from 50 to 100 f.p.s. If you decide to shoot with two hands, make sure neither one rubs against the slide, which you can see in yesterday’s report, Desert Eagle, First impressions, part 2. You can’t feel the slide move beneath your fingers, so don’t go by the feel. Look to see that you clearly are not touching the slide! 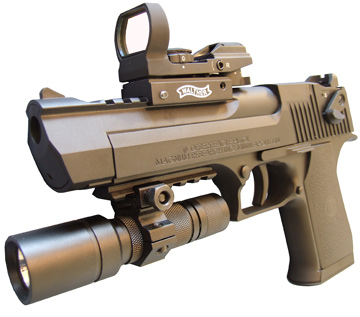 Mounting rails on top and beneath let you dress the Desert Eagle like a tactical powerhouse.

I think my reports have addressed all your questions. If not, ask away!