Thanks for being patient. Today, I’ll show the other common types of spring gun disassemblies. Few other airguns have the screw-in end cap like Weihrauch (except for many Beeman R-series guns, of course); but, in the 1950s, Anschütz made a military model called the Hakim and a civilian version of the same gun and both had a screw-in end cap.

Stock disassembly
When disassembling the action from the stock, you’ll find both triggerguard screws don’t attach to the action on some rifles. Usually, the rear screw is just a wood screw. When you find this, just leave it in place. Some modern guns, such as the Gamo CF-X, have only a single stock screw in the triggerguard area. Because the stock is a one-piece molded affair, the triggerguard doesn’t have to be held on, and this is obviously just the rear action screw.

Study the action
Something has to hold the powerful mainspring in place. If you study the action long enough, it becomes clear what that is. There are two very common methods of holding a spring gun powerplant assembly inside the mainspring tube – the vertical bolt and the crosspin.

Vertical bolt
This type is found on the FWB 124, the TX 200 and others. A large bolt comes up from the bottom of the mainspring tube and holds either the trigger housing or a sheetmetal sleeve that restrains the mainspring. Some guns, such as the 124, come apart in pieces, and you have to catch several small parts and springs as the assembly backs out of the mainspring tube. Others, such as the TX200, are modular. The TX trigger unit is held in place by the same two pins I showed you in the R1. The end cap is held in by the bolt. 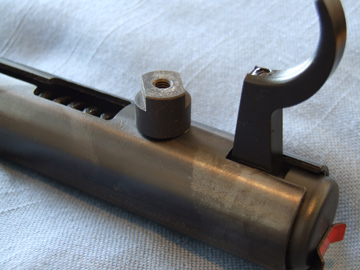 A large vertical bolt holds the FWB 124 together
Before you start to remove the vertical bolt, try to relieve the tension the mainspring is putting on it. There’s usually something in the end of the mainspring tube that can be pushed by your mainspring compressor to do this. This is where you’ll need to make various pusher blocks to augment your compressor. If you look at the R1 disassembly, you’ll see I put folded cardboard inside the headstock cup to push on the end cap.

Crosspins
The other mainspring restraining method is with crosspins, and two is the normal number. Diana has long been using two crosspins on their rifles. The older models had trigger assemblies that were not constrained by anything more than the mainspring tube. When disassembling these guns, watch for trigger parts that try to fly everywhere. Reassembly of these guns is an art that must be learned and practiced often. Newer guns have unitized trigger assemblies that contain all the little parts. These guns are much easier to work on, except for the automatic safety bar that has to be fiddled in between the two crosspins. 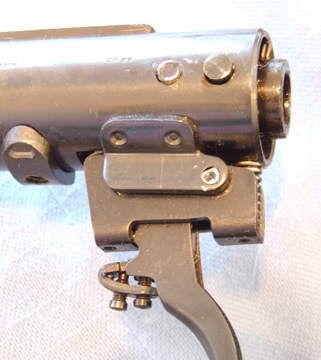 This vintage Diana 27 has two pins at the very rear of the spring tube. Modern pins are farther forward than this.
Often, one crosspin will have all the tension on it, and the other is just a backup. Dianas are like that. In older Webley guns, one crosspin is held by a grub screw that is hard to locate. If pins don’t drift out easily, look for things like this.