Today, I’ll discuss sidelevers, underlevers and anti-beartrap mechanisms. All these things are additions to what is basically the same mechanism we looked at in the breakbarrel Beeman R1. In fact, there are some Walther target rifles that are breakbarrels with the same type of anti-beartrap mechanisms as the underlever HW77. So, what you already know about spring powerplant disassembly still applies.

Sidelevers
Both sidelevers and underlevers usually employ a sliding compression chamber that moves the piston into the cocked position. The exception is any gun with a different type of breech, like BSA’s rotary breech (the Gamo CF-X has one), all taploaders and guns that use a flip-up transfer port to gain access to the breech, like the Diana 46 and the Webley Eclipse.

When a gun has a sliding compression chamber, disconnect the cocking mechanism from the sliding chamber and remove it from the gun. In some cases, certain underlevers are held on by rivets, so just take off the connecting link.

You can now install the receiver in your compressor, put some tension on the end cap and remove the two crosspins we discussed yesterday. Back off the tension on the compressor and the trigger block will be pushed out of the gun, followed by the mainspring. The piston can be removed now, too.

The sliding chamber can now be slid to access the Allen screw that holds the cocking link. Then, the chamber will come out of the tube as well. Other sidelevers are just variations of this theme.

Underlevers
Think of an underlever as a sidelever turned 90 degrees, because that’s all it is. Look at the TX200.

The TX200 cocking link looks similar to the R1 link. This link is connected to the sliding compression chamber that houses the piston. It must slide back to cock the gun, then forward to act as a compression chamber when the piston springs forward. Notice the large vertical bolt (extreme right) that holds the TX powerplant together. 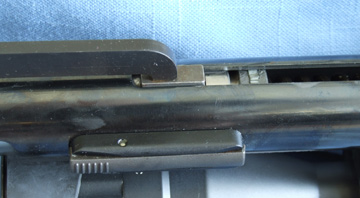 The big bolt in front of the HW97 trigger doesn’t hold the mainspring. It’s a bushing for the stock screw and holds down the anti-beartrap mechanism (small spring).

The HW97 anti-beartrap mechanism is disassembled.
That’s the end of powerplant disassembly. Next, I’ll show you how to tune a gun. The mainspring compressor will be shown in greater detail in that segment.