This subject is quite fascinating, and when you research it, you learn about airguns that most people have never seen. Now, there’s a book about these guns, and it’s pretty thorough! 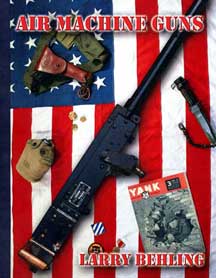 Most people who read this blog know about the Russian Drozd. It looks like a submachine gun; but, because it operates on CO2, it can fire only full-auto in the burst mode (either three or six shots per burst). Shooting unlimited full-auto would freeze the action.

There are a lot of other full-auto airguns that can shoot for as long as the trigger is held down. They are the principal subjects of this new book.

Shoot out the star! – the Feltman
Anyone who’s been to an American carnival in the past 40 years knows about this game! A gun that resembles a Thompson submachine gun is loaded with 101 lead shot, and the shooter is invited to shoot out the red start, from a paper target. It’s next to impossible to do, but just shooting the gun is so much fun that practically nobody cares. The gun was invented around 1940 and became really popular after the war. It’s tethered to an air source that’s simply shop air (finally, an airgun that runs on a shop compressor!). The No. 2 lead shot goes out the spout at less than 300 f.p.s., but at close range they can do really dramatic things.

The Feltman runs on shop air.

The Feltman, as it is known, will shoot millions of shots with the most minimal maintenance and repairs. And, it operates on 90-125 psi! Consequently, it’s the air machine gun every advanced collector wants. A good used one can probably be bought for $400 to $600 today, and there is a place called Shooting Star, Inc., in Scotch Plains, New Jersey, where you can get your gun serviced. They also make entire new guns. (908-789-2500)

MacGlashan
A crew-served BB machine gun seems even more exciting. During World War II, the Army and Navy used thousands of MacGlashan BB machine guns to teach the fundamentals of aerial gunnery. This much larger gun is cycled by an electric solenoid and powered by compressed air. The air pressure is higher, at 180-200 psi, but the velocity runs between 500 and 600 f.p.s. Working MacGlashans are more expensive than Feltmans, but not unaffordable. They shoot run-of-the-mill steel BBs, so the operating cost is quite low.

MacGlashan BB machine gun was used as a trainer in World War II.

NewMatics PM-16
This is a realistic-looking .22-caliber M16 that fires 26 lead balls at 900 rounds per minute. Velocity is in the mid-500s, and the rifle can be fired either semiautomatic or full-auto. It operates on air pressurized to 1,800 psi. Inventor M.D. (Doc) Schavone has been marketing his gun to military and law enforcement agencies around the world for at least a decade.

He brought it to Maryland’s Damascus Airgun show one year and let the public shoot it, and I had the privilege of squeezing off a few magazines. The rifle recoils like the real deal and is fairly accurate. If it ever gets into production, Doc has plans to sell a version to the public.

These are but a few of the many air machine guns that exist. The new 324-page book tells the story of each, including a lot of material that most advanced collectors have never seen. It sells for $65, plus $8.40 shipping in the U.S. Contact the author at [email protected]