The 2300T is Crosman’s other remarkable new target pistol.

The OTHER new air pistol from Crosman is the 2300T, a more modest target pistol with only a few of the same features as the 2300S (read my 3-part blog about the 2300S. At first glance, it might seem quite similar, but closer examination reveals a host of differences. This is a pistol that must be evaluated on its own merits.

Out of the box
Just like the 2300S, the T model comes in a foam-lined box that can be used as a carrying case if you don’t already have one. Also, like the 2300S, the T requires that you install the rear sight, only this one is quite different from the S model. It’s more in line with other Crosman pistol sights, but made of steel and click-adjustable. A multipurpose tool for adjusting it comes with the gun.

No power adjustment
There is no power-adjustment knob on this pistol. Crosman rates it at 520 f.p.s., which is where they put the 2300S on high power, but they give the total number of available shots as 40 per powerlet, a decline of 20 from the more expensive model. I will be testing the one I have to give you an exact count.

Steel breech!
Like the 2300S, the T comes with a steel breech, fully dovetailed for scope mounts. The breech on this pistol is shorter than the one on the 2300S, but longer than the plastic breech on the 2240. (Read my blog about the 2240.) I realize that just means a slight program change on the CNC machine these days, but it speaks of the attention to detail Crosman paid each of these new pistols. A steel breech used to be available only as a third-party aftermarket add-on, and, of course, it enhances the option of mounting a scope.

Sights
The front sight is a squared post atop a raised plastic ramp, identical to the one on the 2240. The steel rear sight is a fully adjustable notch with white dots. The dots are unnecessary on a target pistol, and I wish they hadn’t been put there. Perhaps, the sight comes from another action pistol. Instead of clamping to the dovetails like the Williams sight on the 2300S, this one slides into a special cross dovetail and secures with two small Allen screws. Because it does slide in a cross dovetail, you get a greater range of windage adjustability than if it was simply clamped like the Williams. 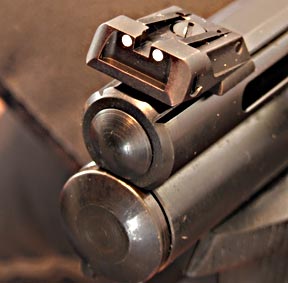 The rear sight is steel and click-adjustable. It could do without the white dots, however. Note the absence of a power-adjustment knob on this model.

Adjustable trigger
One feature that did carry over is the single-stage adjustable trigger. It is identical to the trigger on the 2300S, so you can both adjust the pull weight and also limit the overtravel. I measured the trigger on this test gun and got a low of 2 lbs., 14 oz. and a high of 6 lbs., 12 oz. There’s a moderate amount of creep in the pull. 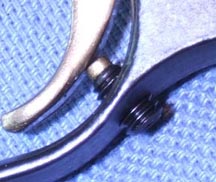 Small Allen screw in the triggerguard adjusts the trigger overtravel.

Barrel
The barrel is a 10+” steel barrel rifled by Crosman, so accuracy testing is going to be fun. We already know how well that Lothar Walther barrel works on the 2300S, so here’s the chance to see what a Crosman tube can do. I’m betting there will be little difference.

We’ll look at velocity and accuracy in upcoming reports.