I’m doing the blog just for myself. That’s not entirely true; I’m really doing it to save my sanity. When I answered a recent question about a common stock shape, I wondered what the internet might have to say on the subject, so I Googled the term “Monte Carlo.” One tactical site showed a stock without a Monte Carlo comb but with a high rollover cheekpiece, and they were telling people that the high rollover cheekpiece they were showing was a Monte Carlo shape! If that’s the best the internet can do, it’s time we explained a few simple and somewhat common rifle stock terms.

Stock terms
Let’s learn the right names for the parts of a stock. 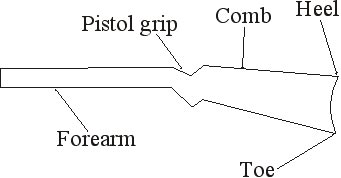 These are the correct terms for the parts of a buttstock.

Monte Carlo
The Monte Carlo stock is characterized by a high comb that drops to a lower line near the butt. A former ruler of Monte Carlo popularized this shape in the mid-20th century when scopes came into widespread use. This shape has an advantage for scope use because it raises the cheek and eye up to better alignment with the scope.

Though it’s less common than it was in the 1950s, it is still possible to have a Monte Carlo stock profile without a raised cheekpiece. The stepped comb is what makes it a Monte Carlo. 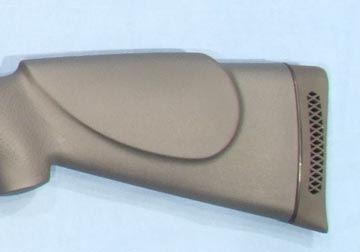 This is the most common form of Monte Carlo stock. The raised cheepiece is combined with the Monte Carlo profile.

Cheekpiece
A raised cheekpiece is a projection of the stock on the side where the shooters face touches the stock. Cheekpieces can be very low or extremely high, with the Tyrolean cupped cheekpiece found on some German/Austrian offhand target rifles being perhaps the highest of all. A cheekpiece can be combined with a Monte Carlo comb, or it can be on a rifle with a conventional comb, however at this time it is very common for the cheekpiece to extend out from the Monte Carlo comb. 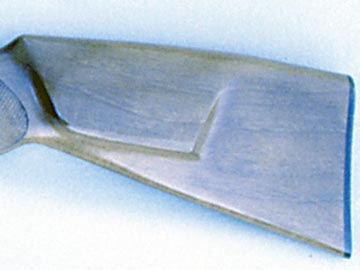 This stock has a raised cheekpiece without the Monte Carlo profile. This profile with the dropped comb is called the Bavarian style. It’s not Monte Carlo because the comb isn’t high in front and it isn’t stepped in the back, it just gently slopes down.

Bavarian stock
A Bavarian-style stock usually has a low cheekpiece, but is characterized by a drop in the line of the comb as it approaches the butt. When Robert Beeman first examined German airguns before he began importing them to the U.S. in the mid-1970s, he found many with Bavarian-style stocks. He imported them in the beginning, but his R-series guns were the same guns restocked with a more Western-style stock having a straight comb or a Monte Carlo comb.

This was a brief look at stock shapes and terms. I don’t want to bore anyone with stuff like this, but there is more to show, such as the various types of checkering, stippling and so on. If there is interest, I will do more reports like this.