Boy, you guys sure didn’t cut me much slack on the scope I selected for the gun! Of course Leapers 6-24×50 costs $20 more than the gun, but I was just trying to have a little fun. A real sniper rifle would have a 10x scope on it, so what I set up was somewhat overpowered.

In this report, we’ll take a look at shooting the UTG Master Sniper. From some of the comments, I know a thorough explanation is in order.

Loading
The gun comes with two magazines and a very nice speedloader. I found it a breeze to load without spillage. Once loaded, the magazine is slipped into its well under that stock. A word to the wise here. You have to deliberately push up the magazine until it clicks into place. If you don’t, it’ll work intermittently and you’ll be removing it all the time to clear a mis-fed BB. So, push it up flush! 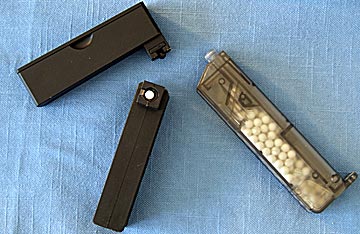 Handy speedloader on the right. The Master Sniper comes with two magazines. Each has a capacity of 24 BBs.

Adjustable Hop Up
Hop Up is a feature that puts a backspin on the plastic BB, so it leaves the barrel spinning backwards. That makes it cut through the air and fly straighter longer. You turn those curveballs into fastballs! The Master Sniper has an adjustable Hop Up that lets you tune to the brand and weight of BBs you use. There’s just one drawback – you have to tune the Hop Up to the brand and weight of BB you are shooting! 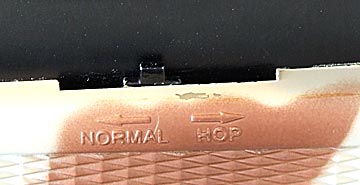 That lever slides forward and back to adjust the backspin put on the BB. It’s both quick and easy, yet very precise at the same time.

Instead of mounting a scope and adjusting it until the shots go to the point of aim, with adjustable Hop Up you first have to adjust the Hop Up and then the scope! If it sounds confusing, wait till you try it! I selected a target that was very visible (a wooden fence about 17 yards away. Then I found a spot on the fence that was easy to identify with both my naked eye and through the scope. I sighted the scope on this spot, then watched the BB go downrange with my naked eye. That showed me where the BB was hitting relative to the target, and also if it was curving. I made no attempt to hit the spot; just to get the BB going as straight as possible, regardless of how far off it was from the aimpoint.

The Hop Up on the Master Sniper is very sensitive and easy to adjust. You can feel when you’ve moved the lever a small amount. It took about 40 shots to properly adjust it so the BB was flying as straight as I could make it. Then, it was time to adjust the scope.

How does it shoot?
To cock the gun, the bolt is lifted and retracted, then pushed home again – exactly like a bolt-action rifle. Pulling back on the bolt compresses the mainspring, which is light, so the cocking effort is not too heavy. The oversized, rubber-coated bolt handle really helps you hold on.

The trigger is single-stage with a long, light pull. There is no creep – just a long pull. When the gun fires, there’s no noticeable recoil and only a slight noise upon discharge. The bipod really stabilizes the gun when shooting from a rest, and it’s so easy to cock that you can pump out a relatively high volume of fire.

Scope adjustment
After adjusting the Hop Up for the straightest flight, the BB was hitting low and left of the aimpoint by a few inches. It was fairly easy to adjust the scope to bring it back to the intersection of the crosshairs. Another reason I used this scope was that it was already mounted in some Weaver rings, and the Master Sniper has Picatinny bases that work with two-piece Weaver mounts. I didn’t need to adjust the aimpoint that much, so there was no need for adjustable scope mounts. Then, it was on to the the range and some target practice.

Ah, but that’s for another day!