I’m sure many of you long-time readers remember back when I did the CF-X “test” before actually shooting the rifle. That was back in January 2006. A month and a half later, I actually tested the rifle and discovered that a few of my assumption were off the mark. The rifle surprised me by being better than any Gamo rifle I had ever shot.

That should have prepared me for Mendoza, but I have to admit – I never saw this one coming! Several readers have commented that they don’t find their Mendozas to be all they expected, and the forums are similarly split as to whether these rifles are good or bad. Therefore, I was prepared for the worst, and I have refused to comment on the rifle until testing them. However, I have mentioned several times the bad things other shooters have said about them.

Now, I take it all back! Either Mendoza has changed their quality greatlyn or those shooters all got lemons! The rifles I’m now examining are beautiful! Today, I want to walk you around the RM-200 – a rifle Mendoza says is for young adults, but which I think all adult shooters will enjoy. This is a carbine-sized airgun with a length of 41″, a weight of 6.6 lbs and a pull of 13.5″. It’s sized for an adult, but it’s compact. It puts me in mind of the wonderful Beeman Webley C1 carbine!

It’s going to take some shooting to get rid of the excess chamber lube, but I expect the gun to settle down pretty close to the published velocity after that. We’ll see.

Fit and finish
Remarkable at twice the price! The blued steel parts are nicely polished. The wood stock is nicely fitted to the action, but the contour will seem a little strange to most shooters. The pistol grip region is taller and less deeply sculpted than other rifles – resulting in a stronger wrist. They made the wood thin through the cross section at this point, but the grip still fills your hand and makes the rifle feel substantial. The Beeman Webley C1 stock was similar, but they did it with a thick wrist.

The end cap is plastic, but every other black piece on the outside of the gun is steel with the exception of one of the two trigger blades. I believe that one is aluminum. The end cap is also a perfect scope stop, so no need to buy one of those. Just butt the rear ring against the end cap, and it will stay put. 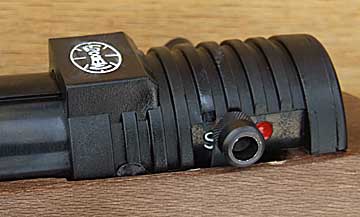 The end cap is also a scope stop. Butt the rear ring against the end cap, and it can’t go anywhere. The safety is ambidextrous.

Two trigger blades?
Yes, there are two trigger blades! But only one trigger. Now, how is that possible? Well, this is the strangest trigger I’ve ever seen. The two blades are set side-by-side, but the blade on the right (the aluminum one?) is slightly ahead of the one on the left. When the rifle is cocked, it moves further ahead of the other one. The forward blade is responsible for the first stage of the trigger pull and the rear blade is the second stage. I tried just squeezing the rear blade and nothing happened, so this design is a safety feature. The first stage must be pulled for the second stage to work. 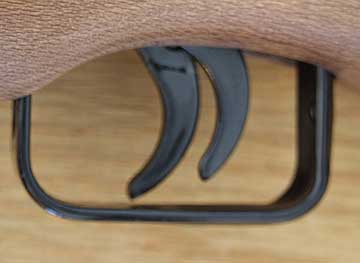 Front trigger blade is the first stage. When it gets even with the rear blade, the second stage kicks in. Unusual design, but safer than a single-bladed trigger because a slight pull will not fire the rifle. It looks like the front trigger is longer than the rear, but they align when the front one swings back.

Trigger-pull
I’m still getting used to the feel of puling two thin blades instead of one thicker one. I can’t say I like the feel of this trigger, yet, but I don’t dislike it. It’s just very different. However, stages one and two are differentiated. The rifle I’m testing has a 1-lb. first stage and goes off with 3 lbs., 6 oz. of pull. The trigger is not adjustable, but it’s light enough and crisp enough to do the job.

Tomorrow, I’ll cover the rest of the physical parts of the rifle for you.