We are talking about the airgun sport of field target and right now we are in the middle of a discussion of the targets, themselves.

Dick Otten targets
Dick Otten’s After Hours Target Company has produced the widest range of target types over the years. I have known Dick since he started his business, and I’ve been privileged to watch him grow as a maker. When he first began his targets were similar to the homemade kind, made of wood with metal washers around the kill zone for durability. That sounds real good when the committee is discussing it, but in practice, those wood targets get shredded by indifferent shooters pretty fast.

An early Otten wooden target. The kill zone is protected by a thick steel washer that you can’t see.

Dick moved on to steel targets and played with different paddle mechanisms for several years. He was always searching for greater reliability, which is very important in the field target game. And that’s something that you must learn, if you are going to pursue this sport. There are many makers of field targets who haven’t got a clue what their targets are being used for. They don’t play the game themselves and so they’ve never had occasion to use their own products. While what they make may look artistic, it may not function very well. Or they may just blunder and do it right without knowing it. 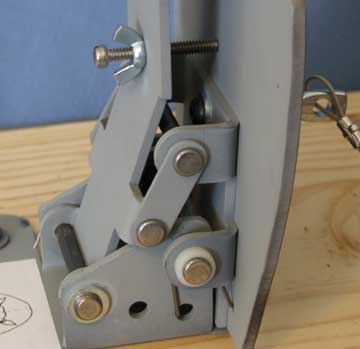 This is the Rolls-Royce of field target mechanisms. It’s butter-smooth, ultra-reliable and can be adjusted to fall with a cross look! Dick Otten makes it. 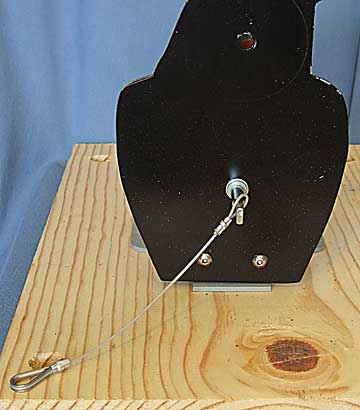 Here’s the front of Otten’s target. He’s put the reset cable on an eyebolt, way out in front, so it can’t get caught on anything. And he has put a fancy steel cable with a snap loop on the end. This is so easy to set up for a match! By the way, how easy is it to see that 3/8″ kill zone? It has a red paddle. Imagine it at 60 feet under the shade of a bush! 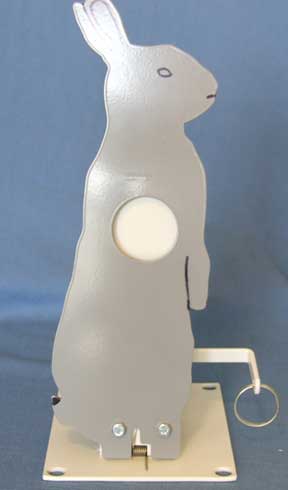 Air Arms target has the reset string attachment way out to the side of the target. Do you think they put it way out there because there is a problem with snagging? You’re right!

I have a bunny target (not the one shown above) that was made as a rimfire target, if you can imagine that! There is no rimfire version of field target, yet there used to be several targets made for it. They were made by target companies who often have little grasp of the market they serve. My target has a paddle that has absolutely no connection to the target! It is possible to knock the paddle down and leave the target standing. But if you pull the reset string hard when you reset this target, the paddle sticks in the kill zone in such a way that it drags the target back for a fall when it’s hit. It takes at least 12 foot-pounds on the paddle to get this one moving, but with a powerful rifle, this target works very reliably. It cannot be used in a match because of the power requirement, which I would like to discuss now.

How much power to topple a target?
I haven’t mentioned power before, but in field target the power is limited. Mainly the limitation is to preserve the targets. A Career 707 pumping lead out at 60 foot-pounds will often shake a target down without hitting the paddle. It will also leave dimples on the target, eventually ruining them. So most American FT clubs restrict the power of competing guns to 20 foot-pounds at the muzzle. My club would chrono each gun before a match and we also weighed the pellet before taking the shot. There was no room for argument with that arrangement, but we took the word of shooters using guns with adjustable power. If they promised to keep their power dialed back below the limit, they were good to go. I remember the one match when I shot my best ever score, only to realize after the match I had done it with my .22 Career set at 26 foot-pounds. There was no power check that day, but I always knew my high score was probably inflated a little by the extra power I used.

My club set its targets to fall with four foot-pounds on the paddle. That way, even 12-foot-pound airguns could be certain to work all the targets out to 55 yards. On match day, I tested every target with a .177 air pistol at point blank range. If they didn’t fall – and in the beginning a great many did not – then we either adjusted them on the spot or swapped them out. That was actually a Darwinian practice that eventually removed all the weak sisters from our stable of targets. We wound up with a group of proven targets that we reserved for matches and a few troublemakers that we put on the sight-in range.

The fallen target must get up!
Knocking them down is only half the battle. The targets have to stand back up reliably every time or the match is over before it gets started. This is where bad field targets show their true colors. Pull cords can get easily fouled in superfluous hardware sticking out of the front of the target and nothing you do from the firing line will reset it. Then you have to call a cold range and walk down to untangle it. After the third or fourth time, that gets old. Good field targets reset without problems – and there used to be darned few of them that did. Today’s targets seem to be more reliable as a whole, but they still are not perfect. And please don’t ask me whether such-and-such a target works good or not. I have no way of knowing without trying them all, and target makers change their designs without telling me.

Painting targets
Field targets can be works of art, or they can be simple silhouettes of animals with a single color. The work of art is a thing to behold – but maybe not to shoot at. Give me a simple paint scheme every time. Experience has shown that a simple black target is the easiest to see in all light conditions. The paddle should be a contrasting color. My club used international orange, blaze green and red. The orange paddles were easiest for me to see because I am colorblind. The red paddles were barely discernible against the black targets. Remember – these targets can be under a bush 40 yards away, so light is very important.

After the paddle has taken 10-15 hits, the color will be gone. Then it is a shiny gray color. My club stopped in the middle of a match and repainted all targets. With two people working, it takes just 10 minutes to repaint 30 targets both black and orange. This break, which was usually 30-45 minutes long, gave everyone a chance to top off their reservoirs and have a quick lunch. Restroom breaks were also taken then, or during the match, and handled within the squad that I will discuss next.

I am finished with the targets, but I’ll probably have to come back to them as we move forward. Isn’t it amazing how much there is to these simple mechanical devices? A successful field target club probably spends more time on its targets than any other single aspect of the sport.