Before we begin, Vince called my attention to something I said in the first report that was wrong. I said the articulated cocking lever of this rifle was held against the spring cylinder by the geometry, but I didn’t look close enough. Vince told me to look for a roller bearing on the long link and, sure enough, it’s there. It’s just on one side of the link, which is why I overlooked it, but hey – it does the job! Thanks for watching my back, Vince.

This is the big day! The first independent report on the Gamo Hunter Extreme’s true velocity. No smoke and mirrors. No retakes for the camera. No corporate jolly-isms. Just the truth.

Perfect summer day
You could not ask for a better day to test an airgun. No wind to stir things up. An overcast sky for perfect chrono readings every time. No interruptions of any kind. Just me and the big rifle by ourselves on the range. So, no excuses today. This is the way the rifle shoots!

Cocking is hard!
This is not a casual plinker. Did I mention that? It cocks with 52 pounds of effort, but the last few inches of cocking is where 20 percent of that effort is needed, and it just stacks up on you. This will be a two-handed operation for most adult men, and there will be shooters who cannot cock this rifle at all. Please believe me – I am not playing macho games. This is a difficult rifle to cock – even harder than the Webley Patriot.

I really like the scope!
Remember in the first report that I said I’d have to see whether or not I liked this new reticle. Well, I do. It’s a good hunting reticle that makes targeting easier than a plain crosshair or even a duplex reticle. And, the scope and scope mount stayed put throughout some sharp recoil and semi-harsh vibrations. Though the Hunter Extreme is no match for the heavy-recoiling Webley Patriot, it does kick harder than a Beeman R1, for example. Anyway, nice scope! 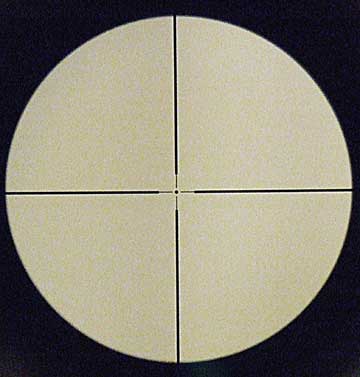 This reticle is great for targeting. I think it will work well for hunting, too. Only the dot in the center lights up (not lit now).

Lousy trigger!
This is the worst trigger I have tested in a very long time. It breaks somewhere over 8 lbs. and has more creeps than a motel lounge. It does feel as though it will break-in over time, but in the beginning it’s not a good trigger. I’ll blame some of the poor accuracy on the trigger, as it was just too hard to squeeze.

On the plus side, no annoying automatic safety came on. That I like a lot. Just cock and shoot. However, when you do cock the gun, you’ll feel each and every spring coil slide through the cylinder in a crunchy parade. This isn’t a smooth-cocking air rifle, and it probably will never be until someone tunes it.

On the shooting end, it’s just as noisy. It jumps sharply in recoil and buzzes more than it should. Compared to the smooth-shooting Gamo CF-X, the Hunter Extreme sounds and feels like a geriatric Transformer with arthritis! Let’s shoot it.

Drum roll, please!
I load a golden Raptor PBA pellet and close the breech. The pellet falls out. I load a second Raptor and take care to seat it deeply with my thumb. This one stays put. The rifle is lowered to the Oehler Chronograph screens and CRACK! – the shot is fired. The pellet definitely broke the sound barrier! And the velocity?

1352 f.p.s. (lonely sound of dog barking in the distance and crickets chirping). 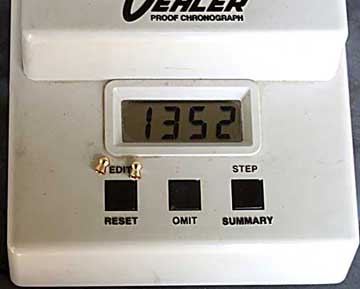 Not quite the number we were told.

The particular Gamo Hunter Extreme that I am testing is NOWHERE NEAR 1,600 f.p.s. Despite a huge advertising budget and all the fairy dust in the free world, you people simply did not clap loud enough and long enough. Tinkerbell died!

To make CERTAIN that you get their message, Gamo has engraved the freakin’ velocity formula on the outside of the spring cylinder of the rifle, right next to where the pellet is loaded. What’s the matter with me? I saw the numbers, yet I still failed to achieve the corporate goal. I must not be a team player. 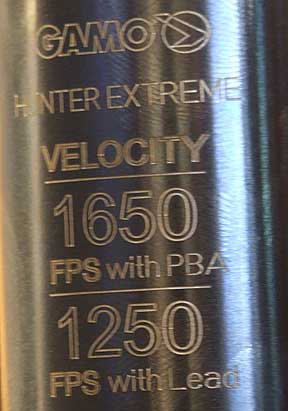 In case you missed their million-dollar advertising campaign, Gamo has been kind enough to ENGRAVE their velocity formula on the steel compression cylinder of their rifle for you. I have never seen this on an airgun before. It’s like they are hoping to be exposed.

The preceding rant is how I do an in-your-face victory dance on the internet. There wasn’t much doubt that this gun could not live up to its advertised velocity. Every PBA Raptor I’ve tested so far has only increased velocity of any given rifle by about 150-200 f.p.s., so how is this one suddenly going to fly 400 f.p.s. faster?

Okay, back to reality. The velocity with Beeman Kodiaks ranged between 987 f.p.s. and 1,012 f.p.s., with 998 being the average. That gives an honest energy average of 23.45 foot-pounds at the muzzle. Gamo ought to be proud of that. They also ought to recognize that this is a 30 foot-pound rifle if they would just make it in .22. If they expect to sell a bunch of $500 breakbarrels – even with the nice scope thrown in – they’d better convert it to something people can actually shoot and get off this pig-killing velocity trip they’re on.

I did not test the rifle with lightweight lead pellets to ascertain whether the claim of 1250 with lead pellets is accurate. I can, if you really want me to, but that isn’t high on my list of things to do. Just as I would never shoot a pellet at 1350, I would also not shoot one at 1250, so what’s the point of testing even more of what we wouldn’t do anyhow?

All kidding aside, the Hunter Extreme is the fastest spring air rifle I have ever tested, though I haven’t tested the other fast ones with PBAs, and Gamo should be proud of that. It may not be a 1600 f.p.s. rifle, but it’s still king of the hill for breakbarrels.

All I’m reporting on today is velocity, so the next part will cover accuracy. I have not closed the book on this air rifle, despite the things I said about the velocity claims. This is still a $500 air rifle that deserves a fair test, and I intend to give it one. 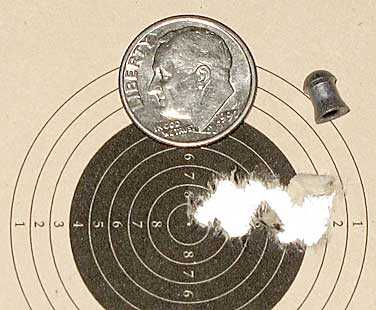