A natural hold needs a gun built on an angle
The USFT is built in a canted configuration, so the seated shooter doesn’t have to adjust his body. It did make aligning the scope more of a challenge, since I normally align the vertical reticle with the receiver. On this rifle, the receiver is offset to the side until I am seated and holding the gun properly. The scope had to be aligned with me in the seated position. I still don’t have it exactly right; but, once I do, the scope will force me to shoot without a cant. There is no problem in the offhand position, either, because the reticle of the scope aligns you to level. The pistol grip is canted to the right side for a more natural grip angle. Plus, my rifle’s grip has a target palm shelf for stability.

Scope
I opted for 30mm Leupold quick-disconnect scope rings, so the rifle came with a Weaver base. I used a Hakko 8-40x56mm scope dialed all the way to 40x. This is a dark, muddy scope that usually cannot be used at this magnification, but I had bright sunlight on the target, so it was fine. Although there is no scope level (yet) on the gun, I used reference points on the target to level every shot.

Accuracy
This is what you have all waited for, I know. How bloody accurate is this thing? To find out, I shot from a bench. I used the bipod as a rest and I tried both Beeman Kodiaks and JSB Exact diabolo heavies (10.2-grain) that McMurray told me were among the best pellets. Pyramyd has a super deal on H&N Baracuda Match pellets, which are identical to the Kodiaks, so you can save several dollars per tin by buying them. I only shot the gun about 50 times, so what I’m about to show you is very preliminary. The day was windy, with gusts over 15 mph from 6 o’clock. The distance was 50 yards. I sighted in with Kodiaks and then shot the best groups with JSBs. The best five-shot group of the session measures 0.355″ c-t-c, which is smaller than 3/8″. But all JSB groups were under a half-inch. 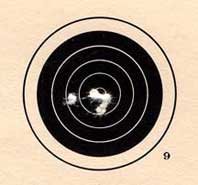 I also show the test target sent with the gun. It is 25 shots with Kodiaks at 51 yards, and measures 0.663″. Twenty-five shots is nearly a large enough number that this group is not a statistical prediction at all, but a true validtion of this rifle’s accuracy. The small size of the group speaks volumes about the pedigree of both the system and the barrel. 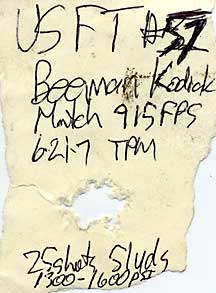 Do you need the USTF?
I am not a national-class FT shooter, yet I own this rifle that could easily win at that level. Am I foolish for owning it, since it is a dedicated competition rifle and not just a general-purpose airgun? I don’t think so – any more than I think you need to be an Olympic competitor to own a world-class 10-meter target rifle or pistol. I got it to explore the possibilities of pneumatic airguns…how accurate they can be, how ergonomics affect shooting and how efficient a pneumatic valve can be.

This rifle has no regulator, yet it performs as though it had one. Regulators are high-maintenance items that are the weak link in the guns that have them. The USFT is a breakthrough mechanical technology that combines efficiency with reliability and great precision. Even if you never own one, you’ll benefit from it because other manufacturers are looking at what it can do and will be influenced by it for decades to come.