Routine maintenance – continued
The pump lever must be adjusted correctly for the Daisy 717 to achieve maximum power. The test is to open the lever as far as it will go without cocking the bolt. Then close it until you feel resistance. The tip of the lever should have stopped between 1-1/8″ and 1-1/2″ from the side of the receiver. When I adjust it, I try to get as close to 1-1/2″ as I can. I feel that gives the highest possible velocity. 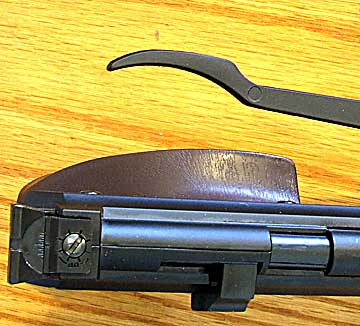 Looking down from above the pistol. Tip of the lever is about 1-1/2″ from the side of the frame. This is where it stops when the lever is worked without cocking the gun.

Let’s adjust the pump lever. With the lever open as far as it will go, the pump lever adjustment mechanism is seen to the left (in front) of the felt wiper. There are two notched rings. One is attached to the pump lever mechanism and is fixed. The other is the head of a large adjustment screw attached to the pump head assembly. It can be rotated in either direction by using the flat blade of a large-bladed screwdriver as a lever. Insert the blade into both opposing notches and rotate the blade as if turning a screw. The rotating ring on the right will move in either direction, depending on which way you turn the screwdriver. Turn counter-clockwise to increase lever clearance and clockwise to decrease. 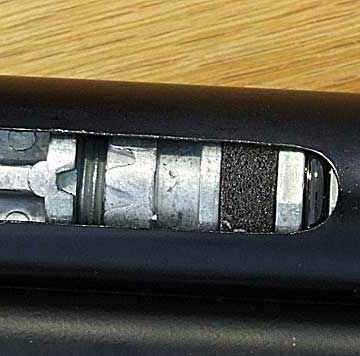 The slots in the adjustment mechanism accept the blade of a large screwdriver. 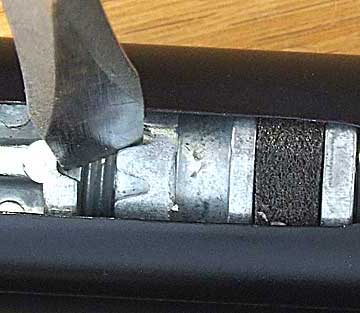 Screwdriver tip works as a lever to rotate the adjustment ring in either direction.

Sights
The sights on the 717 are crisp target sights, fully adjustable in both directions. Though they do not have click detents, you could hardly ask for a better pair. Both adjustments have indexes that show where the sight is positioned.

Velocity
Advertised velocity for this gun is 360 f.p.s. I chronographed three different pellets and got these results:

The H&Ns are very clearly best for the pistol I’m testing. I actually tested several other brands, including some that are no longer available, but the H&Ns buried them all.

My test gun is new and I adjusted it as discussed above. Also, I lubricated this gun heavily. Both these steps will improve the velocity in most guns.

Accuracy
I set up a 10-meter course and lighted the target well. I also wore my shooting glasses that sharpen the front sight and target dramatically. The pistol is very muzzle-heavy and the stiff trigger makes the hold difficult, but nothing can hide the target accuracy the 717 has to offer. 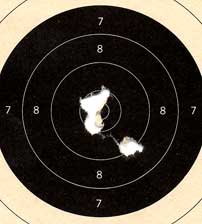 It’s quiet!
One final comment about this pistol. It’s very quiet. This is the pistol I used to shoot target practice in an office building when there was an adult education class in the next room. No one heard anything. So, shooters who have very great need to remain silent, this is a gun to check out. It sounds loud when shot without a pellet but quieter with one. And, shoot into a Quiet Pellet Trap for maximum noise reduction.

This pistol proves you don’t need a pedigreed barrel for accuracy. The trigger needs to be broken in, but this is an airgun with which you can form a lifelong relationship.