Today’s topic was raised by a casual comment I made last week about shooting glasses making the front sight sharper. Rabbitt asked for an explanation and then one or two others chimed in with interest, so I thought I’d share with all of you this well-publicized “secret” to better shooting. The kind of glasses I’m talking about today are not for eye protection, though they do that as well. Their primary purpose is to help you see the front sight and target when shooting a target gun. Glasses are used by both rifle and pistol competitors, and even by archers, but since I know pistol glasses much better, they are what I will describe today.

What do they do?
Shooting glasses contain one lens for the master eye, and if you have a corrective prescription, that lens can be ground for you. But not all shooters need correction. Therefore, a master eye lens can also be clear glass. You see, vision correction is only one thing the glasses do. The other major benefit is that they allow the shooter to adjust his own eyes, overriding the automatic light-controlling iris in the eyeball. That’s where the real magic happens.

Adjusting your iris?
Shooting glasses contain an adjustable iris over the master eyepiece that lets the shooter adjust to the light on the range. The lower the light, the more open you have to make the iris to see the target well. In case you hadn’t noticed, lighting on a shooting range is controlled so that a lot of light falls on the target, with relatively less anywhere else. 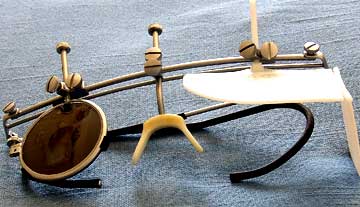 Shooting glasses have an extremely adjustable frame on which all manner of optical shooting aids can be mounted. White blinder on the right (on left when glasses are worn) flips up for better vision when not shooting. 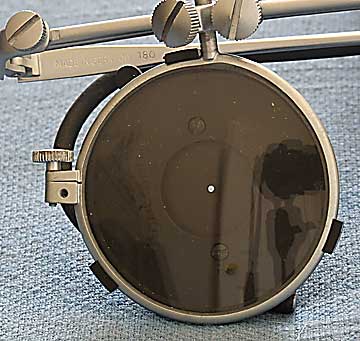 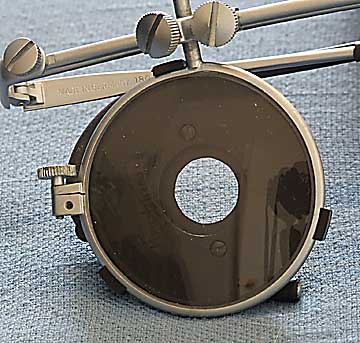 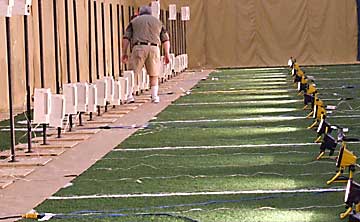 Part of the target line at the 2007 NRA/Pyramyd Air National Junior Airgun Championships. There is a halogen light in front of each position.

This light is then received by the eye, but when a stooter looks at a wide enough angle, like 200 feet, or so, so much light overpowers the eye, causing it to adjust down to a pinpoint opening for protection. The adjustable iris on the master eye of the shooting glasses lets you select only the light falling on your own target, so your master eye pupil can open wide. That does something remarkable. The iris on your shooting glasses then acts like the adjustable iris in the lens of a camera, while forcing your own eye to assume the properties of a very fast film. You photographers know what happens when you stop a lens down to a very small aperture. You get incredible depth of field. Objects both near and far are in focus! The “speed” of your eye keeps things stay in focus in real time (you don’t have to stare at them a long time to see the image).

The miracle of shooting glasses!
They let you see both the front sight and the bullseye in sharp focus at the same time! Even the rear sight is in relatively sharp focus. You cannot usually accomplish this without shooting glasses, though how you light the range does help a lot.

What else do shooting glasses do?
You’ll notice that the other eye has no lens at all. It is covered by a plastic blinder, or shade that blocks light from the front and side. That allows the shooter to keep that eye open without seeing anything distracting. The master eye becomes stronger because it’s the only eye that works. The result is a sharp image of the front sight…and the target is nearly as sharp. This increases the precision of your aim a great deal. The blinder can be lifted easily when you need depth of vision for walking or even loading your gun.

I use Knoblock glasses – one of several brands with similar features. As you can see, they are incredibly adjustable to fit your face perfectly. My glasses cost about $110 ten years ago. Then, I had to have the master eye lens made. I thought that might be a real pain, but when I went to Lenscrafters in the mall, the doctors and on-site lab knew all about shooting glasses. Apparently, every large community has hundreds of shooters asking for the same thing. It was easy for them to grind my lens to fit the frame and my prescription. That was another $100. Everything else (the final adjustment of the glasses) was up to me.

Cannot compete without them
Shooting glasses are worth at least 10 points in a match, so you absolutely cannot compete without them. You might be able to make do at a local level, but when you get up against real shooters at the regional and state level, you need every trick in the book to win. Just as I have seen people shooting Daisy 777s in regional matches, I have also seen plenty of shooters without shooting glasses. None of them ever won, though. 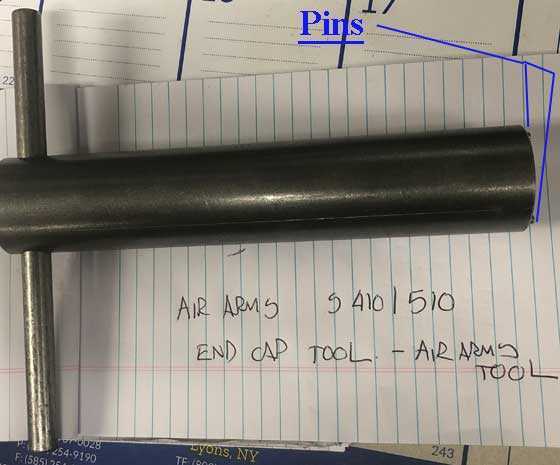