Well, it seems this modification has stirred up some interest among our readers! Today, I’ll pump the rifle and chronograph it for you. I’ll also pass along some tidbits from the inventor.

By now, you know that the whole purpose of this modification is to make it easier to pump the Benjamin 392 and 397. It doesn’t add any power or affect the accuracy in any way. Whatever is built into the airgun at the factory is what you get, only it will be easier to pump.

How does it feel to pump this gun?
The pumping experience is very different than a stock rifle. In the first place, it’s noisy. Bob intentionally designed the linkage with some loose tolerances, so the pivot pins seem loose. That allows the linkages to “clack” when you pump. He found that it’s easiest to pump the gun if you keep a rhythm going, and I agree with that. However, the pumping effort is so easy that I found myself forgetting how many pumps I had put in. With a stock 392, you can feel the resistance increase. Not so with this modification; counting the strokes is more important.

A second thing you’ll notice is that the pump wants to spring open every time you lift the forearm/pump handle. Bob tells me that the main load-bearing links in the pump are made of very high-grade chrome-moly steel and fully hardened, so they act like springs. The pumping arm itself is made from solid steel, though it doesn’t need to be because it doesn’t take that much stress when pumping. The pivot pin, where the three links come together, is an aircraft-grade pin acting as a journal with a hardened stainless steel pin as a bearing. It has shown no signs of wear after thousands of pumps.

It takes just 14 lbs. of effort
Yesterday, I told you it takes 12 lbs. for each pump stroke, but some test data sent to me by the inventor indicates the force is actually just under 14 lbs. He had a chart at Roanoke to show perspective buyers the difference in force between his modified gun and a stock gun. I’m showing that chart below, but it’s too small to read. The darker purple bars are the modified rifle and the lighter blue bars are the stock gun. Only six pump strokes are shown, but I have taken the rifle up to ten strokes and can tell you there is no increase in effort. What does happen is that the force you apply starts earlier in the pump stroke on the later pumps. 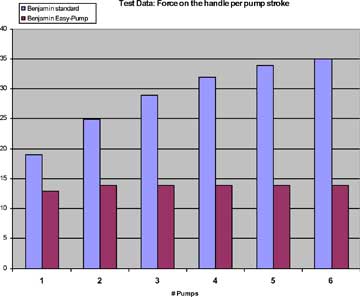 The darker bars are the modified gun. The force doesn’t change all the way to the eighth pump.
The pump handle extends as the pumps increase
As the modified rifle is pumped, the forearm/pump handle starts to extend slightly from the stock. With no pumps or just one pump, it fits flush and the joint between the two wood pieces is relatively tight. With two or more pumps, it stands proud from the stock. After noticing this, I found I could tell whether or not the gun was pumped and approximately how many pumps it had in it by how high the pump handle was standing. In spite of this, the handle remains tightly in place and shows no inclination to pop out. 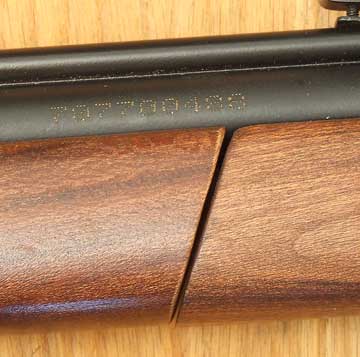 With no air in the gun, the pump handle remains flush with the other wood. 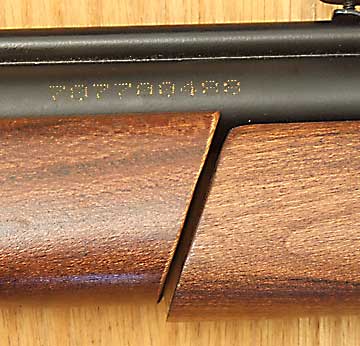 With 8 pumps in the gun, the pump handle is noticeably proud at rest.
Velocity
Shooting 14.3 grain Crosman Premiers, the gun delivered the following average velocities:

Velocities were extremely consistent for a given number of pump strokes. After all testing, I fired the rifle with three pumps and it went 431 f.p.s. again.

The manual says 8 pumps are max, but I fired a second time after shooting on 9 and 10 pumps and there was no air remaining in the gun. The advertised velocity for this rifle is 675 f.p.s., so the one I have isn’t performing up to snuff. I can overlook a small variation, but this one isn’t that small. If you use the recommended 8 pumps as the max, the difference is almost 100 f.p.s. I will test the rifle later to see if there has been an improvement.

Stay tuned for the next report