Before we begin I have an announcement. Pyramyd Air now has a podcast radio program about airguns. Tom Gaylord will do periodic podcasts about airguns and airsoft, and it’s on the main blog page. Look in the right-hand column, under Links.

Today I will talk about the organization of the squad and how it serves a field target match.

What is a squad?
At a field target match, shooters are randomly placed in squads of at least two shooters, but three are ideal and sometimes even four are necessary at crowded matches. The squad moves from lane to lane as a group, though each shooter is competing by himself against all other shooters in the match. The purpose of the squad is to divide the labor of the match so things move faster and smoother. Labor? There is labor in a match?

Well, it isn’t debilitating, but yes, there is labor. While the shooter is busy shooting, someone else is keeping score. The shooter is too busy adjusting his position, getting pellets and adjusting his scope to be bothered with binoculars, a clipboard and pencil, so another squad member handles that duty. Binoculars, you say? Why binoculars? Well, they aren’t required by regulation, but I do recommend them. They make it easy to see if a target was hit properly or if the shooter has a possible alibi, or claim that the target should be scored, even though it didn’t fall. It’s easy to see out to 25 yards with the naked eye, but sometimes at 40 or 55 yards things happen to the targets that need to be witnessed. I always used binoculars for that. But even if the scorer doesn’t have them, it’s always best to have a second pair of eyes watch the target, in case of a malfunction. 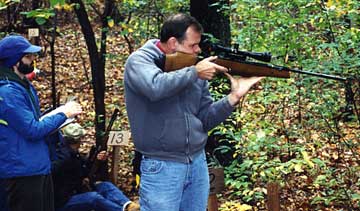 Squad member scores so shooter can concentrate on one thing. 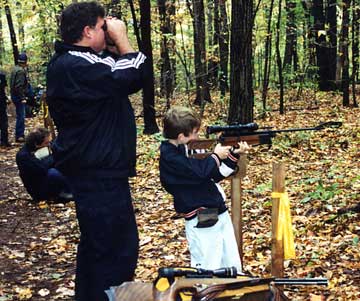 Dad acts as spotter for his son. Note the young man is shooting a PCP, while dad seems to have a TX200!

Shooters are trusted to keep score
So the shooters in a squad keep their own scores. Each shooter is scored by another squad member, of course, but we do trust the squads to be honest about the scoring. In four years of running matches, I never saw a single problem doing it that way. But when the match is elevated to the state level or higher, things have to be more formal, so other steps are taken that I will mention in a moment.

Another thing the squad members do is go downrange to fix the target if something happens. The shooter has taken no small amount of time to get settled in position, adjusting the bum bag (I will address this item of gear in a later post) and perhaps strapping into the harness (a later post). We don’t want to disturb him, once he gets settled in. But the squad members who are not shooting are free to do things like fix the targets. At my club we didn’t call the whole range cold when a target needed fixing – just the lanes adjacent that would ensure the safety of the personnel walking downrange. You have to use judgement when doing this, of course, but it’s pretty easy to see what needs to be done when you see the layout of the course. 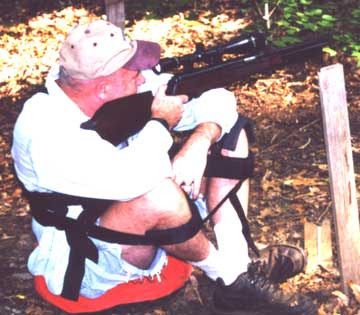 Once a shooter gets trussed up like this we don’t want to waste his time with superfluous tasks. Let him shoot. Another TX200.

Safety
Every shooter is briefed about the course before the match, like how the day will go and various safety procedures. Then they are all deputized as safety officers – or at least that’s my recommendation. Anyone could call a cease-fire at my matches, and we had occasion to several times. One time a visitor was walking down the path and stepped in front of a shooter who was positioned well back of the firing point. A sharp squad member called an immediate cease fire, which drew everyone’s attention to the infraction (except the guy who committed it, of course). I then had a discussion with the walker and learned that the match was so quiet that he wasn’t fully aware of any danger! He had come to our match to see what field target was all about, and although the match was in full swing, it was quieter than a golf tournament, so he assumed nothing was happening. But that quick cease-fire call may have saved him from a trip to the emergency ward to get a 10.5-grain Crosman Premier dug out of his thigh!

Personal time
Another thing squads do is give each of their members time for things like refilling their guns, making repairs, eating lunch, hauling gear from the car, going to the bathroom and other personal things. If you are not keeping score, you have 5-7 minutes of time to yourself. The squad is like a team of buddies in combat. Every man is in the war for himself, but you help your buddies, too.

How squads are formed
As a match director, I found the best way to form squads was by random selection, but it wasn’t always that random. If the match was just a normal one with no special significance, I had no problem with people asking to be squadded together. People like to be with their friends, and part of the enjoyment of the sport is the friendship. Also, shooters will often band together so one can coach another during the match. There’s nothing wrong with that.

At a state-level match or higher, however, random squad formation is more important. At that level we want no hint or possibility of collusion during the match. So the buddies have to be broken up by random selection. And in the very high matches, separate scorers often are assigned to the squads.

The negative side of squads
While I never had a problem with squads being honest, there was another very real problem. There will always be certain shooters that nobody wants to be squadded with. We had one who was a motormouth. The guy never shut up! Others shooters would come to me privately and “take the duty” by volunteering to be squadded with this guy, but as match director I had to take my share of turns with him, too. He was a wonderful shot – just couldn’t zip his trap.

I bet those of you who haven’t yet shot a field target match haven’t given any thought to squads. Why would you? They aren’t anything glamorous or worthy of study. But squads are the core of running a match smoothly. Later on in this series I’m going to tell you how to start a field target club of your own, and you will need hints and tips like managing squads if you do.