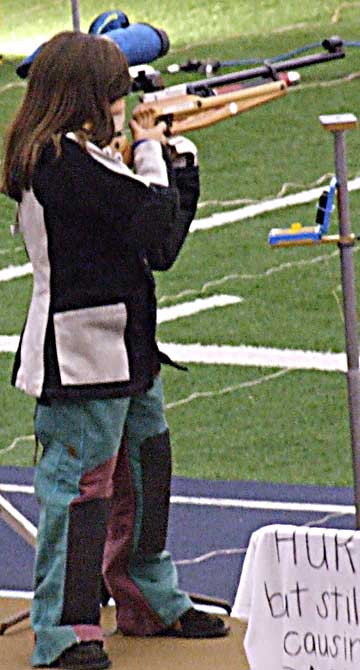 Several readers requested this report, and I’m glad to finally start it. Before we begin, allow me to define the sport as I will report it. Ten-meter air rifle competition is divided into men’s and women’s divisions. Men fire a course of 60 + 10 shots per event and women fire 40 + 10. Men have 105 minutes for the first 60 shots and women have 75 minutes for their first 40 shots. I will explain what “+ 10 shots” means in a later report.

The U.S. National Rifle Association (NRA) also has 10-meter competition, but their rules and equipment differ significantly from the formal rules of the International Shooting Sports Federation (ISSF). The ISSF rules prevail in the World Cup and Olympic competition, and that’s what I’ll report.

Shooting position
The only shooting position in ISSF competition is standing. The NRA uses kneeling and prone as well as standing; but at the world level, the competitors stand.

Target
The ISSF target is also used by the NRA, but the hits are scored differently. The NRA credits a pellet hole that touches the highest scoring line, while the ISSF requires that the line be broken by the pellet hole to score. Actually, in ISSF competition, targets as we know them are not used. Instead, they use a paper roll in a target frame that is instrumented with three sound transducers. The transducers can detect where the pellet tore through the paper by triangulating the sound of the paper tearing. Then, they plot the hole on a standard target overlay, and it appears on a video monitor at the shooter’s position. This method has been demonstrated accurate to the thousandth of an inch, so arguments about scoring are a thing of the past. 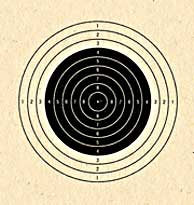 This is the real deal – a German 10-meter rifle target sized pretty close to the actual size. The dot in the center is the “10-ring.” The paper is a stiff, tan non-reflective paper that doesn’t tear along any grain. Pellet holes are as clean as they can be.

The shooter sees a black spot that looks like a target and functions like one because of the electronic system in place. Not only is scoring easier, all tabulation of scores is entered into software, so what was once a laborious project is eliminated, plus the scoring and tabulation is faster and more accurate.

Caliber
The .177 caliber is mandatory. All scoring equipment (optical, mechanical and electronic) is built around .177 caliber and nothing else is permitted in ISSF competition. All guns and related equipment (pellet boxes, etc.) are available in .177 caliber only.

Wadcutter pellets
Wadcutter pellets are the only type of pellet used by 10-meter shooters. This follows the bullyeye pistol crowd that converted to wadcutter and semi-wadcutter bullets decades before world-class airgun competition commenced in the 1960s. When the scoring was done mechanically, a crisp hole left by a wadcutter was essential.

There are many variations on the theme, but all wadcutter pellets have a flat nose to cut a perfect circle in target paper. 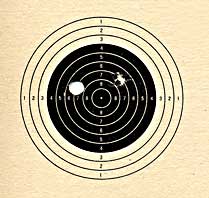 Hole on the left cut by a wadcutter, domed pellet cut the hole on the right. Which would you rather score?

Velocities
Although velocity isn’t regulated, per se, no 10-meter target rifle shoots a pellet faster than 600 f.p.s., with the average muzzle velocity being around 575 f.p.s. Velocity for rifles has declined since the 1960s, when the first true target air rifles were built. In the days of the FWB 300 and the Anschutz 250, the muzzle velocity was more on the order of 640 f.p.s., but a shift to CO2 and precharged pneumatics has brought about a reduction in speed, which also conserves the number of shots from a fill of gas or air. Having a lower velocity that match officials can rely on has made the construction of ranges and pellet traps easier, plus it’s made it easier for insurance companies to write policies for events.

Powerplants
Ten-meter guns no longer have spring-piston powerplants. The Chinese BS-4 is the last hanger-on, but you won’t see one in any national competition. In the 1960s, spring guns were very popular, but when CO2 rifles came on the scene, the springers vanished from the world scene. Clubs still have them, but top shooters prefer their own rifles and no longer choose springers.

CO2 is still used, but fewer and fewer shooters choose it as time goes by. It’s one of those things where a shooter has a rifle that shoots and it happens to be CO2. They aren’t about to change because the rifle does so well. There’s still a small contingent of single-stroke pneumatic users, which keeps rifles like the FWB 603 on the market. But, PCPs have really taken over as the powerplant of choice.

I plan to cover the rifles in some detail. I’ll also address sights, shooting equipment such as jackets and gloves, and shooting positions. Please tell me what else you’d like me to address. 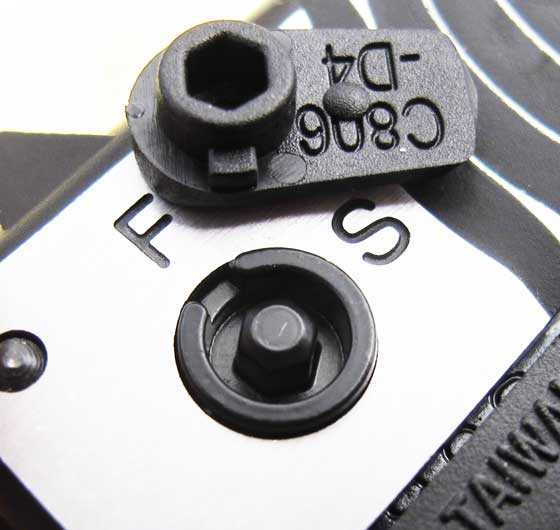