For those with Christmas money, here are some sales at Pyramyd Air. All Drozds and Drozd magazines are on sale. For Daisy lovers, there’s a 1-week sale on Red Ryders, Red Ryder kits and the 4841 Grizzly C pneumatics.

Okay, serious testing today. I received a comment from a reader on the first report of this pistol complaining that I only look at “junk” airsoft guns. He encouraged me to look into other models that he considered not to be junk, among them a Tokyo Marui Hi-Capa 5.1 pistol. He told me his 5.1 can out-shoot a Benjamin 392 at 15 yards.

I doubt that. I tested the Hi-Capa 5.1 for this blog back in 2005, and, while it is very accurate, it cannot keep all its shots on a nickel at 10 yards, let alone 15, while the 392 can. Folks, I make no claim to be the world’s expert on airsoft guns. I test them because we have some readers who want me to. I used to put them in Airgun Illustrated for the same reason. But I am a democratic tester. I will test any airgun or airsoft gun that I have access to. YOU may not like the gun I’m testing today, but believe it or not, there are many who do. Tomorrow or next week, I’ll probably test a gun YOU like.

I’m saying this because this blog is not some forum where only certain airguns are acceptable. This is about all airguns – period! Everybody gets to play!

Velocity first
I weighed the BBs that came in the package with the pistol and found they were 0.20 grams – exactly what I expected for a gas pistol. I’m probably misreading the manual and they don’t recommend 0.12-gram BBs after all. The manual seems to indicate the gun’s velocity should be 325 f.p.s., so we’ll see how that stacks up against the different weight ammo.

Is it accurate?
I shot this pistol ’til the cows came home. I think someone requested that I test it at 10 meters, so I tried to do it. But this isn’t a 10-meter airsoft pistol. Just like the 9mm P38 it copies, the accuracy falls off fast as the distance increases. At 15 feet, I was shooting acceptable groups. At 25 feet I couldn’t keep the BBs on the target! 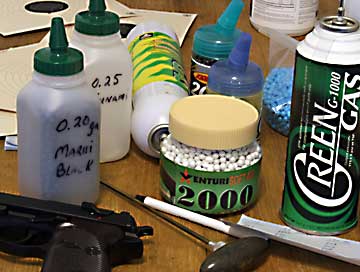 I went through a lot of gas and different BBs testing the P38.

I tried 0.20-gram and 0.25-gram BBs, but not 0.12-gram. They were moving too fast for good accuracy, and I was shooting indoors. The absolute best accuracy was a tie between some Tokyo Marui black BBs I have and Air Venturi BBs! I tried lots of different ammo, but these two BBs stood out. Not only did both group well, they both shot to the point of aim, which is a big deal when the sights don’t adjust. 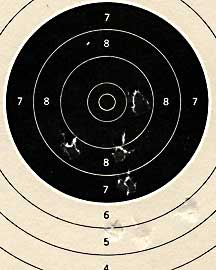 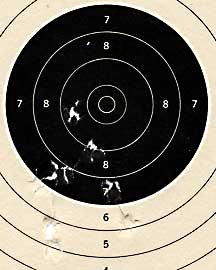 Marui black 0.20-gram BBs were about as good as Air Venturi at 15 feet. 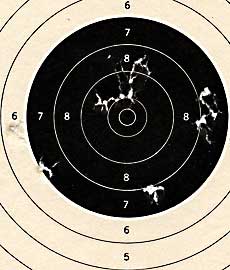 At 20 feet, the groups started opening fast, as these black Maruis show. At 25 feet, I was missing the target paper altogether.

Loading the magazine
The magazine holds 12 BBs in a single stack. That’s only 50 percent more than the 9mm firearm. The onboard green gas reservoir is just large enough for a single magazine, so each time you reload, you also gas up. Loading is one at a time through the release gate at the top of the mag – no speedloaders here. Loading is deliberate and one hand pulls down on the follower while the other loads the BBs.

A P38 has the same magazine release as many European pistols. It’s located at the bottom rear of the grip frame, where it takes two hands and a lot of time to drop the mag. The slide release, on the other hand, is right where a right-handed shooter wants it, so you can release the slide with the thumb of the shooting hand without changing your grip on the gun. I forgot to mention that the safety is also a decocking mechanism, so there’s no putting it back on without recocking the hammer.

The bottom line
Well the critic was correct, this P38 isn’t as accurate as a Marui Hi Capa 5.1. But the Hi-Capa is a fantasy gun – only mimicking the look of a custom 1911. This particular pistol is a good representation of an actual P38, which it’s supposed to be. If you’re a collector, a military re-enactor or are simply curious about the classic P38 and want one without spending a ton of money, this Walther gun is made for you.±± 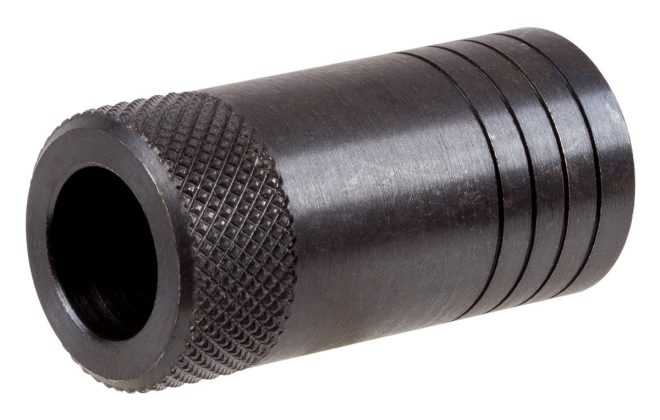