Essentials of an outdoor range

This one is for JP. He wanted to know what’s important about an outdoor range. I’m using my experience setting up the sight-in range of DIFTA, the Izaak Walton League field target club in Maryland. This will apply to all outdoor airgun ranges, whether they’re private or public.

The land
Obviously, you need a safe area behind the targets. This is usually an earth berm, but sometimes it’s nothing more than distance across land that can’t be traversed by people. You need at least 300 yards. Though an airgun will shoot up to 500 yards, you aren’t going to elevate the muzzle on your range. A lake can be good, and so can the ocean, but you need to be aware that you’ll be shooting lead pellets into the water. While lead isn’t as toxic as people would have you believe, it’s poisonous to wildlife, so make your land choices accordingly. An earth berm is ideal.

What doesn’t work.
Trees are poor backstops because the pellets damage the tree and can kill it if it is small enough or already infested with insects. The sides of garages and houses are also bad. I used our garage wall as a backstop when I was a teenager and when I was done, the soft pine clapboards were riddled with pellets. Hit with a powerful rifle like a Condor, the pellet will go straight through the wall and damage whatever is inside. 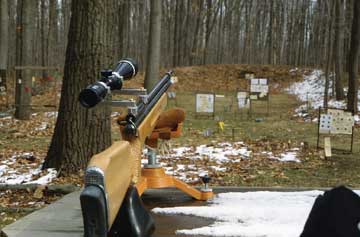 The DIFTA sight-in airgun range serves hundreds of members. It has a covered shooting line and target frames marked with measured distances out to 50 yards. The berm is a former handgun range berm, so it’s overkill for airguns.

Shooting area
The shooting area is important for comfort and for measuring distances to all the targets. You will want to know exactly how far it is to each target frame so there’s never the need to guess. Once the shooting bench is spotted, it shouldn’t move. If it does, there needs to be a firing line on the range to keep things in order.

Target frames
Permanent target frames make your job so much easier and faster. Use cardboard or better yet some waterproof board on the target frames so you can just staple the targets to the frame. The target frame should be movable and made from 1″x3″ lumber. Encourage your friends to not shoot the frames! They can be cut in half with fewer than 20 shots, and you’ll have the expense and trouble of making them again.

Permanent targets
Metal spinners can be left on the range all the time and make great plinking targets when you don’t want to staple paper targets to the frames. Limit the targets to clean ones that don’t make a mess. Don’t shoot bottles on your range unless they are made of plastic and you can clean them after shooting. A range that looks like a dump quickly disrupts the domestic tranquility.

Safety
Where will the pellets that ricochet to the side eventually end up? They won’t go as far as pellets going downrange, but plan on a safety range of at least half as far as the downrange distance.

Plan the range around people. Don’t let people walk downrange without the firing line knowing it so they can call a cease-fire. At DIFTA, we had to build a fence on two sides of the range to keep people back from the targets out to 20 yards, and even then it has to be watched. Pellets are invisible and the guns make so little sound that shooters quickly become complacent about safety.

Define the side limits of the range with markers that are easy to identify. Make them visible from the firing line.

Well, those are some of the most important tips for outdoor ranges. There are others, like storage for targets and equipment, access for cars, electricity for test equipment and so on. If you have a favorite tip to add, please feel free.