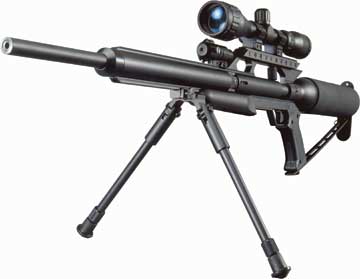 I was asked to write this report by SavageSam, who said the following:

I’m writing you to remind you to do a writeup on the AirForce Condor. Also you could split [your report] into what is Condor-specific and what applies to all the A.F. line. You asked me to ask you what I wanted to know, well here goes….I want to know what can be tinkered with, without voiding the warranty. Such as, adjusting the top hat vs. adjusting the power wheel. Installing a different barrel. Having a different valve spring in the bottle (mine does NOT care for a full fill) to help flatten out the rainbow velocity curve. Accessories (best bang for the buck scope) green daylight lasers. The micro-meter tank. Etc. From SavageSam

Andreas from Cyprus also asked for a very specific test of a .177 Condor shooting on high power with a Micro-Meter tank. He cannot legally own a .22 caliber airgun, nor can he own a CO2 gun, so his request is focused on getting the maximum number of shots from an air tank at a decent hunting power. He mentioned 15 foot-pounds, but I must say here and now, that would only be possible with a .22 caliber Condor using the Micro-Meter tank. I would expect the .177 to get 11-12 foot-pounds.

What is a Condor?
If you know anything about Condors, you know that we’re in for a grand time. The AirForce Condor is one of the most powerful smallbore air rifles made. I say “one of” only if we stay with the factory model. There’s a custom Condor that beats them all at 110+ foot-pounds in .25 caliber. I’m not going to test that one for this report, because, believe me, 65 foot-pounds is more than enough to play with. The Condor is also the most versatile air rifle made – hands down. It can be owner-modified in so many ways, plus there is a world of aftermarket accessories to go on it. It’s an airgun collection by itself.

The Condor was created by AirForce in 2004. It shares a similar frame with the Talon SS, but it is not identical. The only difference is that the Condor’s scope rail is two inches longer. You can spot that by the second hole in the rail that only the Condor has. There were a small number of Condors shipped on Talon SS frames, and an SS frame can be turned into a Condor rifle with a few modifications to the powerplant. Those are the similarities and differences between the SS and the Condor. The Talon frame is about four inches shorter than the SS and Condor frames.

The positive way to tell which model you have, since none of them are marked with the model name, is by the serial number found on the right side of the gun. A Talon will always be B00000. A Talon SS is BS00000 and a Condor is BC00000.

The entire purpose of the Condor is hunting. When it was created, AirForce thought the .177 model would not sell well in the U.S., but in other countries, like South Africa and in the United Kingdom, it would do better. That has pretty much been the way it’s gone, with .22 caliber accounting for over 95 percent of the U.S. sales. Now, however, Condor owners are starting to buy an optional .177 barrel for their guns and the sales of that caliber have picked up a little. And, .20 caliber was introduced by the factory last year, so all rifles are available in that caliber, as well. AirForce doesn’t make a .25 caliber, but a number of dealers offer it as a custom option.

SavageSam mentioned the “rainbow trajectory” of the rifle. Well, out to 50 yards a Condor can shoot pretty flat. Beyond 50 yards it does drop fast, as even a .22 long rifle will do. But, buying a high-speed .177 is not the solution to this. That’s because you cannot shoot the lighter pellet fast enough to stay flat and also remain accurate. With a Condor, you’re better off staying with .22 caliber and learning how your rifle shoots. 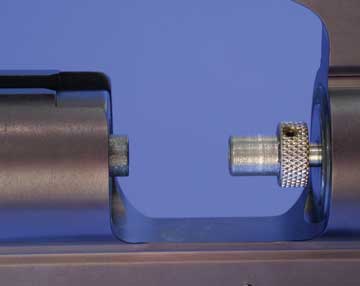 The top hat is the silver thing. The space behind the knurled ring determines how far open the valve can go, which means how long it can remain open. That’s the clearance you measure. Two Allen setscrews (one is showing) hold the hat in position on the valve stem, and on the Condor, they will dent the valve stem when tightened – so this is not something you do often. 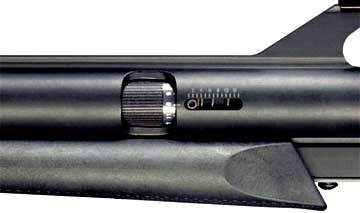 Power-adjust wheel on the left side of the frames of all AirForce rifles is the current way the power is adjusted. The numbers on the wheel and on the oval slot to the right are there for reference, only. THEY DO NOT CORRESPOND TO ANY VELOCITIES OR TO ANY EXACT VALUES.

However, adjusting the top hat is still quite popular with the owners of standard AirForce rifles (the Talon and the Talon SS). They’ve discovered that they can adjust the top hat, then use the power-adjustment wheel to fine-tune their work. They aren’t adjusting their rifles from low to high power the way many new AirForce owners do. They have found a single accurate pellet (most probably the 15.8-grain JSB Exact dome) and have adjusted the top hat to get the greatest number of shots from a fill of the tank at a power level they like. They may have found two settings on the power wheel that give them two very different velocities for two different kinds of shooting, such as plinking and hunting. And that is all the adjusting they do. That way, they know where their zero is and the gun can remain sighted-in.

There is NO WAY I can tell you all about adjusting the top hat; there are simply too many variables, plus these guns all seem to operate as individuals, so anything I tell you may not work on your rifle. The top hat leaves the factory adjusted to 0.080″ for a standard tank and 0.090″ for the Condor Hi-Flo tank.

I’ll give you an example of what some people do. When I was the technical director at AirForce, we had a customer who discovered that a clearance of 0.068″ under his Talon SS top hat, coupled with a certain setting on his power wheel, gave him 80 very uniform shots of .22 caliber Crosman Premiers at 800 f.p.s. If he adjusted to 0.072″, the uniformity was destroyed and the total number of shots was bad, as well. He used this very precise top hat clearance and didn’t adjust his gun any more.

SavageSam, if you do ANYTHING to the top hat of your Condor, simply open it up as far as it will go and still allow the cocking knob to swing closed into the notch on either side of the cocking slot. That’s going to be as much as 0.094″ on some guns but less on others. The reason for this is air flow. The Condor is what it is because it allows a lot of air to flow. Restrict the flow by adjusting the top hat smaller than 0.090″, and you no longer have a Condor. In fact, when the gun was still new, I used to get returns for low power and many times I found the top hat had been adjusted in, because that was what they were talking about on the forum that day. Adjusting the top hat doesn’t void the warranty, but like I said, it also doesn’t help a Condor.

One final thought that I may come back to – barrel length. This isn’t rocket science. The way pneumatic guns work is that the longer time the pressurized air accelerates the pellet, the faster it will go. The Condor has a 24″ barrel, but some new buyers look at all the features on all three AirForce rifles and they decide it would be nice to have the Condor’s power in a quiet gun like the SS. They buy an optional 12″ .22-caliber barrel and an SS end cap and they make the switch. Lo and behold, their new short-barreled “Condor” now develops only half the power it did with the factory barrel, plus it isn’t really that quiet. You can buy a regular Talon and get the same performance, plus a lot more shots for a lot less money.

If you really want a quiet Condor, buy a bloop tube and attach it to the gun. They’re all over the internet.

Don’t own a chronograph? No problem!
After a few months of working on Condors, I stopped using the chrongraph to tell when the gun was shooting right. I could tell by the sound it made. I tested myself against a chronograph and I was able to tell within 25 f.p.s. (up to 1,200 f.p.s.) the velocity a .22 caliber Condor was shooting by the sound, alone. That held true for shooting in the old AirForce plant, only. Apparently the acoustics were perfect for that.

But there’s an even easier way. A .22 caliber Condor will drive a Beeman Kodiak pellet through the short dimension of 1.5 soft wood 2x4s. A .177 Condor will shoot through the same wood with Kodiaks. If it does that, it’s a Condor – I don’t care what the clock says!

Next time, I’ll tell you about filling the tank.

53 thoughts on “The AirForce Condor – Part 1 A universal air rifle?”