Guest blogger
Wayne Burns is a new reader of this blog, though he’s been an airgunner most of his life. But he’s learning about new kinds of airguns here, and sharing those experiences with us. Today, he tells us about a modification he made to his Benjamin Discovery rifle.

Discovery barrel – to glue or not to glue

My brother-in-law’s Discovery and mine. Both .22 caliber.

I’m not an experienced airgunner, but I got the bug bad . So bad, in fact, that I thought other babyboomers must be getting it, too. So, I’ve been testing low- to mid-priced air rifles with the intent of opening an air rifle range in the near future.

When I read B.B.’s reviews of the Benjamin Discovery, a gun he helped design, I got excited like a million others and got in my order at Pyramyd Air. The wait was worth it. I must have been one of the first to get one, because my review at PA (without the pump) is at the bottom of the list now.

In the beginning, I really didn’t notice that the barrel could flex back and forth with easy finger pressure. After about 2,000 very fun and mostly accurate shots, I noticed the flex and was sort of outraged. Then, I said to myself, “It’s been shooting fine, the air tank protects the barrel from getting wacked, and light gauge material keeps it low cost and light weight.” BUT how can it be as accurate as it could be, if the barrel flexes? Without much thought, I removed the fill cap and put a couple of drops of Super Glue right where the barrel touches the air tank near the fill cap (being sure to not get glue where the cap goes on). I let it dry overnight, and the next day no flex. 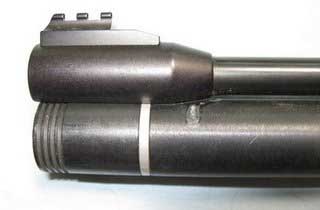 >My sloppy glue job with super glue. Note that I took off the fill cap before gluing.

I promptly complained to B.B. about the “flexing” barrel in this forum, (I should have complained before the gluing) and B.B.s’ polite reply was:

I have to caution others to not Super Glue the barrel to the reservoir. The reservoir moves as air is exhausted and if the barrel is attached, it will walk as the pressure changes.

What did I do?
I wrote back and said something like, “It seems to still shoot as accurate as before.”

But, I wasn’t sure. Because, as the pressure in the tank drops below about 1,200 psi, the pellets hit lower because of lower velocity. But B.B.’s comment made me think that maybe they were dropping because the air tank was pulling down on the barrel as the pressure went down.

I told B.B., “My brother-in-law, Randy, has a Discovery I gave him for his birthday that is not glued.” (He waited to see what happened to mine.) “Maybe I could do some sort of test.” B.B. said, “Why not make it a blog?” So, here we are.

At what pressure do pellets start dropping from lack of velocity? When we know that, we can see if the pellets from glued or unglued barrels are dropping differently. I thought it was after about 30 or 35 shots in my rifle when I fill it to 2,200 psi.

The test
My test was to have Randy and me shoot each rifle down to the red sector on the gauge with the same type pellet.

First attempts at testing failed due to human error. It’s too hard to know what is human factor, pellet factor or scope movement. All three proved to be problems.

So, I bought two Benchmaster rifle rests at a local shop. They eliminated the human factor, pretty much. 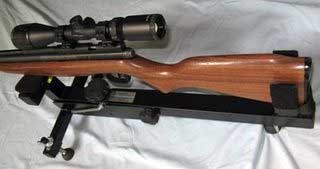 The Benchmaster, the cadillac of rifle rests, is similar in function to the Gamo Air Rifle Rest.

Next, which pellet?
While testing for the best pellet, we found that the 4-16×50 Leapers scope on my rifle would not stay adjusted, so we changed to the rock-solid 3-9×40 CenterPoint on each rifle. They’re not as great for field target, but fine for this indoor test at 60 feet.

After much testing, we found that the 15.8-grain .22 cal JBS Exact Jumbo pellets were just a little better than the 14.3-grain Crosman Premiers. Premiers average 791 fps, and the heavier JBS was 773 fps.

First, we shot the non-glued Discovery to find out at what point it dropped from lack of pressure. Then, how much the glued Discovery dropped at the same point on the pressure gauge. Not very high tech, but that’s all I could think of.

What the heck?
Randy filled to 2,200 psi and had a problem. This is a problem some other novice airgunners might run into with the Discovery, so, at this point, I will just show you my email to B.B. (Tom Gaylord).

Randy filled his rifle from the new tank, so it got filled to about 2,200 psi. He started the test having not shot his Discovery for a few weeks, so when the first shots were low, he adjusted his scope accordingly and found the center for awhile. Then his shots started going higher. He adjusted the scope again to the center and stayed on target (see target number 4). By this time, he had fired about 45 shots. Then his pressure continued to drop and he got a great 6 shot group 1-1/2″ low. Then the needle on the gauge went into the the red and his next shot dropped a full 3″.

He didn’t tell me what he was doing. When I heard, I showed him the crony test from earlier. It matched his results. We both wondered why it has less power and shoots slower with more pressure in the tank. Here are some photos from that first test.

This makes our test more difficult, don’t you think? HELP! 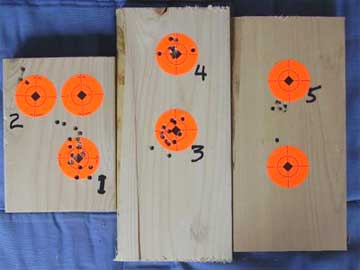 52 shots at ~60 feet, indoors with the air tank filled to about 2,200 psi. These were before we were using the Benchmaster.

You are encountering valve lock. A valve is balanced to the pressure at which it operates. When I designed the Discovery, I told Crosman that an airgun could be just as powerful at 1,800 psi as it was at 3,000 psi. They didn’t believe me, but when they built the first prototype, they discovered that it worked.

Even YOU are over-pressurizing your gun by filling to 2000. The proper fill level is the pressure at which the first shot comes out at full power.

Shoot the gun until the velocity rises to what you consider to be the ideal velocity. That sounds like 820 for your rifle. Then stop shooting and try to fill the gun at that point. Note the pressure at which the gun begins accepting air. I’m guessing your rifle will like a fill of 1,800 psi. They will each differ a little, so don’t go by the 2000 psi on the gauge. Learn the fill your rifle likes, then fill to that level and stop.

Because a car doesn’t work that way, you say. Well, neither does an airgun. There is a range of pressure at which the valve opens to the maximum and stays open the longest time. Within that range you will get the maximum velocity that valve is capable of delivering. Tests have shown that the Discovery gets 21-26 shots in a tight velocity spread. Some people will shoot up to 35 shots because they will accept a larger velocity spread. A person shooting groups at 50 yards will notice a POI shift resulting from a velocity variation sooner than a person shooting groups at 10 yards.

You mention opening a scuba tank’s valve when the tank pressure gets to 2100 psi. You think that is okay. I shudder, because you are overfilling the gun. Think of going to the gas station and, after your car’s tank is full, you pump the rest of the gas out on the ground, so the number on the pump reaches an even number of gallons. That’s what you are doing when you fill like that.

Stop looking at the numbers and start learning your rifle’s individual performance characteristics.

Starting over
We had to start over, initially filling until the Discovery gauge reached about 1,800 psi. With the guns filled to 1,800 psi and shooting off the bench rests, we shot a few more tanks of air – only trying for 30 to 35 shots. 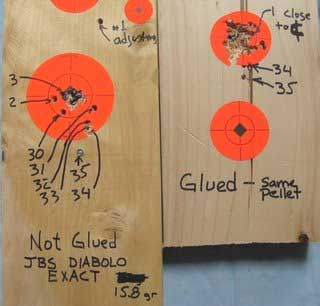 It’s hard to tell with 35 shots on one target, but the non-glued barrel did a little better on the first 35-shot test.

In this first test, the non-glued barrel had the best 35-shot group. We found it better to shoot groups of five at different targets, so we could see more detail. Notice that when you shoot over and over at the same spot on a thick board, it will break…and that’s a 2×6!

We eventually found that our guns did best starting at 1,700 psi, and going for only 20 or 25 shots if we didn’t want to change our aimpoint. If you’re willing to adjust for the different impact point that comes from a lower velocity (aiming high for the first 10 shots or so, then right on for 20 to 25 shots, then high for the last 10 shots or so), you can get 40 or 50 shots on a tank filled to 2,000. It’s not so hard to learn how to adjust your aim, and worth it, if you’re hunting. For shots over 30 yds., I have to start aiming high anyway.

In the second test, with both guns filled to only 1,700 psi, the gun with the glued barrel did a little better than the one that wasn’t glued. I noticed that the chrony and the accuracy say that shots 1 and 20 are close to the same when starting at 1,700 lbs. Keep in mind that you still have 10 or 12 more shots if you want to aim high, but they still have enough wallop to kill a starling at 25 yds. 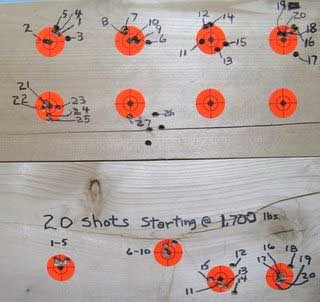 The glued barrel (lower board) did a little better in the second test with only 20 or 25 shots.

Conclusion
If it really bothers you (like it did me), it probably won’t hurt to glue your barrel. It could be that the cheap super glue I bought flexes enough to give with the movement of the tank. Or, the air tank is strong enough to not flex as the internal pressure drops. [Note: It isn’t – Ed.] By far, the more important factor for accuracy in the Discovery is the proper fill pressure. Then get to know where the valve lock occurs and how it affects accuracy in your particular gun…if you want to stretch the number of shots you get from a fill.

Another fix, is to add another barrel band, or move the one closer to the end if you think the flex is a problem at all.

75 thoughts on “Discovery barrel – to glue or not to glue”