The other day I was reflecting on how much some of my airguns and firearms had grown in value in a very short time. The Whiscombe JW75 we bought for $2,300 in 1996 is now worth over $5,000 according to the open offers I see for them. Then, I reflected on the status of the M1 carbine. A carbine I bought for $800 five years ago sold for $1,200 just three years later. It hasn’t increased much since then, but still, that’s a healthy increase.

Three things drive the prices on collectible guns – be they airguns or firearms: rarity, condition and desirability. Take the M1 carbine as an example. Over 6.5 million were made in four years during World War II. Probably more than 4 million survive today. But some of those that do survive have been re-imported into the U.S., which means they have an importer’s mark on the barrel near the muzzle. While they’re nice shooters, don’t look for those guns to increase in value as fast. Many carbines are an assemblage of parts put together by civilians after the war. They have negligible collector value. Some others are just plain “beaters,” so used that they have lost all collector value.

But get a good carbine – one that is “right,” and you have an item that has steadily increased in value since the 1950s, when the NRA was selling them for $20. A carbine in very good condition today is worth $800 on up – depending on who made it and the condition.

So it is with airguns. There are some models that won’t be worth more than their purchase price for perhaps a decade or more. But a nice Crosman 600 pistol will bring $250-300 in the box if it hasn’t been fooled with.

Let me tell you about a gun that you can actually still find for less than it is worth: the FWB 124 breakbarrel. A nice one today still brings only $350-400, though the real price should probably be around $600 or more. Many 124s have now been extensively customized and lost their collector value. Original stocks have been lost, guns have been buffed and reblued, and barrels have been cut down in an attempt to personalize the gun for one owner. While such a gun gives pride to one person, it sheds any collector value for all other buyers. At some point in the not-too-distant future, people will realize what a nice, untouched 124 is worth, and the days of the $400 bargain rifle will become just a pleasant memory.

About eight years ago, I was offered the opportunity to buy a 124 that had been customized by the Beeman factory in the mid-1980s. Normally, such customization would have ruined any collector value, but this was an exception. The work had been done for Mrs. Beeman, herself. The person from whom I purchased the rifle had placed a custom order and the salesperson remarked that it sounded a lot like the gun just made for Mrs. Beeman. So, the person asked if Mrs. Beeman could take a later custom gun and allow this one to be sold. When she called back a week later, she was told that Mrs. Beeman had agreed, so the rifle intended for her was sold instead. And, then, I was offered a chance to buy it. 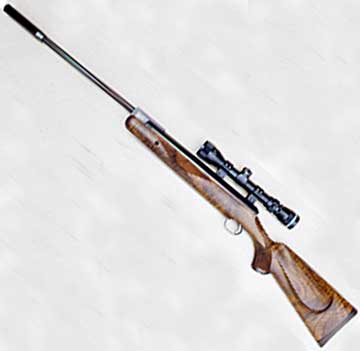 The rifle I call the Queen B is a gorgeous FWB 124, stocked with highly figured walnut. 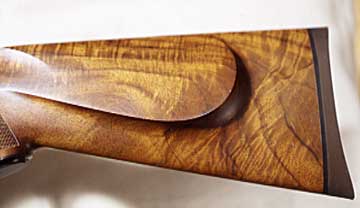 Here’s a close look at the stock. 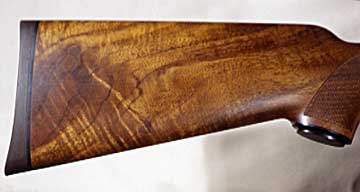 Almost as pretty on the other side.

The stock was made by a master stockmaker – perhaps even Hugh de Pentheny O’Kelly, who worked for Beeman for a time in the 1980s. Not only was the fine-line checkering cut flawlessly – the entire shape of the stock felt just right in my hands. I have a Krieghoff .30/06 with the same feel, and I gave $1,500 for that rifle in the 1970s.

I was delighted to acquire this rifle for $600 at a time when an average FWB 124 D was selling for $275. I wrote about it in Airgun Revue magazine, and I confirmed the story of the sale with Mrs. Beeman at the SHOT Show. Indeed, she did step aside and let this one be sold, and I heard her say it.

The rifle had been tuned by Beeman, too. In those days, the state of tuning for a 124 was not as advanced as it is today, and a lot of the result depended on the individual rifle. This one shot 7.9-grain Crosman Premiers right at 800 f.p.s., with just a little buzz on the shot. The trigger, however, was perfect. The second stage released with about 1.5 lbs. of force and absolutely no creep. I’ve never felt another 124 trigger as good.

Unfortunately, I told the seller she had the first right of refusal if I ever sold, and three years later I had to sell the gun. I didn’t make anything on it (my choice), but I had an offer in the wings for $1,200 if she refused. I suppose that rifle is still increasing in value because of that gorgeous stock and also because of the association with Mrs. Beeman.

My point is this – there’s money to be made by careful investing in airguns. Some hot-ticket items may be overpriced currently, but a careful investor should be able to make a nice return with a little luck.

60 thoughts on “Airguns as investments The Queen B FWB 124”