We looked at target mechanisms and methods of permanent emplacement last time. Today, I’ll focus on the details of target hardware, especially the stuff that can prevent the target from working.

Not so simple
When you first see a field target, you’re impressed by its simplicity. After running several matches, however, you’ll reverse that opinion and wonder how something that appears so simple can also be so complex. On the surface, it seems like you just run a length of string out to the target and reset it every time it goes down. In a perfect world (or a perfect vacuum–I forget which), that would work. In the real world, though, reset strings unravel, or they cut themselves on the sharp edges of targets or they get snagged in the target mechanism, making it impossible to reset the target. So, field target shooters have learned a few fixes that improve the reliability of the targets greatly.

Swivels
The first tip is to use fishing swivels and leaders with snap fasteners as attachment hardware for both the targets and the reset strings. That way, all you have to do is snap a string swivel to a target swivel and you’re done. And don’t buy cheap ones like I used to. I would buy a large bag of generic swivels at K-Mart and attach them to everything. But one or two matches later, my cheap hardware was itself causing as many problems as the bare string had caused. Other club members bought better-quality swivels that lasted for many seasons. Mine quit after a couple of matches. The cheap, uncoated steel swivel stops swiveling after one exposure to moisture, while the plated or solid brass or stainless swivel almost never freezes up.

Knotty situation
You need a swiveling action because the twine you use to reset the target is made from twisted fiber. In essence, the reset string is a long spring. As you pull and release, it tries to twist based on the alignment of the strands. Swivels cancel this motion, rendering it inconsequential. Without swivels, your strings soon start tying themselves in knots down by the target.

Tangled target strings!
When some targets fall, they pull on the reset strings with considerable force. This can pull the string into contact with the target mechanism, where it will get snarled. Many clubs tie a rubber band to the base of the target and to the reset string, so no matter how hard the target pulls the string when it falls, the rubber band always pulls the reset string free of the target mechanism afterward. When these are fresh, they work like a champ. After several exposures to sunlight, the rubber bands lose their elasticity and start breaking. Rather than use these temporary measured, I like to use targets that don’t exhibit the string-pulling tendency. 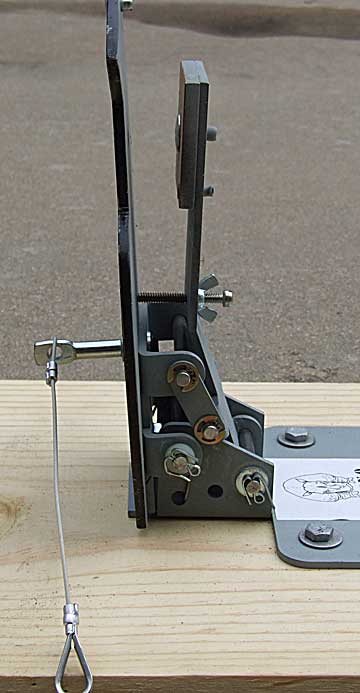 The After Hours target has high-quality hardware. Look at the cable to which the reset string is attached. A target made this way will operate reliably for years without the problems mentioned here. 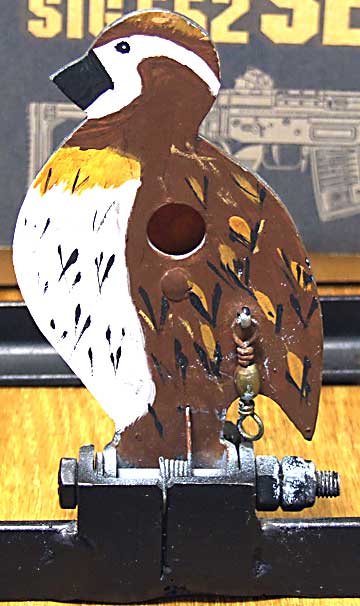 This little quail target was made by Ulysses Payne. It’s too pretty to shoot, so I use it as my demonstration target. Notice that the maker installed a brass swivel on the target face for attaching the reset spring. This target has a bright orange paddle that you cannot actually see because of a shadow. That happens on a field target course all the time. 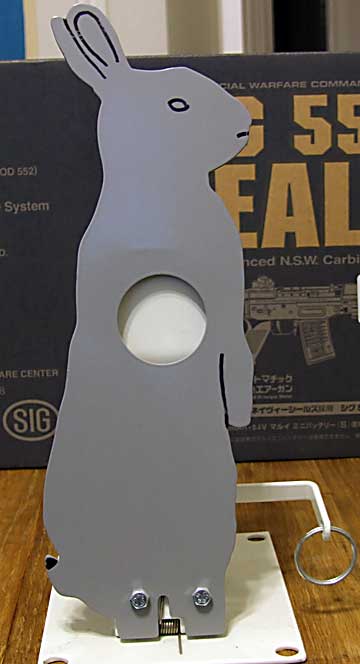 Air Arms bunny target solves the reset string tangle problem by holding the string attachment point out to the side. They use a circular clip instead of a swivel as the attachment point.

Maintaining reset strings!
When you make a new reset string, make it at least 65 yards long. You can do this quickly by measuring the string with your hands and arms. One span (holding your hands as far apart as you can) is approximately the same as your height, so if you are six feet tall, measure 33 spans of string. As the strings age, they break and the break is usually very close to the target. If the string is long, you can cut some off, attach a swivel and still have the maximum length string for a 55-yard target. You’ll get close to a decade of use from a string this way.

Repainting targets during the match
Not all clubs do this but I always repainted the field targets in the middle of the match. I used the lunch break to do it, and with two people working it took only 10 minutes to paint 30 targets. Each painter carries a can of flat black and a can of international orange spray paint. The paddle is painted orange and the target is painted black. I used a cardboard mask to protect the paddle as I painted the target. It takes about 30 seconds to paint a target, which will dry in 10 minutes.

After a target has taken 25-30 hits, the definition around the kill zone is lost. You can’t tell where the kill zone is because everything is shiny gray. When you see this through a scope under certain light conditions, it’s impossible to see any details. Those who argue against painting during a match say that no one paints game animals for hunters, which is true, but game animals also don’t wear a shiny silver breastplate. Field target is a sport, and I see nothing wrong with maintaining the equipment in the middle of a match, which is, after all, a contrived event. So, when I’m the match director, we repaint.

What about pretty targets?
You may have seen some field targets that are painted more like actual game animals than the flat black targets I mentioned. Some of them are real art. I have a theory about that. A beautifully painted target is a delight to see, but after it gets shot it has to be painstakingly repainted. At an amusement park where I used to work, they painted all the steel targets on the shooting gallery with lead paint that never hardened. It was easy to repaint the targets and backstop once a week because of how everything was painted, and that’s my philosophy for field targets, too. If I have just one, I paint it like a work of art; if I have 30 to maintain, I paint ’em all black. The one exception I made was the club mascot – Long Tom – a life-sized turkey target we placed out at 50 yards. I repainted Long Tom with natural colors for the state match every year. That was the one and only concession I made to artfully painted targets.

Next time, I’ll talk about scorecards.

52 thoughts on “Starting your own field target club: Target hardware and maintenance”