These seems to be a lot of interest in spring gun harmonics. The report on the B26-2 brought it out. Thinking back, my 5-part report about the Whiscombe JW-75 centered on accuracy based on adjusting the Harmonic Optimized Tuning System (HOTS). I demonstrated how a harmonic tuner on the barrel of a spring rifle can tighten groups. Maybe you haven’t read that report yet, so the link I provided will take you to the last part, where you’ll find links to the previous 4 parts. Read that entire report to understand how this vibration tuner works.

Many of you want to know more. Back in my Airgun Letter days, I tested both a harmonic tuner from Vortek, which was commercially available for several years, as well as a custom one made for me by Dennis Quackenbush. I mounted the Vortek brake on my Beeman R1 and tested the Quackenbush prototype on a Webley Patriot. Both guns showed improvement, with the Patriot showing the most dramatic results. I thought I’d share that data with you today.

Vortek harmonic tuner
Vortek’s tuner is a muzzlebrake that fits a variety of breakbarrel spring rifles including the Beeman R1 that had the Vortek. It’s a slip fit over the muzzle of the gun and three Allen screws snug it to the barrel. It’s very important to make this device snug; if it isn’t, it can’t do its job. It has to act as an integral part of the barrel.

Vortek adjustable muzzlebrake has three screws holding it to barrel and one lock screw for the adjustment. Unit is 5″ long.

At the muzzle end of the brake is a knurled wheel that screws in either direction, adjusting up and down an interior weight in the brake. The wheel has a ratchet mechanism, so you can feel when it turns. Where this weight is positioned determines how the brake vibrates, thereby affecting the vibration of the barrel to which it’s attached. The weight that moves is not a heavy one. An Allen screw locks the wheel in place once you have it where you want it.

I had to adjust the wheel a lot to see a small change in the group size. At the time I tested this device, the best .22 caliber pellet for my R1 was the Crosman Premier. I would imagine that has changed with the arrival of the JSB Exact 14.8-grain pellet, but I haven’t tested them in this gun. 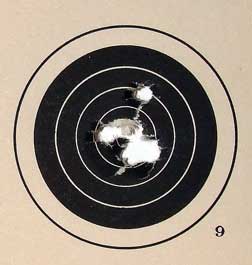 With the tuner adjusted in a bad spot, this is the result of 5 Premiers at 20 yards. 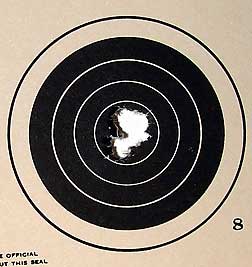 When the tuner is adjusted properly, the same 5 shots look like this.

The Vortek is 5″ long and brightly polished and blued. All parts are made of steel.

As I recall, the Vortek device sold for about $20. It may have been a little higher. In those days (the late 1990s), airgunners were not as fond of breakbarrels as they are today. The TX200 and HW77 were the biggest sellers, and since they couldn’t use this device, the sales were never that great. It was commercially available for many years in the late 1990s, but the demand just wasn’t there. I don’t remember exactly when it stopped selling, but it must have been before 2002.

The other vibration tuner I tested was made for me by Dennis Quackenbush. It screwed into the muzzle threads of a Webley Patriot, where the Brits would attach a silencer. It adjusted via a large, hollow Allen screw that was also the muzzle of the brake. The weight that moved was very heavy – several ounces. It made dramatic changes in group size with Beeman Kodiak pellets. If memory serves, groups were reduced by half at 25 yards.

I no longer have this brake or any photos of it. It was about 7″ long and the weight was a knurled section about an inch long at the end. The brake was blued, but the weight was left in the white.

Dennis made the brake to test the effectiveness of the theory. He may have made more than just one, but he never made them for production.