Chuck is a reader who posted a lengthy comment about blind-testing a batch of IZH 61 clips. His methods were sound, so I asked him to turn it into a guest blog for everyone.

I bought an IZH-61 for myself a while back and liked it so much that I bought one for each of my three grandkids. I had their 6 magazines and my 2 for a total of 8 magazines, so I developed a blind test.

I marked each gun and mag with each child’s first initial in case a gun or mag got or lost so there’d be no arguing over whose it was. This made it easy for me to identify each magazine for the test, but only under close inspection because I used a black marker on the black mags.

Testing procedure
I assure you I did not know whose magazine I was shooting with, yet, after a batch of 8 magazines, I knew which magazine to match up with which target. Next, before shooting, I mixed up all the magazines and laid them out in the order of the targets. I then shot them in that order, matched and labeled them on their targets; I mixed them up again and shot another batch at 8 different targets. That was 2 batches of 8 magazines each, 5 shots per target, 16 targets, for a total of 80 shots, hence a fatigue and concentration issue. I had to concentrate harder on the second round of 8.

My range is indoors and 10 yards, I used the same Bug Buster scoped gun with Beeman H&N Match Wadcutters (8.0 grains). I used them because I had a lot, and I had previously weighed each one on an electronic scale.

Test results for batches 1 & 2
What I found was that a magazine that produced under 1/2″ groups on the first batch of 8 magazines did worse on the second batch and vice versa. Of the 16 targets, all groups were 3/4″ or better. Five were pretty close to 1/4″. One magazine that did the worst on the first batch of 8 did the best on the second (must have been the pit stop).

The first 3 targets of each batch of 8 were inside 1/2″–I think due to my being more rested. The magazines that did not shoot inside 1/2″ I re-shot after a rest period and got them inside a 1/2″ (picture not shown so you’ll have to take my word for it).

While shooting may not be physically fatiguing, it’s definitely mentally fatiguing for me. I get what pro golfers call the yips, especially if I’m excited from shooting great groups. If you know any golfers, ask them about the yips. I’ll bet you get shooters’ yips, too. 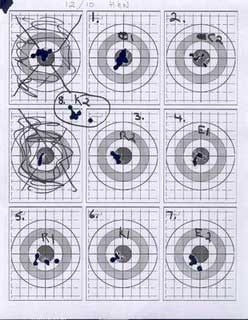 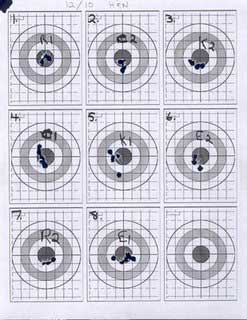 Notice the strange location of target 8 (K2) on batch 1 (left target). Sorry for this sloppy batch, but I shot 2 warm up targets, then ran out of targets on this page so I aimed for the intersection of the lines formed by the block of four targets (2 practice–target 1 and target 3).

Look at batch 2, target 4. Vertical stringing–that has to be me!

Test results for batch 3
The next day I did a similar test with just one batch of 8 magazines, but with a different pellet (no weighed). Ouch, I had somehow become a worse shot overnight. None of my groupings were as good as the night before. Three targets had fliers that went 2 or 3 rings out from center. Only one group was smaller than 1/2″. 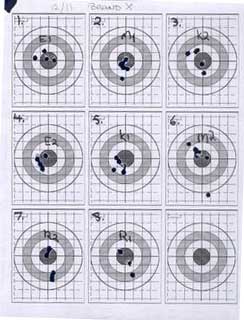 Test results for batch 4
I waited another day and tried the same test but this time with weighed pellets. I didn’t have any radical fliers this time (or maybe they were all radical fliers) but all my groups were still larger than 1/2″. 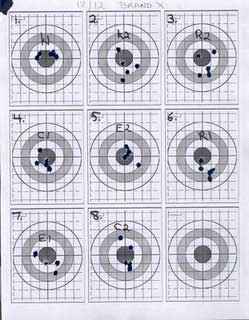 Wrap up
I then took 2 mags that had the worst groups and shot the same pellets with them. Still got bad groups. Well, you’ve probably guessed what my next test was. Yep, I went back to the H&N Wadcutters in those two mags and started shooting 1/4″-1/2″ groups again. This doesn’t necessarily mean the second brand of pellets are bad. It only means they’re different for this gun or for me. I don’t understand it, but it seems to be so. It could even be psychological if I think brand A is superior and my brain automatically concentrates better.

Conclusion
I believe my bad groupings in this test were due to lack of experience, shooter fatigue, lack of concentration, ill-spaced pit stops and/or pellet dynamics, and not magazine properties. When I gain more experience and find that pellet that is right for me and after my grandkids have broken in their magazines more, I will retry this test if for no other reason than my own amazement and amusement.

Post mortem
After completing my tests I took a close look at the mechanics of how the pellets are loaded into the gun barrel. In the IZH-61 owner’s manual, Figure 1 shows a follower (item #8). It’s a machined rod that is tapered toward the front, the part that goes into the receiver (item #44). The tapered part is about a half-inch long, smaller in diameter than the opening in the back of a pellet and is the part that rams the pellet into the receiver. The smaller rod also has a somewhat pointed tip that contacts the small indentation inside the skirt of the pellet to help guide it. The larger part of the rod is the diameter of the receiver opening. The rod is pushed forward when you cock the gun, and it shoves the pellet about 3/4″ or so into the receiver because about 1/4″ of the larger part of the rod goes in, too, to block any air blowback (I imagine).

It’s my opinion that when the pellet is shoved into the receiver 3/4″ by the rod, there won’t be any influence on the pellet’s orientation from the magazine at its final stopping position. However, I suppose a magazine could be defective enough to damage the pellet skirt in such a way that the movement into the receiver and down the barrel doesn’t straighten it out. In that case, I think it would be easy to visually identify the defect.

Bottom line
I had a whole lot of fun playing with this issue and fun is why I took up this sport in the first place. As an added bonus, I think I became a somewhat better shooter. I can’t wait to see how a peep site will do on a test like this. Again, whoever it was who mentioned this in the first place, please come up with more thought-provoking ideas for me.