Before I begin, I have a big announcement for all those who own vintage CO2 guns. Pyramyd Air now stocks the 8-gram CO2 cartridges that so many vintage guns need. Guns like all of the old Benjamins, the Plainsman BB gun, the Schimel and other guns of the early 1950s. You can see them here.

The Alfa Competition pistol is one I have wanted to test for three years. I’m so glad to finally be testing it for you.

On the surface, this looks like the CO2 pistol that Air Arms sold several years ago, and indeed it was created from that gun. But you don’t just pump air into a CO2 gun and expect the exact same valve to work. At least you didn’t until the Benjamin Discovery came out. But that rifle operates on 2,000 psi air pressure. If it used 3,000 psi, the CO2 operation would be curtailed.

So, some design changes had to be made before the Alfa pistol would work with air. I want you to notice that this pistol has its air reservoir in the butt instead of a tank slung underneath the barrel. That design was part of the economy of moving from CO2 to air, but it does mean this gun gets fewer shots that fall within the power curve than a pistol that has a much large separate air tank.

First things first
The first things I do with a new 10-meter pistol are adjust the trigger, set the sights and adjust the grip. The grip on the Alfa Competition pistol has no adjustments, so there’s nothing to do. I measured the width across the widest spot in the grip, and it’s just less than 50mm, so the gun will fit in the qualifying 50mm box that all international competition guns must fit.

On the minus side, there’s no adjustable grip shelf. Fortunately, the grip on this pistol fits my hand very well that way, but if I were keeping the gun I would do some major reshaping of the wood. And the reason for that is the huge plus this gun offers.

Ambidextrous grip!
This is the first fully ambidextrous target grip I’ve ever seen on a competition pistol. Lefties get to play right alongside righties with nothing more to purchase. Of course, that means some tradeoffs had to be made, but a wood rasp and sandpaper can correct that. And no competitive shooter ever fits a grip so perfectly that some adjustment isn’t required.

Adjustable trigger
Next, I adjusted the trigger. It adjusts for pull weight, length of first stage, one or two-stage operation, distance from the frame to the trigger blade, rotation of the trigger blade around the bar that holds it, angle of trigger blade on the bar that holds it (don’t worry, a photo will make this clear) and the overtravel that stops the trigger’s movement after the gun has fired. Like any 10-meter pistol trigger, adjusting one thing may change the settings of something else, so it took about a half hour to get everything the way I like. Fortunately, this pistol has a dry-fire training setting, so the trigger can be cocked and fired repeatedly without exhausting any air. 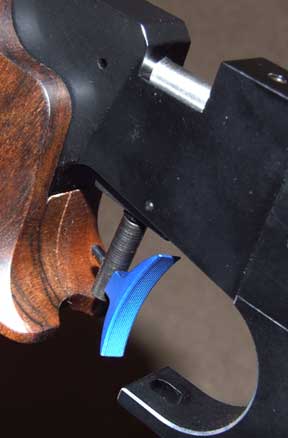 The trigger was adjusted to stick out to the side like this. I could have canted the trigger blade as well, but I chose to leave it straight up and down.

The ambidextrous grip is thicker than a normal grip, so the trigger had to be set up to accommodate that, and after shaping the grip it might have to be adjusted again. However, I was able to get things exactly where they felt the best with the standard grip that came with the gun.

Once set up, the trigger is without fault. I can easily identify stage two and there is zero creep in that stage. This is the lowest-priced 10-meter pistol I can say that about, for the IZH 46M does have some creep in stage two.

As you may remember, the international rule for a trigger on a 10-meter pistol is that it must hold a 500-gram weight. That’s just over 18 oz. So I set this one up at about 19 oz. to be safe.

The dry-fire training mechanism is one that allows you to sight and fire a shot without releasing air or firing a pellet. Competitive shooters use the feature about five times more often than they shoot pellets, and a world-class shooter shoots about one complete match a day with pellets. 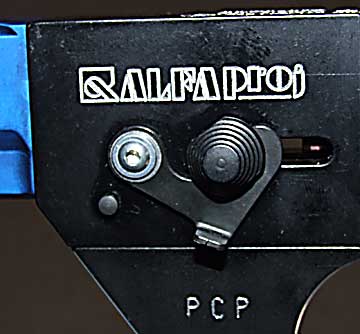 With the hook behind the cocking button (one on each side of the gun) you are in the dry-fire mode.

The pistol weighs a light 907.18 grams (exactly 2 lbs.) and comes with a 172.9-gram (6.1 oz.) removable weight. That’s pretty light for me, so I positioned the weight close to the front of the track and it stabilized the gun very well.

The gun’s velocity can be adjusted, as can many of the finer PCP target guns today. What I need to do is find a good pellet, then select a velocity that gives me the greatest number of useful shots on a single fill. Hopefully, that number will be larger than 60, so a complete man’s match can be shot on a single fill. But for international competition, you need at least 70 good shots, because if you make it to the final round there are 10 more shots to be fired. 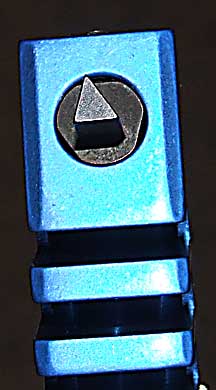 The front sight post can be rotated to present any of three widths, to suit your taste.

Is it accurate?
That’s the big question everyone wants to know. Other budget 10-meter pistols sell on the basis of accuracy, and this one has to be as good or better to keep up. In traditional European fashion, the test target is attached to the Alfa’s operation manual and serial-numbered to the gun, so there is no mistake. If you’re not familiar with 10-meter pistols, this target may look like a lie, but rest assured that it is about what to expect from any world-class target pistol. Of course the Alfa sells for several times less than other world-class pistols, so there’s a story here and that’s why I’m so happy to finally test the gun.

Test target group is pasted to the back page of the operating manual.

Because this PCP-10 meter pistol has additional features that the lower-priced 10-meter pistols don’t have, I’ll probably have to do a more involved test. Just getting the right pellet could be a chore, and then trying to maximize the power setting after that promises to stretch out the time on this one. 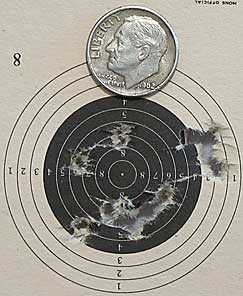