The Tell’s spring was a bit of a stumper at first. 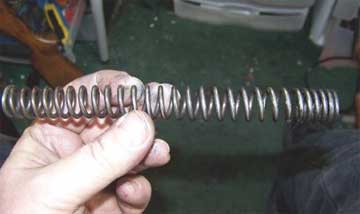 As you can see, it exhibits significant spring fatigue at one end. Or does it? Normally, those closed coils would raise a flag; but in this particular case, I really don’t think so for four reasons. First, the collapsed coils are all grouped together. Second, they’re at the end of the spring. Third, the spring itself is pretty straight–it’s odd that so many coils would fatigue and yield so evenly. Lastly, the coils gradually get spaced further apart as they get further away from the end of the spring.

This, I believe, is an ordinary variable-rate coil spring. As the spring is compressed, the closely spaced coils at the end quickly stack up, effectively reducing the number of active coils in the spring. It starts out relatively soft but stiffens up more rapidly than a standard spring as it is compressed. Variable-rate springs in themselves are not terribly unusual, especially in automotive applications (suspension and valve train, for example); but this is the first time I’ve seen one in a spring gun.

Moving into the gun itself, something catches my eye…something not nice catches my eye. Inside the spring tube, I see a bunch of circumferential grooves that don’t look like they’re from the piston, since that sort of wear would tend to be parallel to the axis of the tube and not perpendicular to it. I’m concluding that these marks are from the original machining process, not from use: 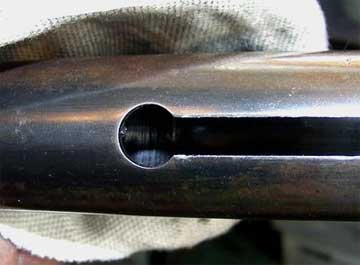 Grooves in the compression area. 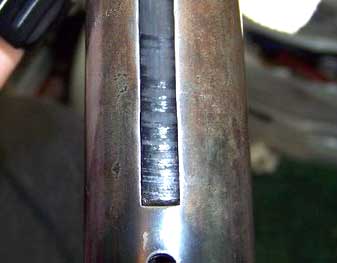 Grooves in the spring area.

In any event, it doesn’t really matter. Since the seal is leather it’ll be quite tolerant of this sort of thing. I hone it out and reassemble the powerplant after gooping up the spring with Mystic JT6 MP grease and moly powder mix. 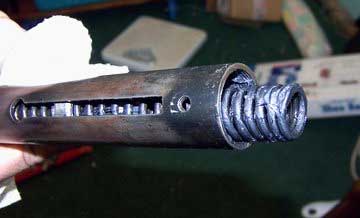 This is a grease. I’m not using tar on a low-powered springer like this one.

The rest of the reassembly is a reverse of the disassembly process. The relatively low spring preload pressure means I can just push it together with my hands.

During this process, I’d noticed that the stock was loose. Exactly how it is retained at all is a bit of a mystery at first, since there are no obvious screws holding it to the action. This means there’s only one other possibility, and pulling the buttplate off the rear of the stock uncovers the stud and nut that holds it together. 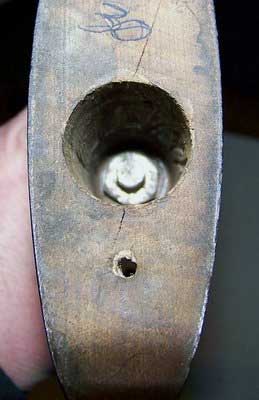 A few twists with a 17mm socket on an extension tightens the stock nicely.

The single-piece trigger is showing some obvious wear, and this explains why it was unreliable when I first tried it. 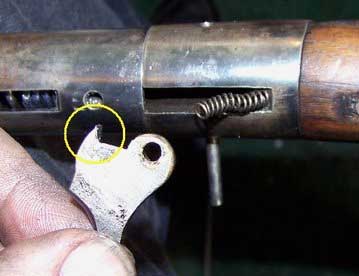 Worn sear. The spring is fine despite how it looks.

There’s not a lot of sear “meat” left to work with, so I just go real conservative on regrinding the sear angle so I KNOW it isn’t gonna let go. I went a little too far, and the trigger now takes more effort than it probably needs to. But considering how little metal there is in front of it, I decide not to risk any further refacing.

Now that the rear half of the gun is taken care of, I move to the front and that troublesome pivot. It comes apart with a spanner driver on the nut. 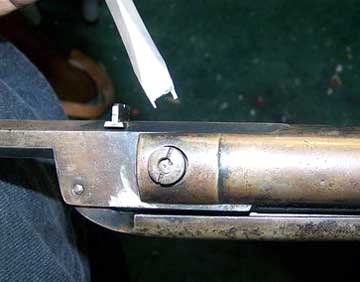 The tool is homemade. Obviously.

The lockup is pretty standard, although you can see the unusual practice of making the block and barrel all from one piece. The little screw in the second picture retains the locking wedge, making it a breeze to disassemble for cleanup and relube. The breech seal is pretty beat and gets replaced. 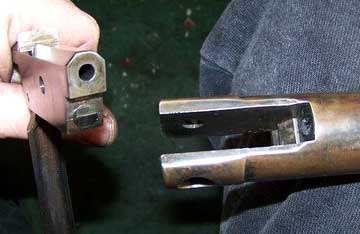 The breech seal is in the compression tube, not the barrel. 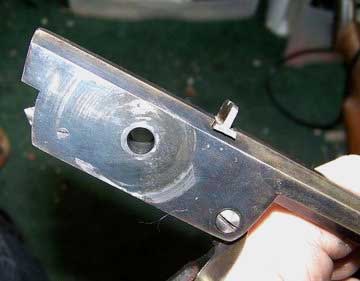 All milled from a single piece of steel. 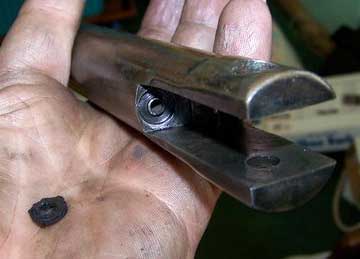 A standard o-ring will replace the breech seal.

Vince continues on Monday with part 3 of the Tell discovery tour!