I became a writer because I was angry. I thought that people who knew things about shooting and airguns didn’t want to share them with others. The more I wrote, though, the more I discovered that often there wasn’t anybody who knew the things I wanted to know. And if someone did know something, they tended to show only the parts that looked cool. One example of this might be how to properly hold a handgun in a rested position.

I just looked in three books about handguns, and between them they contain hundreds of action pictures of shooters shooting guns so fast that there are several shells in the air and the slides are caught partially open. Cool! But in those same three books, only one contains two pictures showing a rested hold! Yet, the rested hold is infinitely more accurate than an action hold. It just doesn’t look as pretty.

Holding a handgun for long-range shooting may not look cool, but it does make a huge difference in the long-range accuracy of any handgun. Matt correctly guessed that I learned a lot of my handgun techniques from Elmer Keith. Although I’ve never met him, he was my trainer for a lot of handgun shooting knowledge.

For those who don’t know him, Elmer Keith is one of the most respected, and the most controversial gun writers who ever lived. He invented the .44 Magnum cartridge and talked the firearm community (S&W and Ruger) into making guns for it. Some of the shots he took, such as killing a mule deer buck at 600 yards with a .44 Magnum revolver, hitting the animal two times out of four shots, were the reasons many people called him a liar. You can learn more about him on the website for the Elmer Keith Memorial Shoot. The people there write just like me, and we all have similar experiences.

I read Keith before I entered the Army (where I was formally trained to shoot), so I had no frame of reference as to whether he was a liar or a really good shot. I just believed him and tried the things he wrote about until they worked for me, too. Things like hitting a man-sized rock at 300 yards with a Colt 1860 .44 cap-and-ball revolver and repeatedly hitting a football-sized dirt clod at 80 yards with a snub-nosed .38. The people who witnessed these shots told me beforehand they were impossible. Afterward, they became converts, just as I was a believer in Keith’s writing. 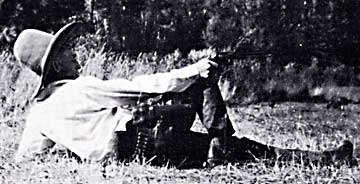 Elmer Keith lying in what we would today call a modified Creedmore position. He rests his shooting hand against his knee and braces himself with his other arm. From the book Sixguns, by Keith, published by Stackpole, copyright by Keith, 1955. 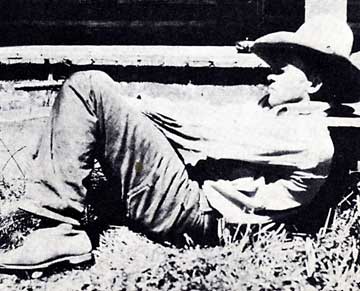 Elmer Keith in his classic rested position, both hands clamped between the knees for support. From the book Sixguns, by Keith, published by Stackpole, copyright by Keith, 1955. 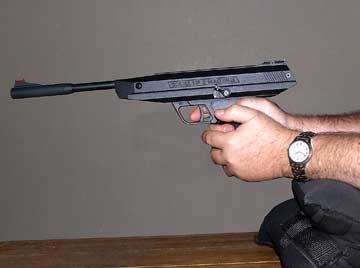 My own recommended handgun rested position. The weight is borne by the bag, so the hands do not move. The wrists are free to move with recoil, and the gun touches only the hands. With this type of handgun rest, I can do my most accurate long-range handgun work. It’s great for recoiling air pistols such as this RWS LP8.

It comes from experience
When I wrote The Airgun Letter, I tested lots of air pistols. Readers wanted to know how accurate they were and everyone told me to clamp them in a vice. Well, there are many huge problems with that, starting with not all guns respond well to being clamped. Some want to be handheld. However, I’m not the world’s most accurate handgunner, so how can we tell how well a pistol shoots when I am the one testing it and have to hold it in my hands? I needed to find a repeatable and positive way to hold the gun to wring out the last possible bit of accuracy, despite my own shortcomings.

I remembered my early years and all the fantastic shooting I had done by following Keith’s writings, so I concocted a way to recreate that on a standard rifle range, using equipment that was normally available. Later on, I read how other firearm handgun writers test their guns, and they don’t all use a Ransom Rest. Several shoot off a bag, holding exactly as you see me doing in the photo above.

However, I cannot find anyone who shows this hold in a picture or even describes it. It may exist, I just haven’t found it. I see several commercial pistol rests that allow the pistol to touch the rest in front, but that would be the opposite of what I’m suggesting. These rests may work very well, but I have no experience with them and cannot offer an opinion. If any readers use a pistol rest, I wish they would please contribute to this discussion.

How to fill a precharged gun from a scuba tank