Before I begin, I have to tell you that my illness and the bad weather we have had here in Texas (rain for two straight weeks!) has kept me from getting out to the range to finish the Blizzard test. I’m really anxious to see if I’m right about the baffles being the cause of the inaccurate shooting. But I can’t go in the rain, because the range won’t support it.

It’s been close to two months since we last visited this curious target rifle from East Germany. Today, I’ll look at accuracy and throw in a couple surprises to boot!

A funny thing happened…
I guess getting to know this Haenel has been a voyage of discovery for me. Remember that I mistakenly listed the model as the 303-8 Super and then I found the model number stamped on top of the spring tube? It’s really a model 303 Super, which must have preceded the 303-8 Super.

Well, the funny things keep right on happening. This time it’s the front sight. One of our readers suggested that it was mounted backwards on the rifle, so I obligingly turned it around. As it turns out, though, it shoots too far to the left in that configuration, so I had to mount it the way it originally came to get in the bull at 10 meters. There’s an old saying, “If it ain’t broke–don’t fix it.” I guess that applies here.

While trying to sight in, I discovered that the rear peep sight has an extremely limited range of windage adjustment. There’s also the provision of moving the entire rear aperture mechanism to the right or left, but even that turned out not to be enough adjustment for the rifle, so I reversed the front sight and got on target after that.

And then it came to me…
Much later, after the shooting was finished, I learned that the rear sight isn’t as range-limited as I initially thought. It’s just a very simple design that has gotten dirty over the years, so I took it apart and cleaned all the mating surfaces. The sight is so simple inside that, once it was clean and lubricated with Break Free, it went back together and works perfectly. I wish I had known how easy it is to clean this sight before the test.

I decided not to shoot 10-shot groups with this rifle. In the end that turned out well because I shot more targets than I normally would.

Round one – Chinese wadcutters
Okay, you can’t buy these anymore, but I still have a few tins and they often shoot very well in certain real target airguns. In the case of the 303 Super, they were the best–at least on the first round. 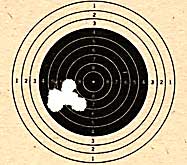 Five Chinese wadcutter target pellets made this group at 10 meters. It was the tightest group of the first round. In fact, if the others hadn’t done any worse, this would have been the only round.

Round one – JSB Match
This was my first time trying JSB Match pellets in a target rifle. I expected them to equal H&N and RWS target pellets. 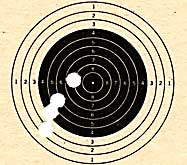 Well, this was a surprise. I expected a better group from these JSBs.

Round one – RWS R-10
I expected RWS R-10 pellets to be the best of all. Usually, they’re either first or tied for first when shot from a target air rifle. 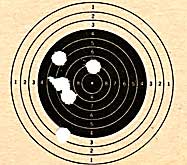 RWS R-10 pellets at 10 meters. Given the first target, something is wrong with the rifle.

Another funny thing…
The JSB group was uncertain, but the RWS R-10 group told me something was wrong with the rifle. Not that every rifle should shoot R-10s accurately, but no rifle should group like this one did with the Chinese wadcutters and then spray R-10s all over the bull. I had noticed that the barrel wasn’t holding itself in position after it was cocked, so the pivot joint was loose, and this group confirmed it. So, out came the screwdrivers and all the stock screws plus the pivot joint screw were tightened. They were all loose. Now you understand why there had to be a round two.

Round two – Chinese wadcutters
On this go-around I sighted with the greatest precision. The rifle was rested on the backs of my fingers and the flat bottom of the forearm assisted in getting the same hold, shot after shot. 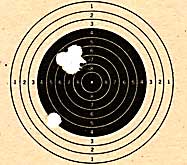 Another good group of Chinese wadcutters, only this one has a flyer that wasn’t called. It could have been a damaged pellet. Note the point of impact has changed since the first group, yet no sight adjustment was made.

Round two – JSB Match
This time, I got what I expected from JSB Match pellets. In fact, that was the best group of the session. 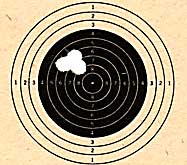 This cloverleaf was made by five JSB Match pellets at 10 meters. This is what I expected the rifle to do.

Round two – RWS R-10
I fully expected the RWS R-10 pellets to out-shoot the other two. But I was wrong. 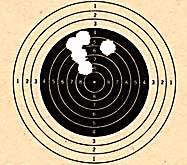 Imagine my surprise to see this open group from RWS R-10 pellets. This just illustrates that every gun will shoot different pellets differently.

Observations
The Haenel 303 Super isn’t quite the target rifle that an HW 55 is. The reason for that may be because this rifle has been tuned by someone. I found moly grease on the baseblock and the automatic safety wasn’t working–two good clues that someone has been inside. The 303 trigger has a lot of creep in the second stage, though it releases light enough. But it’s not a Rekord, and you can easily tell the difference. Also, the stock is much blockier and doesn’t hold as nice as a 55. But the main difference is that the 303 isn’t quite as accurate as a 55, and that’s the one thing that really counts with a target rifle. 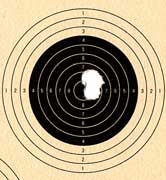 Five RWS Hobbys grouped like this at 10 meters from a rest with the HW 55SF.

On the other hand, the chief attraction of the 303 is its price. You’re only going to find it used, and it costs quite a bit less than a used HW 55 of any configuration. That makes a big difference to shooters on a budget. For everyone in that category and anyone who just wants something a little different, the 303 Super is a great rifle to find.