I’ve begun familiarizing myself with the SAM 10.

Before I begin, thank you for all your suggestions about my failure with the Massimo yesterday. I think Kevin came closest when he said I was too rushed. I’m sure it sounded like that in my writing. And I felt rushed. But I also was stumped about the results I got, and you guys have given me plenty of things to think about. Now, on to today’s report.

In the time since the last report, I’ve been adjusting and shooting my new SAM 10. I loaded most of the mandatory 500-gram trigger-pull weight into the first stage of the trigger, so stage two breaks with about an additional 50 grams or so. The rear sight notch had to be widened a bit, so I could see some daylight on either side of the front post. That helped me pick up exactly where the front sight is against the bull. And I’ve dry-fired the gun several hundred times. I also shot 20 pellets at an actual 10-meter target, and the results weren’t too pretty, I can tell you.

I’m currently testing pellets to discover the most accurate style and size. But that’s not what today is about. Today, we’ll see what kind of velocity the pistol has.

Filling the gun
The SAM 10 came with two air tanks that screw into the front of the receiver. They had to be filled, so I attached the adapter to a Hill pump and started pumping. The SAM can take a fill of 300 bar, but the first fill was only to 200 bar (2900 psi). That should be good for around 100 shots because 300 bar gets you about 220 shots.

Funny story about filling 10-meter tanks–and this also applies to target rifle tanks. The tanks do not contain the firing valve. All they have is a retention valve, so they can be removed from the gun at any time. When they’re screwed into the gun or into the fill adapter, a valve stem at the end of the tank is opened mechanically and the tank can be filled. That’s important to know, because it determines how you connect to the scuba tank or pump. When connecting, the bleed screw MUST be closed; as the tank is screwed home, the valve opens and the tank exhausts air. That air will be contained in the hose and base of the pump unless you leave the bleed screw open–which I did, the first time I filled a tank. Before I could react, the tank emptied itself. Because I was using the pump to fill the tank, the lesson was ingrained in my consciousness on the first try.

Vogel target pellets
Vogel pellets have an interesting history. They used to be made in Germany, but Scott Pilkington brought the brand to the United States and now makes the pellets in Monteagle, Tennessee. Vogels have won top honors in World Cup competition in the past, and I took the opportunity of Scott being at the Roanoke airgun show this year to buy a tin for evaluation. I bought the pellets with a 4.50mm diameter head. They weigh 8.1 grains.

Vogels averaged 450 f.p.s. with a spread from 444 to 460. Fourteen feet per second seems a bit high for a regulated gun, but that may not have any affect on accuracy.

JSB Match S100
JSB Match S100 pellets were next. This is a JSB pellet that Pyramyd Air used to stock and may still do so, but they’re out as of this time. They weigh 8.2 grains and averaged 462 f.p.s., with a spread from 457 to 470. That’s a little tighter, but still not what I expected from this gun. This pellet has a 4.52mm head size and may perform differently in the gun.

Adjustable power
You may recall that one of the many adjustments this pistol has is for velocity. To access the adjustment you must first remove the grips. The adjustment screw is located at the rear of the receiver. Screw in for more velocity and out for less. For this evaluation, I decided to use the H&N Match pellets, because at present they are shooting fastest in the pistol. 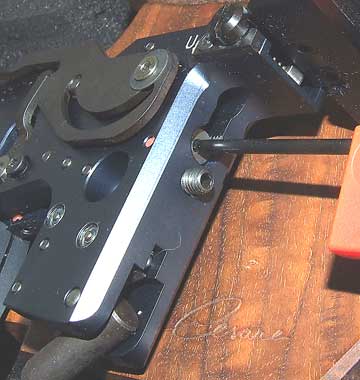 The adjustment screw for power/velocity is at the back of the receiver. The grips must come off to get to it.

With one complete turn in on the power screw, the velocity increased to 505 f.p.s. Another full turn did not advance it at all. That was also the limit the screw could be turned in. So, 505 is the top speed with this particular pellet. Two complete turns in the other direction took me back to the start, and the speed was 482 f.p.s. That’s close enough to the average to be right on. One turn to the negative, and the speed dropped to 469. One more turn, and the speed dropped to 411. The gun didn’t sound as though it liked that speed very much. It just sounded hollow and a bit flat. Hard to describe, but if you had been in the room you would have heard it. Two turns back to the start, and the speed was 486 f.p.s. So, once again, right on.

Performance with the spare tank
What the heck…I decided to install the spare tank–the one without the manometer– and see if the velocity was still in the same range. I couldn’t, though, because there was no air in the tank. It had bled down entirely from a 200-bar fill the week before. The tank should hold a full charge indefinitely, so this one has to go in for repairs. In the U.S., Scott Pilkington at pilkguns.com is the best 10-meter repair station around. Scott travels with the U.S. Olympic team and services their airguns at every Olympics. I would trust him to do anything on my gun.

Where are we?
Well, I now know a lot more about the pistol than I did. And I’ve adjusted it pretty close to how I want it, though there’s still some grip work to be done. Now, I have to learn how to shoot 10-meter all over again. Fortunately, there are a couple of instructional tutorials on the internet that I can follow 🙂 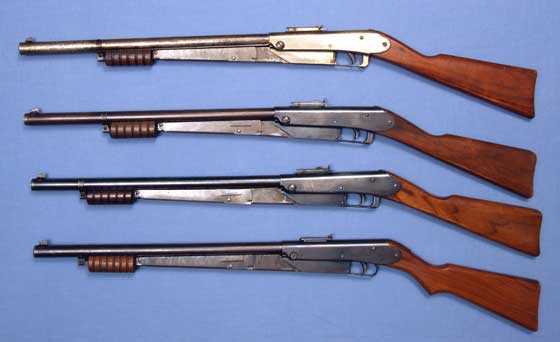 Can you keep a clean barrel with Crosman Premier pellets?