Well, today’s report on the Colt Defender BB pistol dovetails nicely into yesterday’s report on concealed carry handguns. Because the Defender is just that–a single-stack, single-action .45 ACP, a variation on the 1911A1 frame that sports a 3-inch barrel. It’s Colt’s version of the concealed carry 1911s that have been around for 30 years. 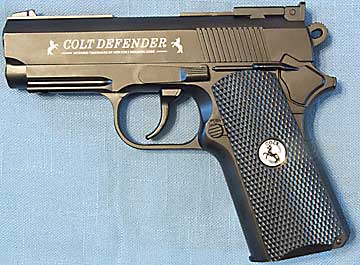 The Defender came to market in 1999, about 20 years after Colt’s competition had first marketed their own compact 1911s, starting with the Detonics. But late though it was, the Defender carries the Colt name that adds value to anything it’s put on. Even BB guns, like the one I’m looking at today. 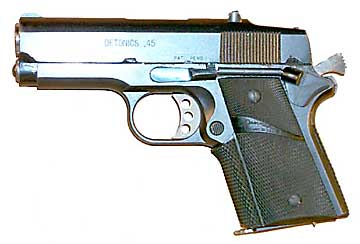 It comes in a clamshell pack. When I got the gun out, I was surprised by the weight. I handed it to Edith, who had a similar reaction. It’s good when a BB gun has some mass, and this one certainly does.The specs say it weighs 1.6 lbs., and in this small a package that makes an impression.

Of course, this pistol is powered by CO2. The cartridge is housed in the grip, but the BB magazine is built right into the frame of the gun! A spring-loaded follower is pushed down out of the way and locked in place at the bottom of the grip. BBs can then be poured into a funnel-like opening in the grip frame, where they’re steered into the magazine channel. It’s a slick setup, and one that I’m excited to try. 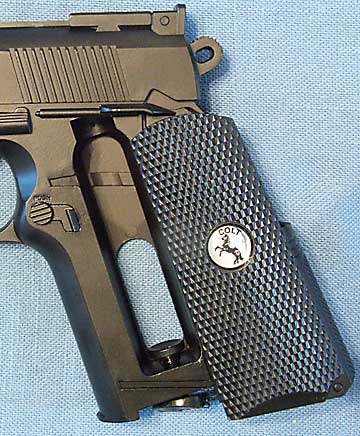 Push the mag release and the grips jump back to reveal where the CO2 cartridge goes. 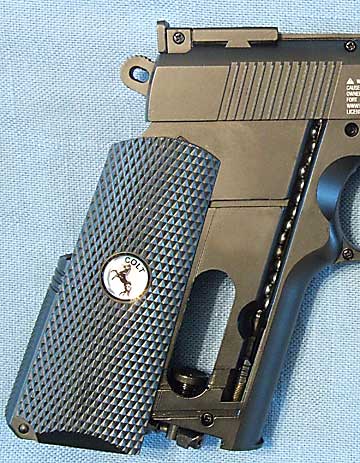 BB magazine is built into the frame of the pistol.

The gun is dark black and non-reflective. The trigger is not a copy of the Defender trigger because this BB pistol is double-action, while the firearm is single-action. The grip is on the fat side, and the trigger blade is slightly too far forward for my average hands to reach. I can still shoot the gun, but things don’t fall within easy reach.

The hammer and most of the controls, such as the safety, are simply cast into the metal frame of the gun. The real safety is a switch mounted on the right side of the frame. The mag release button on the left side releases the grip panels, which can then be pulled back to reveal the CO2 chamber.

The sights are fixed, front and rear, though the designers went out of their way to make the rear sight appear to be adjustable. The front sight has a white dot in the center of the post, but there’s nothing that corresponds on the rear sight.

The barrel of the gun is also the hammer. How that works: the barrel moves forward against a spring as the trigger is pulled; upon its release, it jumps back suddenly to whack the firing valve. 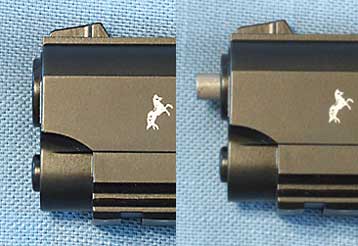 Pulling the trigger pushes the barrel forward until it is released to knock open the valve (right).

A light rail is provided beneath the slide and in front of the triggerguard. Enthusiasts can mount a laser they can then adjust to coincide with the impact of the BB.

Power seems to be on the hot side, at a rated 440 f.p.s. That means a lot of bouncebacks, so be sure everybody is wearing safety glasses. I’ll count the number of shots per cartridge when I test the velocity.

I’ll combine accuracy and velocity testing next time, to speed this report along.